Yves here. This is a classic from Peter Dorman which we missed when originally published, so we are grateful to Angry Bear for featuring it.

By Peter Dorman, an economist and a professor at Evergreen State College whose writing and speaking focuses on carbon policy, child labor and the global financial crisis. Originally published at EconoSpeak

You would know this if you read your Cahuc, Carcillo and Zylberberg, but you probably won’t, so read this instead. 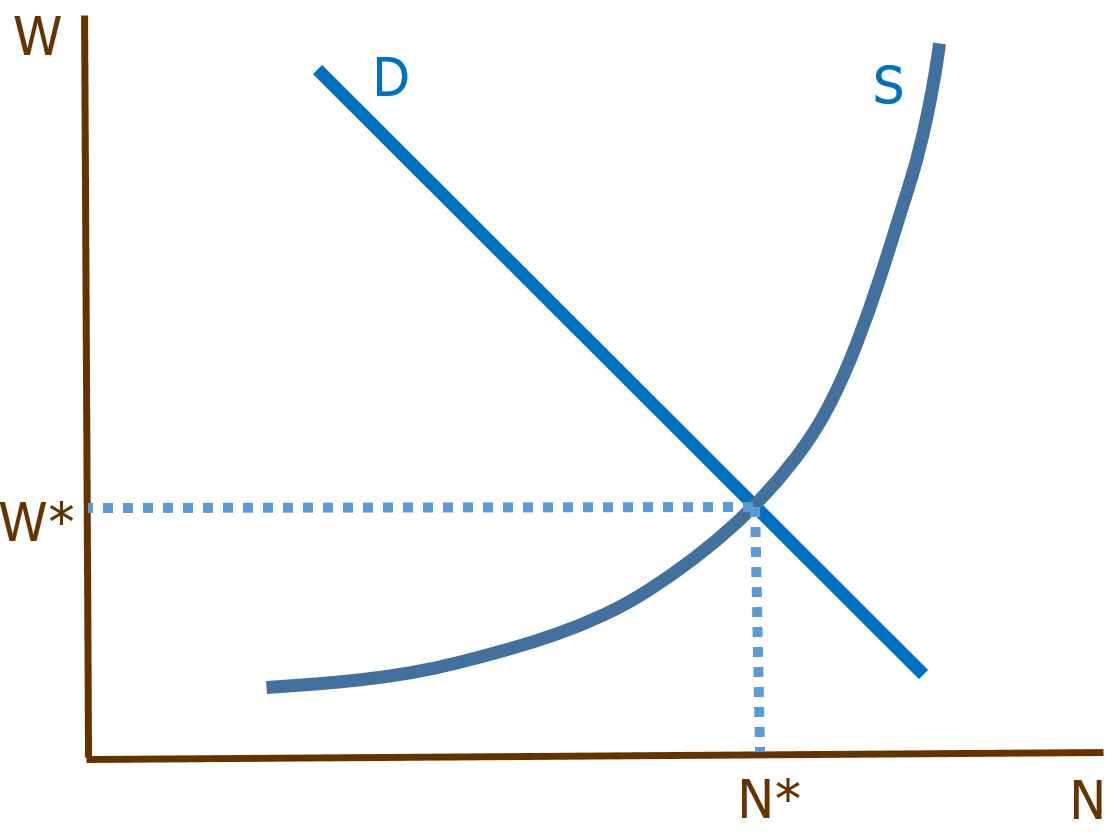 It’s common to use W (wage) on the price axis and N (number of workers) on the quantity axis.  Equilibrium is supposed to occur at the W where quantity supplied equals quantity demanded.  From here you might introduce statutory minimum wage laws, or jobs with different nonpecuniary benefits and costs, etc.  The default conclusion is that free markets are best.

They would be the same in a world in which labor markets operated according to a two-sided instantaneous matching algorithm, something designed by Google with no human interference at any stage of the process.  In such a world all offers would enter a digital hopper, and all deemed acceptable by someone else’s algorithm would be accepted immediately.  Maybe not Google but Priceline.

But that’s not the world we live in.  Finding out about job openings and job applicants is somewhat haphazard and time-consuming.  Applicants and jobs differ from one another in lots of obscure, subtle but crucial ways.  You really wouldn’t want an algorithm to make these decisions.  And so only some workers who offer their labor, even at what might be an equilibrium wage rate, are taken on, and only some job openings workers willingly apply for are filled.  When we measure unemployment and vacancies à la JOLTS, we are not seeing offers but changes in actual employment and disemployment.

So let’s redraw that diagram. 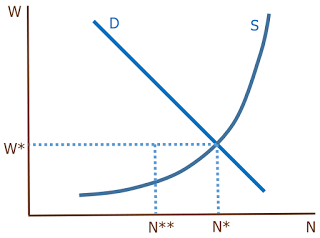 To the left of N*, the equilibrium number of employment offers, we find N**, the number of workers whose offers have actually been accepted and are now on the job.  A little reflection should be enough to indicate that S&D is a lousy way to frame this distinction.

First of all, what determines this gap between wanting to work (or fill a job) and actually working (or filling it)?  What does this apparatus tell you about N*–N**?  Nothing.  It isn’t built to answer that question, and it doesn’t answer it.

But it’s worse.  The apparatus indicates that N*–N** is the same on both sides of the market: the number of workers looking for work is exactly equal to the number of jobs looking for workers.  But why would we expect that to happen?  What reason is there to think that it’s equally easy for workers to find jobs and jobs to find workers?  On the contrary, the ratio of unemployed workers to job openings never falls to 1.0, or hasn’t since we’ve had JOLTS to inform us.

S&D is simply the wrong model, based on a failure to distinguish between offers and transactions.  Fortunately, there’s a better model out there, search theory, with fairly straightforward intuitions and tons of available data.

Anyone who waves an S&D model at me and makes claims about the labor market is simply advertising that they know less about economics than they think they do.