By Silvia Merler, who joined Bruegel as Affiliate Fellow at Bruegel in August 2013. Her main research interests include international macro and financial economics, central banking and EU institutions and policy making. Originally published at Breugel.

The New York Times has some interesting data visualisation about the growth of e-commerce jobs and the decline of retail sectors employment (Figure 1). Online shopping accounts for only 8.4 percent of all retail sales in the United States, but it has had an outsize effect on the retail workforce. The Financial Times has a graphical review of the recent stock market sell-off on retail department stores, spurred by mounting concerns about the effects of online competition. 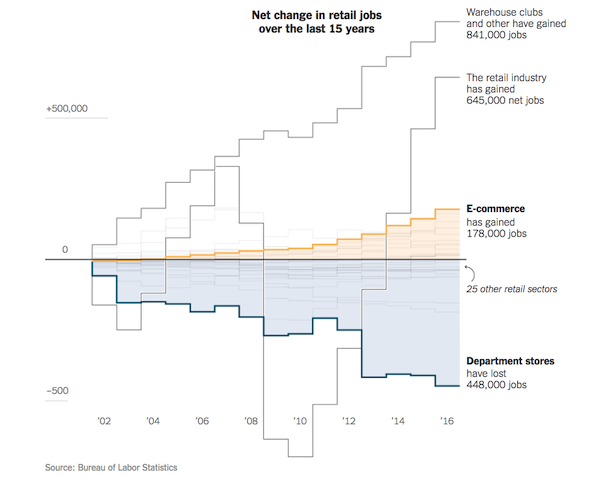 A related question would be what the implications are, not only for retailers and retail-property companies, but also for the financial firms that have given them money, from banks to life-insurance companies. The Economist argues that total amount of capital, both debt and equity, supporting American retailing (excluding Amazon) now exceeds $2.5trn. The hundreds of thousands of jobs created by new online firms have not absorbed the job losses at traditional retailers. At the same time, the new jobs are concentrated in a handful of large cities and tech hubs (Figure 2 from NYT). Examining property data from CBRE brokerage, The Economist argues that some cities with fewer shops per person, such as New York and Seattle, may fare better, but that few parts of the country will be untouched. 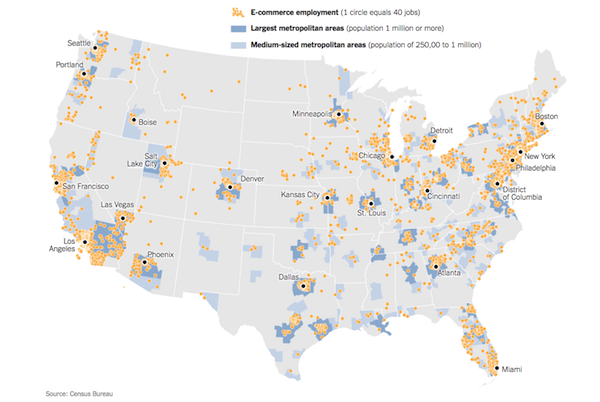 The Economist has calculated what might happen to retailing workers (excluding those who work in car and fuel sales), under various assumptions about the growth of e-commerce. Assuming that employment in stores rises or falls with changes in those stores’ sales, and that labour productivity improves at historical rates, retailing jobs could shrink by 12%, or 1.5m jobs, by 2022. Under the most adverse scenario, employment could fall by 17% (figure 3 below). 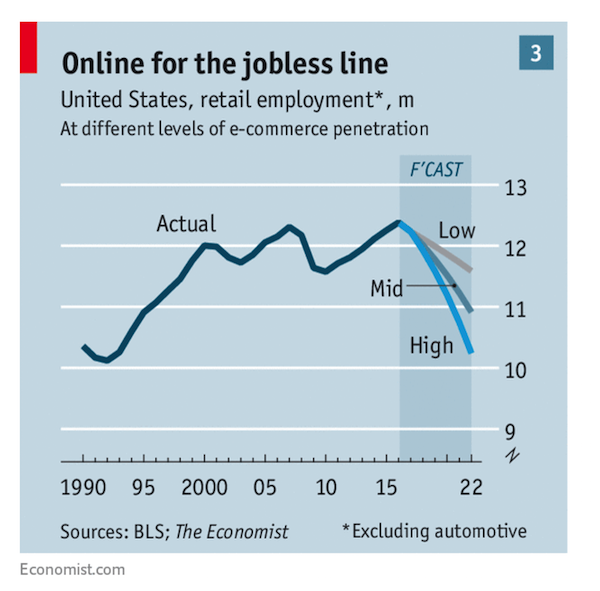 Paul Krugman wonders why aren’t promises to save service jobs as much a staple of political posturing as promises to save mining and manufacturing jobs? One answer might be that mines and factories sometimes act as anchors of local economies, so that their closing can devastate a community in a way shutting a retail outlet won’t. A different reason mining and manufacturing have become political footballs, while services haven’t, involves the need for villains. Demagogues can tell coal miners that liberals took away their jobs with environmental regulations. They can tell industrial workers that their jobs were taken away by nasty foreigners. By contrast, it’s really hard to blame either liberals or foreigners for, say, the decline of retail service jobs. Finally, it’s hard to escape the sense that manufacturing and especially mining get special consideration because their workers are a lot more likely to be male and significantly whiter than the workforce as a whole. As for what can be done to stop service-sector job cuts, Krugman thinks that there is not much. While we can’t stop job losses from happening, we can limit the human damage when they do happen, by guaranteeing health care and adequate retirement income for all, providing aid to the newly unemployed and acting to keep the overall economy strong.

Dean Baker at CEPR argues that Paul Krugman is wrong on retail jobs, and the reason why they are not salient is that they are not very good jobs. Jobs in mining and manufacturing tend to offer higher pay and are far more likely to come with health care and pension benefits than retail jobs. A worker who loses a job in these sectors is unlikely to find a comparable job elsewhere. In retail, the odds are that a person who loses a job will be able to find one with similar pay and benefits. In mining the average weekly wage is $1,450, in manufacturing it is $1,070, by comparison in retail it is just $555. This difference in job quality is apparent in the difference in separation rates by industry: it was 2.4 percent for the most recent month in manufacturing and 4.7 percent in retail, almost twice as high. Baker argues that since only a small segment of the workforce is going to be employed in manufacturing regardless of what we do on trade, we should be focused on making retail and other service sector jobs good jobs. For Baker, the number one item on the agenda should be a concern with the Fed’s rates hikes, which would slow the economy and reduce the rate of job creation.

Noah Smith argues that the retail apocalypse could actually lead to a suburban renaissance. Modern U.S. cities, especially the suburbs, are built around retail stores. If those stores evaporate into cloud servers, huge gaping holes will open up in the economic landscape of almost every suburb and town in the U.S.. The decline of physical retail will thus force the U.S. to rethink its entire idea of what a city is for. Why do people live near each other, if not to shop at the same places? One reason is to go out to eat. Another reason for people to cluster is to take advantage of schools, day-care facilities, hospitals and other local services. Rebuilding the suburbs will mean a lot of spending at the local and state level. Working-class Americans need jobs, and this sort of epic construction project would create a lot of them. If the retail apocalypse leads to a suburban renaissance, maybe it’s something to be relished rather than feared.