Jerri-Lynn here: Consider this a companion piece to a post by Yves last week–Quelle Surprise! Financial Firm Fines Are Way Down Under Trump— which discussed the falloff in fines levied by federal financial regulators in the first half of 2017 compared to 2016.

The EPA also appears to be as lackadaisical about enforcing federal environmental laws as financial regulators are concerned to police their respective statutory bailiwicks. This is only part and parcel of the administration’s vocal anti-environmental protection agenda, which also includes rescinding the Clean Water Rule and walking away from the– admittedly overhyped– Paris Climate Accords.

By Ashley Braun, a Seattle-based freelance science and environmental journalist. She works as a deputy editor for DeSmogBlog.com and is a contributing science writer for Natural History Magazine. Originally published at DeSmogBlog

It hasn’t taken long for Donald Trump to make his mark (well, many marks) on the U.S. Environmental Protection Agency (EPA). In the first six months in office, his EPA under Scott Pruitt has already seen a precipitous drop in enforcement for violators of major environmental laws, such as the Clean Air Act and Clean Water Act.

So far, the Trump administration has collected 60 percent less in fines for civil lawsuits against polluters on average, compared to the previous three administrations.

This information, which excludes Superfund and criminal cases, was highlighted in a report released today by the nonprofit Environmental Integrity Project.

“This report now illustrates that Scott Pruitt is unwilling or unable to carry out the basic statutory mission of the EPA, which is enforcement of our environmental laws,” said Judith Enck, former EPA administrator for Region 2, which covers New York, New Jersey, and Puerto Rico.

Enck expressed concern that this weak start to environmental enforcement would continue under Pruitt.

This is despite Pruitt’s stated desire to return the agency to its “core statutory mission” of protecting air, water, and land. In a May press release supporting Trump’s proposed 31 percent budget cut for EPA, Pruitt stated, “This budget supports EPA’s highest priorities with federal funding for priority work in infrastructure, air and water quality, and ensuring the safety of chemicals in the marketplace.”

That proposed budget would slash funding for enforcement by 23 percent. Even with current funding levels, the EPA under Pruitt has pursued fewer cases enforcing environmental protections and collected smaller fines — less than half the total amount of other administrations in their early days.

Eric Schaeffer, executive director of the Environmental Integrity Project and former Director of Civil Enforcement at EPA, suspects he knows a big reason for this drop under Pruitt.

“I think there’s a management gap,” he said.

“You can’t run EPA and you certainly can’t run enforcement with photo ops and showing up and doing a wave and leaving after ten minutes. It’s very hard work. You have to have people who know the business and you have to put them in charge and you have to empower them to do the work. And I just don’t think this is the focus for them.”

Schaeffer pointed to what he saw as the focus instead for the current administration: “The leadership in EPA is very focused on rollback. They never talk about enforcement. The agenda is to knock out as many rules as possible and change as many environmentally friendly policies as possible.”

As of July 1, The New York Times reported that “Scott Pruitt has moved to undo, delay, or otherwise block more than 30 environmental rules, a regulatory rollback larger in scope than any other over so short a time in the agency’s 47-year history, according to experts in environmental law.”

Those efforts aren’t particularly surprising. During his tenure as attorney general of Oklahoma, Pruitt sued the EPA at least 14 times, but not because the federal agency’s actions weren’t strong enough to keep Oklahoma air, land, and water clean.

“In all but one of these 14 cases, regulated industry players also were parties. And these companies or trade associations in 13 of these cases were also financial contributors to Mr. Pruitt’s political causes,” The New York Times reported.

As for chemical safety, Trump’s proposed budget would eliminate a program allowing industry to digitally report the shipment of hazardous waste around the nation, which means EPA would be stuck tracking the movement of dangerous chemicals on paper.

Of course, budget cuts and loss of staff are nothing new to the EPA in recent years, even under Obama. Yet Enck emphasized that in spite of that, her EPA region was still able to bring strong cases against violators of environmental protections and successfully push for pollution reductions to save lives and protect public health.

“That did not interfere with our enforcement priority,” said Enck.

Here’s how the Trump administration’s EPA stacks up on enforcement in its first six months, compared with those of Barack Obama, George W. Bush, and Bill Clinton during the same time.

“We may be facing a time when EPA is no longer the environmental cop on the beat, just the way big polluters would like it,” said Enck. 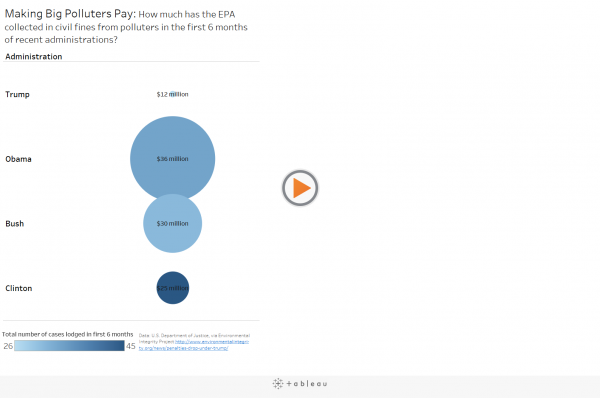 “We may be facing a time when EPA is no longer the environmental cop on the beat, just the way big polluters would like it,” said Enck.