The Wall Street Journal published a solid, well-researched article on how much various Federal financial regulators have levied in fines in the first half of 2017 versus the first half of 2016. The decline is so large, a full 2/3, that it demonstrates that the Trump business-friendly stance, and the large number of ex-Goldmanites on his team, is proving beneficial for large financial firms. 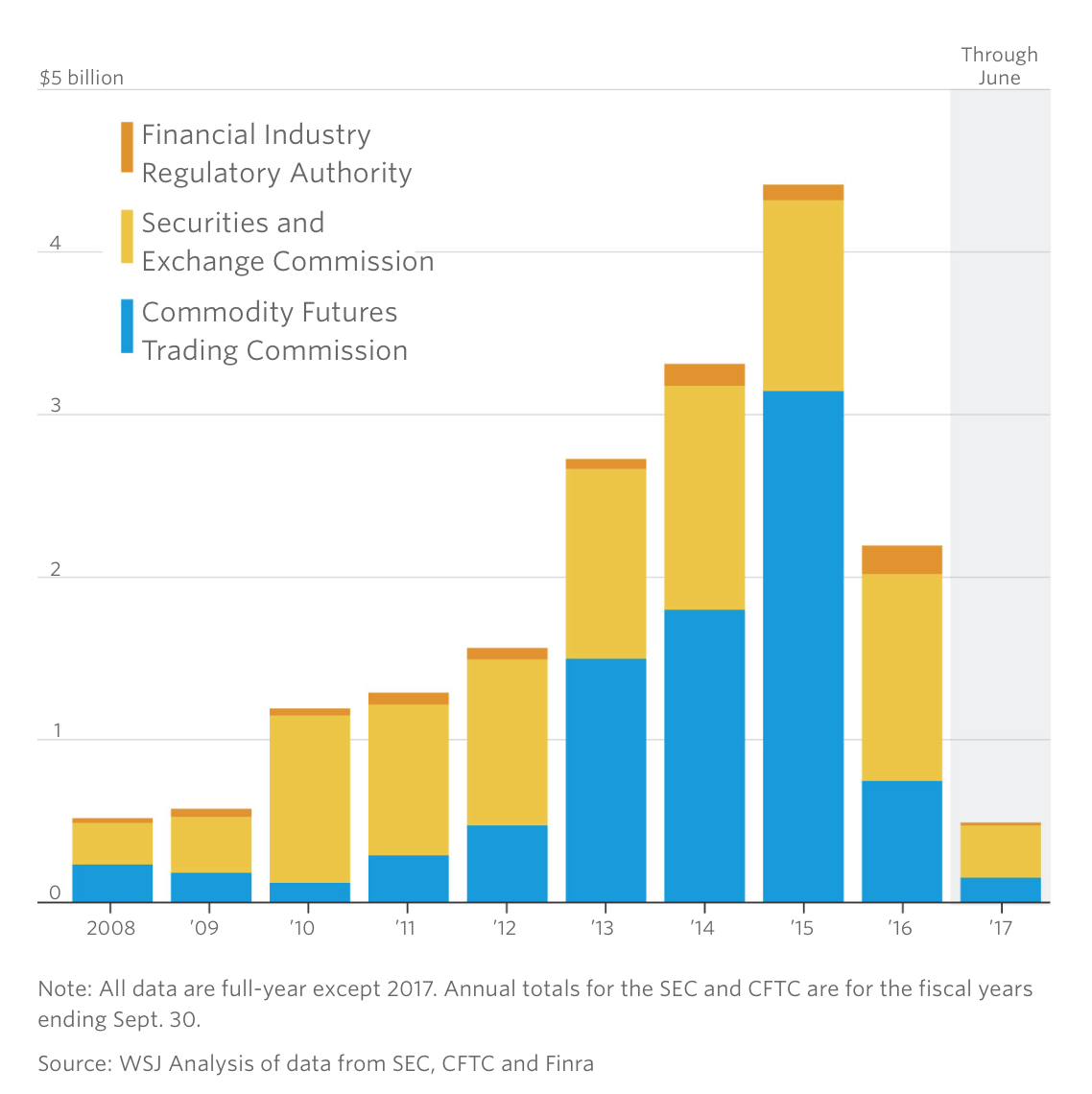 Admittedly, one would expect fines to be lower by the change of Administrations slowing things down a bit. Another factor in the year-to-year decline is that in what sure looked like an effort to burnish Obama’s record, a lot of outstanding crisis-related matters that had been moving slowly were finally wound up. But there were other late-in-Administration actions that were ginned up to get under the statute-of-limitations wire. The slowness to act would weaken any case the Feds could make. Litigators will tell you that delay weakens a plaintiff’s case since memories fade and records can legitimately be lost or have been discarded, even before getting to the more obvious problem that it makes “I’m the CEO and I can’t remember anything” defenses more credible.

Needless to say, various agency spokesfolks tried to say that the decline had nothing to do with more of a wink and nod attitude towards enforcement. With the SEC, one factor is policy change by new chairman Jay Clayton, that all he wants to pursue is folks like bucket shop operators, who are marginal both in terms of conduct and in terms of their absolute importance. Supposedly sophisticated investors who are ripped off by private equity firms and hedge funds have to fend for themselves, even though a group of state Treasurers and other prominent government officials who are also public pension fund trustees wrote the SEC asking for it to do more than the not-much it was doing under Mary Jo White. The Journal pointed out the SEC’s big fines in the first half of 2016 were settlements of alleged accounting abuses, an area White emphasized….and for which Clayton appears to have little to no interest.

Another impediment is that the SEC has only three of five commissioner seats filled. Michael Piwowar is almost rabidly pro-business and regulation hostile, so it’s not hard to imagine him barring enforcement actions from proceeding.

SEC Chairman Jay Clayton, who took over in May, has expressed concern about the size of corporate penalties the SEC has levied in recent years, saying they hurt shareholders and it would be better to punish guilty individuals.

That’s nice in theory but do you really expect Clayton to require a corporate executive to pay a massive fine, or force them to quit, as the far less well placed New York Department of Financial Services on-time chief, Benjamin Lawsky, has? Wake me when that happens.

And guess how much the routinely-missing-in-action Finra has done? Of course, financial firms believe Finra should do nothing because they pay for Finra, one of those perverse arrangements that never should have been allowed in the first place. So the easy-to-miss-if-you-blink level of enforcement Finra has engaged in has nevertheless gotten the goat of the likes of the Chamber of Commerce, which will never pass up an opportunity to complain about regulations, and Fidelity. And what are they caviling about?

The watchdog [Finra] imposed only two fines of more than $1 million in January through June this year and didn’t announce either.

In the first half of 2016, Finra imposed at least five fines of more than $1 million and publicly announced each of them.

To fill out the picture, the CFTC’s fines fell from $603 million to $153 million. One reason for the drop was the CFTC settled two big benchmark rigging cases last year and has no similar big-ticket items in 2017.

In a sign of a long-term shift in public sentiment, more than half the comments in the reliably pro-business Wall Street Journal were critical of going easy on banks. Apparently they have some appreciation of the true cost of the “heads I win, tails you lose” deal that big banks have engineered for themselves and think the banks need more, not less, oversight.

In a telling bit of synchronicity, the lead story at the Financial Times, US haul from credit crisis bank fines hits $150bn, paints the banks as victims. “Haul” implies the government is a thief making off with a bag of purloined goods in a sack over its shoulder, as opposed to an enforcer that did way too little.

Let us not forget that according to the back of the envelope calculation by the Bank of England’s Andrew Haldane, which years later was proven to be a sound estimate, the cost of the crisis was 1 x GDP. Real GDP in the US in 2007 was $15 trillion. So the banks have paid almost exactly 1% of the damage they did. And that’s before you get to the fact that most of these fines were tax deductible.

The pink paper has further larded up the cost to banks by using headline figures, like the supposes “$25 billion” paid in the biggest single item, the Federal/state mortgage settlement. As we and others pointed out at the time, the cash component was only a bit over $5 billion and the rest was in undertakings that were things that were things the banks wanted to do anyway, were actually imposing costs on third parties, or would cost them very little to do. The real economic cost of the non-dollar portion was about ten cents on the dollar. The same rule holds true for the non-cash portion of the other mortgage-related settlements. So even before you get to the tax writeoffs, you can knock about $40 billion off the FT’s $150 billion figure.

I’ve oft quoted a section from Haldane’s classic speech, The $100 Billion Question, because it can’t be repeated too often. From an older post:

More support comes from Andrew Haldane of the Bank of England, who in a March 2010 paper compared the banking industry to the auto industry, in that they both produced pollutants: for cars, exhaust fumes; for bank, systemic risk. While economists were claiming that the losses to the US government on various rescues would be $100 billion (ahem, must have left out Freddie and Fannie in that tally), it ignores the broader costs (unemployment, business failures, reduced government services, particularly at the state and municipal level). His calculation of the world wide costs:

Yves here. So a banking industry that creates global crises is negative value added from a societal standpoint. It is purely extractive. Even though we have described its activities as looting (as in paying themselves so much that they bankrupt the business), the wider consequences are vastly worse than in textbook looting.

One of the big reasons for Haldane estimating the total cost of banking crises and comparing them to the fines that would be required to pay for the damage is to determine how to apply economist Martin Weitzman’s framework for dealing with externalities, which is economist-speak for the damage that people who engage in commerce inflict on third parties. If the public cost is higher than the private benefit, the remedy is prohibition, as in banning certain activities or restricting them severely, as opposes to mere fines. The colossal damage done by financial crises says banks need to be put on a choke chain. Yet instead, not only is the approach clearly inadequate fines, but those fines are getting smaller.

One bit of good news is the reaction to the Financial Times article was dismissive to scathing. Representative comments:

When the people in whom society (yes, there is such a thing as society) has placed trust have proven themselves untrustworthy and when “the recovery” is only a way of getting more into the pockets of those people while everyone else faces “more austerity”, can it be any surprise that people are angry?

And the FT continues to rant and rage against “populism”.

$150 billion is less than a third of what the perps made in 2007 alone, not to mention all the years leading to the crisis.

That is hardly a disincentive to repeat such abuse (especially with zero jail time). These guys will sew the seeds of the next crisis if they haven’t already.

You may as well focus your reporting on that because this story is pathetic.

‘Haul’? What’s wrong with you!

Jail. Nothing else matters.

@/B Ok. Specifically what should someone go to jail for?

These reactions are yet another sign of an intensifying legitimacy crisis. Even the educated and presumably prosperous readers of the Wall Street Journal and the Financial Times aren’t buying the idea that banks and bankers were treated badly post crisis. Most of them accept the idea that lax regulation was the cause of the crisis and way too little in the way of punishment and reforms took place in its wake. The failure of the elites to discipline their own will only produce more political and social upheaval.