Yves here. Even though Ilargi is duly alarmed about Harvard Ken Rogoff continuing to pump for negative interest rates, the op-ed flow suggests this idea is losing favor among Serious Economists. It appears that at least the Fed recognizes that the experiment with super low interest rates hasn’t worked out as they thought it would. The undue eagerness of the Fed to “normalize,” as in raise rates even though the state of the economy isn’t anywhere near zippy enough to justify tightening, shows that the central bank wants headroom to be able to lower interest rates in a crisis. The Fed may also have noticed that negative interest rates haven’t induced consumers to spend, but instead appear to be interpreted by both businesses and individuals as deflationary expectations. In deflation, you want to hold cash and cash equivalents and defer spending since most things will be cheaper later. How economists could have persuaded themselves that negative interest rates would spur spending is beyond me.

The Fed may also have come to recognize that interest rate manipulation has asymmetrical effects: that it can choke off real economy activity but is lousy at stimulating it (the cliche is “pushing on a string”).

And since the folks at the Fed don’t generally get out in the heartlands, they may not have recognized that preppers (who are not all extreme right wingers, but there are big overlaps between the two groups) love cash and gold and are paranoid about the Fed. They have guns. Trying to deprive them of their cash would not be a hazard-free exercise.

Harvard professor and chess grandmaster Kenneth Rogoff has said some pretty out there stuff before, in his role as self-appointed crusader against cash, but apparently he’s not done yet. In fact, he might just be getting started. This time around he sounds like a crossover between George Orwell and Franz Kafka, with a serving of ‘theater of the absurd’ on top. Rogoff wants to give central banks total control over your lives. They must decide what you do with your money. First and foremost, they must make it impossible for you to save your money from their disastrous policies, so they are free to create more mayhem.

Negative interest rates will be needed in the next major recession or financial crisis, and central banks should do more to prepare the ground for such policies, according to leading economist Kenneth Rogoff. Quantitative easing is not as effective a tonic as cutting rates to below zero, he believes. Central banks around the world turned to money creation in the credit crunch to stimulate the economy when interest rates were already at rock bottom.

Central banks create recessions and crises. Not people, and not economies. Central banks. The next recession, which is inevitable, that’s the one thing Rogoff has right, will come when the bubbles in housing, stocks, bonds, etc., created by central banks’ QE, ZIRP, NIRP, start to pop. And there’s nothing worse than giving central banks even more tools for creating crises. We should take away the tools they have now, not hand them more sledgehammers.

In a new paper published in the Journal of Economic Perspectives the professor of economics at Harvard University argues that central banks should start preparing now to find ways to cut rates to below zero so they are not caught out when the next recession strikes. Traditionally economists have assumed that cutting rates into negative territory would risk pushing savers to take their money out of banks and stuff the cash – metaphorically or possibly literally – under their mattress. As electronic transfers become the standard way of paying for purchases, Mr Rogoff believes this is a diminishing risk.

Risk? What risk? The risk of people doing what their money what they choose to do, doing what they think is best? Of people trying to save their savings from being burned by central bank policies? What kind of mind comes up with this nonsense? Who is Ken Rogoff to think that he knows better what you should do with the money you worked for than you yourself do? You’d be a fool not to protect you hard-earned earnings from negative interest rates. Rogoff therefore seems intent on creating nations full of fools.

“It makes sense not to wait until the next financial crisis to develop plans and, in any event, it is time for economists to stop pretending that implementing effective negative rates is as difficult today as it seemed in Keynes time”, he said. The growth of electronic payment systems and the increasing marginalisation of cash in legal transactions creates a much smoother path to negative rate policy today than even two decades ago. Countries can scrap larger denomination notes to reduce the likelihood of cash being held in substantial quantities, he suggests. This is also a potentially practical idea because cash tends now to be used largely for only small transactions. Law enforcement officials may also back the idea to cut down on money laundering and tax evasion.

What makes sense is to not create crises. What does not make sense is negative interest rates. Ultra low interest rates have already destroyed trillions in savings and pensions, and now Rogoff effectively says central banks should take this a step further, and target whatever it is you have left. This is insane megalomania. It’s communism in its worst possible form. Oh, and it’s outright theft. Of a form that’s far more insidious and harmful than money laundering.

The key consequence from an economic point of view is that forcing savers to keep cash in an electronic format would make it easier to levy a negative interest rate. “With today’s ultra-low policy interest rates – inching up in the United States and still slightly negative in the eurozone and Japan – it is sobering to ask what major central banks will do should another major prolonged global recession come any time soon,” he said, noting that the Fed cut rates by an average of 5.5 percentage points in the nine recessions since the mid-1950s, something which is impossible at the current low rate of interest, unless negative rates become an option. That would be substantially better than trying to use QE or forward guidance as central bankers have attempted in recent years.

Forcing savers to keep cash in an electronic format would make it easier to steal it. Central banks could dictate that you lose 5% of your money every year. Or at least, that’s what they think. They want you to spend your money, and they got just the way to force you to do that. Or so they think. Well, go ask Abe and Kuroda how that’s worked out in Japan lately. What actually happens is that when you start stealing people’s money, savings etc., they become afraid of losing the rest too, so they start looking for ways to save their savings, not spend them.

In that sense, Rogoff’s suggestions amount to terror, to terrorizing people into doing things that go against their very survival instincts. What gets people to spend money is if they don’t feel terror, when they see their money and savings grow by a few percent per year. That is the exact opposite of what Rogoff wants to do. When people ‘sit’ on their savings, they do so for good reasons. What do you think has happened to Japan?

“Alternative monetary policy instruments such as forward guidance and quantitative easing offer some theoretical promise for addressing the zero bound,” he said, in the paper which is titled ‘Dealing with Monetary Paralysis at the Zero Bound’. “But these policies have now been deployed for some years – in the case of Japan, for more than two decades – and at least so far, they have not convincingly shown an ability to decisively overcome the problems posed by the zero bound.”

No wait, Rogoff is right second time: indeed “they have not convincingly shown an ability to decisively overcome the problems”. Because they’re terribly wrong. Theoretical promise? That’s all? But that means you’re just experimenting with people’s lives and wellbeing. Who gave you that right?

It’s high time, even if it’s very late in the game, to take political power away from central banks- and thereby from the banks that own them. There is nothing worse for our societies than letting these people decide what you can and cannot do with our money. Because as long as they have that power, they will seek to expand it. To prop up their member banks at your expense. And there is only one possible end result: you’ll be left with nothing. They want it all. 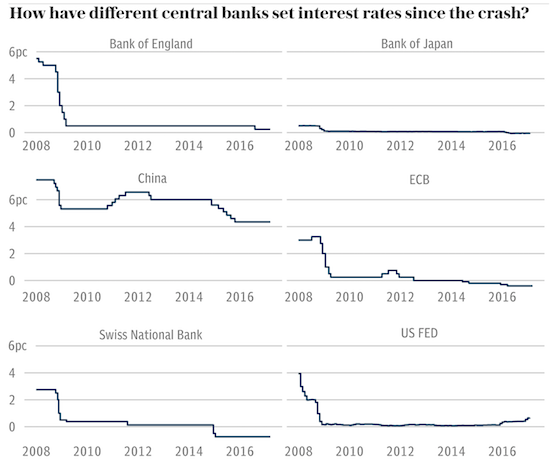