Some of you have been e-mailing me to make comments on specific posts. While I know most of you mean well, and some of these messages have been to praise particular articles or just provide general input and don’t seem to be looking for a reply, others have been to try to engage in a discussion or even argue with me personally, and a couple included personal attacks.

The reason for turning off comments was to stop the time and emotional cost of engaging with readers who use dishonest argumentation strategies, most of all personal attacks. Trying to get around that by writing me is not on. This is precisely the reason I turned off comments. It’s just as easy to blacklist offending parties by filtering their messages to trash as it was to blacklist them in the comments section. So if you test me on this, you will not come out the winner.

More generally: If you don’t like what we write, you should have the maturity to read other sites. The Internet is a big place.

I am making this point because I really would like to spend my time on readers who deserve it, but I already get over 700 e-mails a day. Management guru Michael Schrage wrote an article about how businesses need to fire 15% to 20% of their customers because they either have unrealistic service expectations, or want the enterprise to do things in a way it never said it would and doesn’t intend to. So getting pointed with the readers who really would be happier elsewhere is to allow us to better serve the ones who deserve our attention.

Earth Orbital Diagram xkcd EM: “Why isn’t there an eclipse every month?’ explained.”

Video: Watch the Whole Total Solar Eclipse in 4 Minutes Time. I’m told the best footage was from NASA in Wyoming, but I did a couple of searches on NASA’s site and couldn’t find it.

Here’s what to do if you miss Monday’s eclipse New York Post (Li). An even better one (in terms of how many big population centers are in its path, including NYC), in 2024!

Dealing with climate migration: ‘what matters are our actions’ The Ecologist (micael)

Gum disease sufferers 70% more likely to get dementia The Times. Keep in mind: correlation is not causation. Both may be symptoms of a third cause, like poor diet, long-term exposure to particular chemical agents, etc. The problem is this article advocates more tooth brushing as a remedy for gum disease when you can do a good job of taking care of your teeth and still have gum problems. My gums were fine per my dentist but I started doing oil pulling (using coconut oil, this article recommends sesame oil). I was astonished in a mere two days how much firmer and tighter my gums got to my teeth. So if you have the patience, I would give it a shot, but do not cut back on toothbrushing! If you don’t have the time or don’t like experimenting with folk remedies, there are antibiotic mouthwashes that only take a minute a day (chlorhexidine gluconate, brand name Peridex) but you need a scrip and dentists aren’t keen about patients using it all the time because it discolors teeth with long-term use.

Does the world need polymaths? BBC. IMHO, yes. I’ve seen way too many experts who are dangerously blinkered. Economists, who overwhelmingly refuse to learn from other social sciences, are prime examples. Being cross disciplinary is very valuable, even if you don’t rise to the level of expert in your secondary fields of interest.

US pushes ahead with provocative war games in South Korea WSWS. This has been going on for a long time and is not reported in the Western press.

“We Burned Down Every Town in North Korea” Counterpunch

Distortions & Missing The Point (feat. The Washington Post, The Hill, Sam Biddle & Matt Tait) g-2.space (UserFriendly). More on The Nation piece debunking the DNC “hack” story and the not-very-convincing efforts to discredit it.

Lithuania challenges Russia with a shipment of U.S. natural gas Axios. Reslic; “Our subsidies too.”

Trump Offers Open-Ended U.S. Commitment to Shore Up Afghanistan Bloomberg. More proof that Trump is now a hostage of the power players that are left.

iPhone 8 3D face recognition system will be faster than current tech, to work in ‘millionths of a second’ PhoneArena. I am at a loss to understand how users can see having biometrics in their phones as a good feature, particularly since Apple also pushes users to synch their devices to iCloud.

Don’t pin your hopes on military generals saving the world from Trump Guardian. Resilc: “Trump is a figurehead, the junta is in control.”

Trump’s Base Goes Ballistic Over His ‘Unlimited War’ Daily Beast (resilc). What matters is what they do with the anger. If they just fulminate on the Internet, it won’t change anything.

How Big Is The Bannon Wing Of The Republican Party? FiveThirtyEight (UserFriendly)

The Trumps Have Maxed Out the Secret Service’s Budget Vice

Secret Service says it will run out of money to protect Trump and his family Sept. 30 Washington Post (furzy)

…the indictment is an exercise in omission. No mention of the Awan group’s theft of information from Congress. Not a hint about the astronomical sums the family was paid, much of it for no-show “work.” Not a word about Wasserman Schultz’s keeping Awan on the payroll for six months during which (a) he was known to be under investigation, (b) his wife was known to have fled to Pakistan, and (c) he was not credentialed to do the IT work for which he had been hired. Nothing about Wasserman Schultz’s energetic efforts to prevent investigators from examining Awan’s laptop. A likely currency-transportation offense against Alvi goes uncharged. And, as for the offenses that are charged, prosecutors plead them in a manner that avoids any reference to what should be their best evidence. There is something very strange going on here.

Problems with the infrastructure bill are twofold: One, it required something like $10 bil in side goodies to get enough votes for passage. Second, voters have been fooled on numerous occasions when bond money for “infrastructure” or transportation improvements have ended up in the general fund and then lateraled over to back-fill pension gaps.

Dems are desperate to stop this recall but they got smacked down by the courts once already for trying to lift caps on how much other legislators can contribute to Norman’s recall defense. They are also trying to stall the election date, push it off to a regular election rather than call a special one. Don’t know how that battle has gone.

The Next Fed Chair Won’t Really Control the Fed Bloomberg

Ray Dalio: US most divided socially and economically since 1937 CNBC (UserFriendly)

Fed’s Big Bond Unwind May Clobber U.S. Stocks, Corporate Debt Bloomberg (UseFriendly). This is politically motivated since conservatives don’t like the Fed having a huge balance sheet. But the central bank could just let it run off. It would take a long time but why is there any rush?

He’s married upscale trash. Anyone who brags about brand names has no class.

Book Review: The Spirit Level Ian Welsh (martha r). We’ve mentioned this book repeatedly and featured one of its key analyses repeatedly. But it needs to get even more notice.

Fear the rise of info-monopolies over America Fabius Maximus

Capital at 150: History in Capital and Capital in History Defend Democracy

The New Science of Sex and Gender Scientific American. The overview to an issue on this topic. Some articles:

3. When Sex and Gender Collide

13. The Woman Who Saved the Planet

And also this: Harassment and Sexism in Science—the E-Mail Diaries

Antidote du jour: Paco the Eclipsed Cat (SV). Lambert: “Many have commented on the half-moon shapes thrown by the eclipse.” 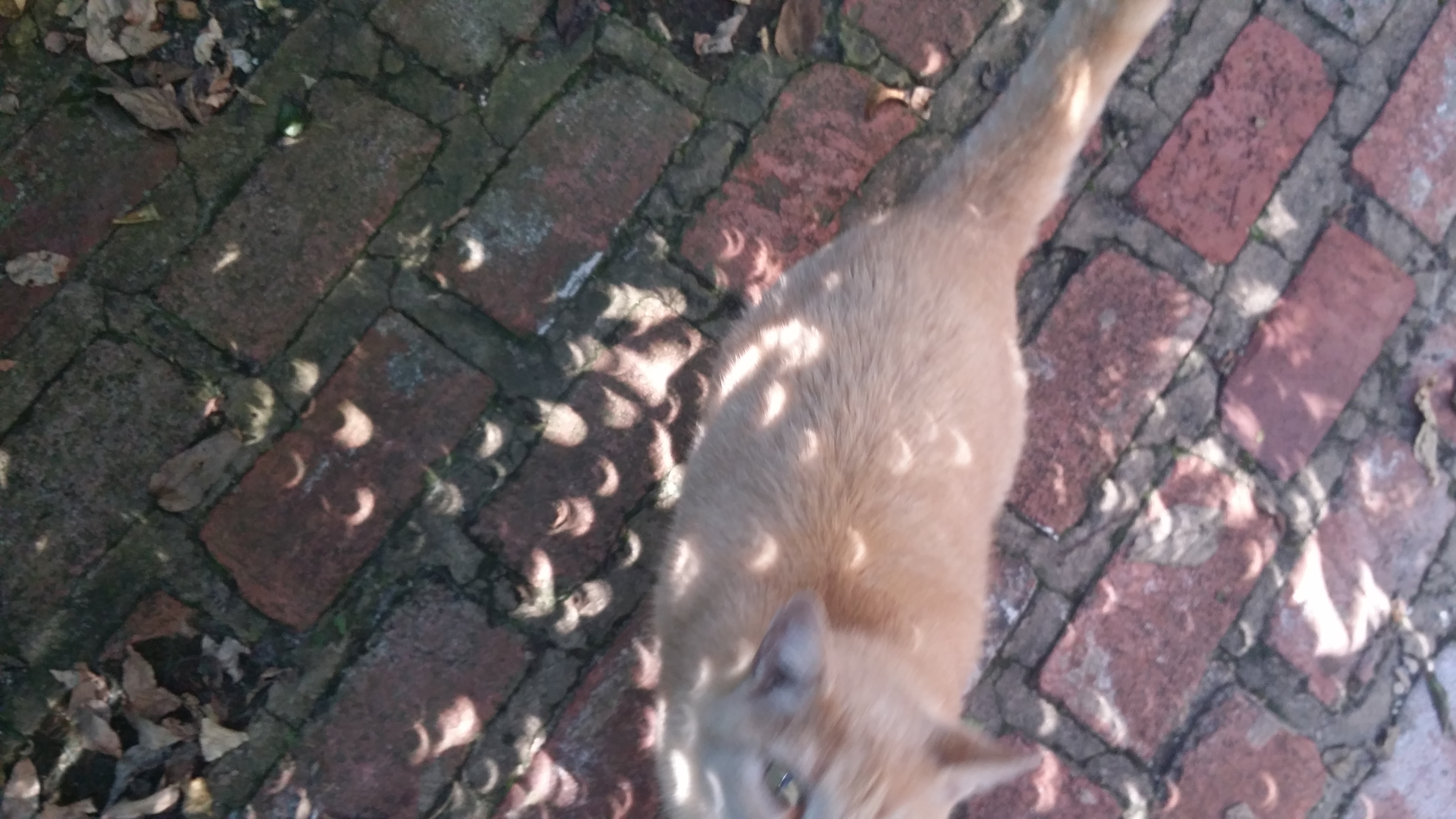