When Birds Flock Around a Sphere, Beautiful Things Happen The Wire

What Football Crisis? In Alabama, the Game’s Hold Only Gets Stronger WSJ

Sea salt around the world is contaminated by plastic, studies show Guardian

Can China and Russia work together to defuse Korean peninsula’s nuclear crisis? SCMP

Going cash-free: why China is light years ahead in the online-payment revolution SCMP

Why Beijing’s plan to stop producing petrol and diesel cars could be a game-changer for the industry? SCMP

Why is India’s Soft Power Still Untapped? The Wire

‘Is raid raj now unavoidable?’: Ten reads from Left and Right on the costs of demonetisation Scroll.in

KILL ALL, BURN ALL: THE JAPANESE WAR TACTIC USED ON THE ROHINGYA BY MYANMAR’S MILITARY SCMP

The West might hardly believe it, but it now seems the Syrian war is ending – and Assad is the victor Independent. Robert Fisk.

Pakistan, Polio and the CIA LRB

Trump’s Approval Rating Is Up A Tick FiveThirtyEight

WATCH WHAT TRUMP DOES, NOT WHAT HE SAYS. HE MAY NOT ACTUALLY END DACA Intercept

“We started it”: Atul Gawande on doctors’ role in the opioid epidemic Vox

TURN ON, TUNE IN, DROP BY THE OFFICE 1843 Magazine

Jamie Dimon ventures beyond Wall Street to have a say in Washington Reuters. Don’t tell me he’s testing the waters too.

Sarbanes-Oxley, Bemoaned as a Burden, Is an Investor’s Ally NYT. Gretchen Morgenson.

The Most Deadly Atlantic Hurricanes Of The Last 50 Years vs. Irma International Business Times

Hurricanes Irma, Harvey to cast pall over U.S. economy for months and even years MarketWatch

Hurricane Irma: Rich can sit pretty while poor wait and pray Irish Times (martha r). Despite the warnings, the poor may not be able to flee….

I’ve seen the reality of what happens after disasters like Hurricane Irma – it’s different to what you’ve been told. Independent. Patrick Cockburn. The deck: Because of an over-focus on empty gestures and a queasiness about money, the response to natural disasters in the US is all too often inadequate. The army and the National Guard are on standby in South Florida – but if Hurricane Andrew taught us anything, it’s that they aren’t as much use as you’d think

Houston City Councilman Dave Martin, who represents hard-hit Kingwood, had a message for the public about the American Red Cross.

“I beg you not to send them a penny,” he said at Wednesday’s council meeting. “They are the most inept unorganized organization I’ve ever experienced.”

A Requiem for Florida, the Paradise That Should Never Have Been Politico

And, reader BC writes:

If you have been following the adjustments to the predicted track of Hurricane Irma, you will know that it’s predicted track has shifted substantially westward. Several days ago, it appeared to be headed straight towards Miami. Many predictions had variances along a more eastward trajectory. If you are a ship at sea, these predictions are often the the basis of bets you place your life on.

Over the past days and hours, I have been monitoring how sea traffic and air traffic have changed due to Hurricane Irma. For sea traffic there is an app called MarineTraffic that collects the transponder beacons of all large ships globally. The change in Irma’s track seems to have horrifying ramifications for three cruise ships that all had been in the Miami path of the storm and chose to steam at full speed to the west. Using the app you can also verify the paths of each. There are three cruise ships that are in great danger from Irma seen below (in blue) in a capture made at 7pm Eastern time.

God speed and prayers to all souls onboard.

Jerri-Lynn here: The three ships are: Enchantment of the Seas, Grand Celebration, and Majesty of the Seas. 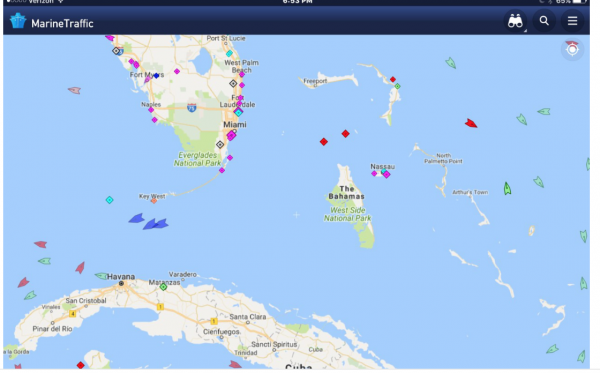 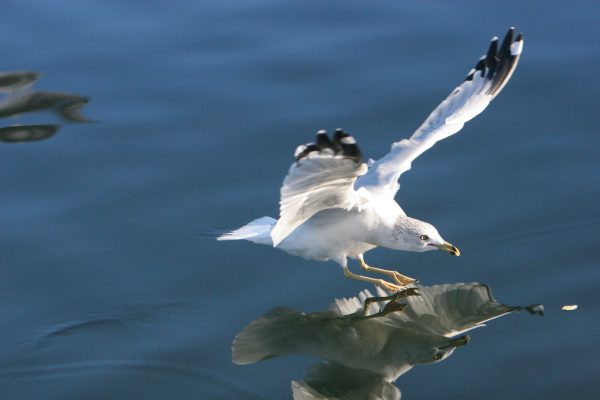