This is Naked Capitalism fundraising week. 1098 donors have already invested in our efforts to combat corruption and predatory conduct, particularly in the financial realm. Please join us and participate via our donation page, which shows how to give via check, credit card, debit card, or PayPal. Read about why we’re doing this fundraiser, what we’ve accomplished in the last year and our current goal, burnout prevention.

Lambert here: When health insurance actually translates to health care, lives are saved. Mirabile dictu! Wouldn’t it be great if the United States in 2017 could do what Germany did in 1884?

Many developing countries are experimenting with compulsory health insurance models (Lagomarsino et al. 2012, Miller et al. 2013). Although large informal sectors make these schemes hard to organise, they decrease out-of-pocket spending by extending access to health services and preventive services. This is important in places with high prevalence of infectious diseases such as HIV, malaria, and tuberculosis. In the US, Medicare for the elderly and Medicaid for the poor have extended coverage to subgroups of the population. These programmes resulted in significant improvements in healthcare utilisation and health outcomes (Card et al. 2008 and 2009, Currie and Gruber, 1996, Finkelstein 2007, Finkelstein and McKnight 2008, Goodman-Bacon 2017). While we await more comprehensive evaluations of the 2010 US Affordable Care Act (known as ‘Obamacare’), we can learn from earlier large-scale implementations of universal healthcare schemes.

In December 1884, Otto von Bismarck, Chancellor of the German Empire, introduced the first large-scale compulsory insurance to establish universal healthcare. For the first time in history, all blue-collar workers were covered by an insurance that provided paid sick leave and unrestricted access to doctors and medical treatment.

Bismarck’s original intentions were not genuinely social. His health insurance was a reluctant reaction to upheavals among the working class in the wake of the Industrial Revolution, and a way to secure a political advantage against the Socialist Worker’s Party in the Reichstag, Germany’s parliament. Bismarck’s clever design ensured that the imperial budget was not affected. It was jointly financed by employers (one third) and employees (two thirds).

In recent work, we investigate the impact of Bismarck’s health insurance on mortality (Bauernschuster et al. 2017). We build our main analysis on administrative mortality data from Prussian districts between 1875 and 1905. Prussia was two-thirds of the German Empire, and had a statistical office that collected and reported data on mortality by occupational group. Combined with the imperial occupation and population censuses, this lets us calculate occupation-specific mortality rates at the district level. When insurance was introduced in 1884, it was compulsory only for blue-collar workers (our treatment group). Access to healthcare was unchanged for other occupational groups such as public servants (our control group). Comparing mortality rates across both groups before and after 1884, we identify the impact of Bismarck’s health insurance on mortality (Figure 1). 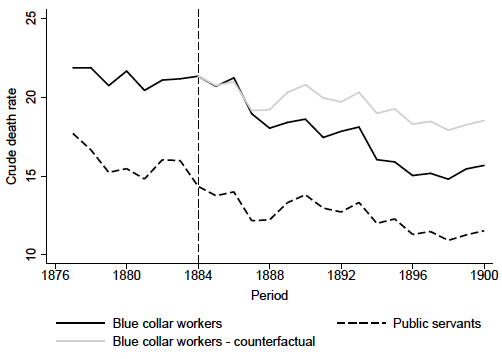 Notes: The figure shows the number of deaths per 1,000 people by sectoral groups of blue-collar workers and public servants. Using difference-in-difference, the counterfactual is computed by parallel-shifting the trend of the public servants up to the blue-collar workers level in 1884. The vertical dashed line indicates the introduction of Bismarck’s health insurance in 1884.

A generalised difference-in-difference method suggests that Bismarck’s health insurance reduced blue-collar worker mortality. Blue-collar workers and public servants followed very similar mortality trends prior to the introduction of compulsory health insurance. Soon after 1884, mortality rates for blue-collar workers declined much faster than the mortality rates for public servants. By the end of the 19th century, the reduction was almost 9%. Much of this decline was driven by the children of the insured, indicating significant within-family spillovers to uninsured family members.

The effect of Bismarck’s health insurance on mortality turns out to be very robust. Sanitation infrastructure such as sewerage systems and waterworks improved around this time, and urbanisation tendencies or improved working conditions for blue-collar workers could also confound the effects, but we rule them out. We are also able to show that healthier individuals were not taking blue-collar jobs.

To gain a deeper understanding, we look at data on the causes of death in Prussia. They imply that the decline in airborne infectious diseases mortality was driven by a decline in communicable airborne diseases, in particular tuberculosis. They were the main causes of death at that time, a situation similar to many developing countries today. Medical treatment was, nevertheless. limited. Antibiotics would not be widely used until the 1940s and many important vaccines were not available, and so the significant reduction of infectious disease mortality in the blue-collar population is surprising to see.

Results based on data from aggregate sickness-fund balance sheets suggest that the mortality reduction is primarily associated with expenditures for doctor visits and medical treatment, but not with sick pay. Bismarck’s health insurance probably achieved improvements in health outcomes because it provided low-income households with unlimited access to doctors that they were formerly unwilling or unable to consult. Poor worker families gained access to the newly emerging medical knowledge on the transmission of communicable diseases, the fundamental role of hygiene for preventing infections, and health procedures that became available at the end of the 19th century.

This research helps establish the causes of the mortality decline during the historical demographic transition at the turn of the 20th century. Proponents of the nutrition view (McKeown, 1979, Fogel 2004) have argued that changes in income and standard of living most important, whereas proponents of the public health view (Deaton 2013, Preston 1975, Cutler and Miller 2005) argued that directed investments in public health infrastructure, and the application of public health knowledge, as driving forces.

Paid sick leave may have reduced financial risk, stabilised nutritional intake and thus improved the health status of insured in the long run, but the immediate benefits of Bismarck’s health insurance worked largely through the prevention of infectious diseases. The diffusion of hygiene knowledge to the working class was probably crucial at a time when treatment by medication was still limited. We can even argue that compulsory health insurance that focused on disease prevention through hygiene education would have been more cost-efficient. On the other hand, Bismarck also desired social peace, and this form of heal insurance may not have promoted this political objective.