The story as it is told is “Iowa’s Healthcare Market has imploded. Companies have gone out of business, lost money, premiums increased, policies canceled, etc. “ With Obamacare’s fifth open-enrollment season kicking off on Nov. 1, the consequences are playing out across one of America’s most politically influential states as residents struggle to maintain coverage.” It has been difficult to implement the ACA with the issues with the healthcare exchanges, Republicans badmouthing the ACA, and its first attempt at a US healthcare policy. Just one insurer is willing to sell policies in 2018. Why did it end up this way and what caused it?

Gov. Kim Reynolds: “Obamacare is unaffordable, unsustainable and unworkable and Obamacare has driven out consumer choice and competition.”

Trump: “Obamacare is finished. It’s dead. It’s gone. There is no such thing as Obamacare anymore.”

Vanessa Beauregard a resident of Iowa: “I cannot believe our politicians and government have put us in this situation. It’s just not right when you’re not a deadbeat.”

Dave Anderson, a health insurance expert at Duke University. “It’s hard to build inexpensive networks when the only hospital within 30 miles has you over a barrel.”

Aaron Todd, chief strategy officer for the Iowa Primary Care Association.: “There wasn’t a political will to make hard decisions or move people. They basically saw [keeping the noncompliant plans] as a relief valve.”

Nick Gerhart, who authorized the noncompliant plans to remain in the market as the state’s insurance commissioner. : “Why would I stand in the way of people keeping their insurance? It was a viable option. What does it look like if they’re in? The [premium] increases still would have been significant.” Disagreeing with these being a destabilizing factor.

Here is the story as I know it, a half commitment to the ACA with a lot of resistance from Republicans.

CoOportunity turned out to be the canary in the co-op coal mine. In the ensuing three years, 19 of the 23 nonprofit startup plans across the country, seeded with more than $2 billion in loans, collapsed after piling up huge financial losses. Gerhart, a Republican appointee, blames the disastrous performance in part to a lack of effective oversight from federal officials at the Center for Medicare & Medicaid Services.

Effectively you’re running a venture capital firm out of CMS with nobody who understands insurance.

After three years on the sidelines, Wellmark finally entered Iowa’s exchange this year. It did not go well. Company officials attributed its troubles in part to a single patient who was costing the company $1 million a month in claims. A company executive revealed in a speech to the Des Moines Rotary Club earlier this year that the customer in question was a 17-year-old boy with hemophilia.

– Compensate insurance companies for losses whether nonprofit or for profit.

– To cover those instances when an insurance company would end up with one, two, or a few of the $1 million dollar insured a company had to cover, could not deny for pre-existing conditions, or cancel due to illness or disorder (which by-the-way still exists in Advantage programs).

Depicting the Risk Corridor particulars rather than attempting to explain it in writing will give a better explanation. Click here to better read the chart. Please note the plus or minus 3% and then the different ratios of revenue sharing or funding from and to healthcare companies and Co-ops. 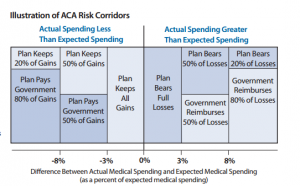 So what happened? The Risk Corridor program works well for Part D, brings in revenue for the government, and is still in place. February 2014 found Rubio testifying to the House Committee on Oversight and Government Reform on behalf of his bill. At the same time the CBO released their evaluation of the Risk Corridor program. Instead of being detrimental and a fiscal drag, the CBO projected the federal government would collect $8 to 16 billion from health insurers. Premiums would outpace claims, $8 billion would be distributed to the plans losing money, and $8 billion in additional revenue would be left for the federal government. Another House probe suggested initially there would be a shortfall with claims exceeding premiums.

The Republicans were not sitting idle and were investigating ways to derail the PPACA. As the ranking member of the Budget Committee, Senator Jeff Sessions and the chairman of the House Energy and Commerce Committee, Rep. Fred Upton came up with a plan to attack the legality of the Risk Corridor payments. They joined forces with the Appropriations Panel Chairman Rep. Jack Kingston whose panel funds the Department of Health and Human Services and the Labor Department. Kind of get the picture so far?

Questioning whether the Risk Corridor payments were being appropriated correctly, the Appropriations Panel forced the HHS to make changes in how they appropriated funds allowing Congress to stop all appropriations. The PPACA could no longer appropriate the funds as they were subject to the discretion of Congress. The GAO issued an opinion on the legality of what the HHS was doing with funds.

Sec. 227. None of the funds made available by this Act from the Federal Hospital Insurance Trust Fund or the Federal Supplemental Medical Insurance Trust Fund, or transferred from other accounts funded by this Act to the “Centers for Medicare and Medicaid Services–Program Management” account, may be used for payments under section 1342(b)(1) of Public Law 111-148 (relating to risk corridors).

This action blocked the HHS from obtaining any of the necessary Risk Corridor funds from any other Congressional appropriated program funds.

Nothing was said by Senator Sessions, Representatives Upton or Kingston before passage on what they had managed to do. It was Senator Rubio who issued a news release saying the provision was appropriate even though he had little to do with it. In the end, Colorado Rep. Jack Kingston’s one sentence purposely created a $2.5 billion shortfall in the Risk-Corridor program in 2015 as the HHS had collected $362 million in fees. Insurers who had misjudged the market sought nearly $2.9 billion in payments, many nonprofit insurance Co-ops failed, healthcare insurance companies began to raise premiums to compensate, and some healthcare insurance companies recognizing an untenable environment created by Republicans took their losses and left the market.

If you wish to know why there are few insurance companies and no Coops issuing healthcare policies on the exchanges, the policies are arbitrarily expensive by default, and companies are leaving or going bankrupt, etc. Ask your Republican Senators and Representatives why they sabotaged the Risk Corridor Program.