Last week, we discussed what appeared to be the most egregious case of the health care revolving door seen so far.  A health care corporate lobbyist without any direct medical, health care, public health or biomedical science experience was named Acting US Secretary of Health and Human Services after being confirmed as Deputy Secretary.

Only a week later, an even more egregious case may be in the works.  The name being “floated” as nominee to be the next Secretary of Health and Human Services is Mr Alex Azar, who through this year was a top pharmaceutical executive.  Again, he has no experience in medicine, the health professions, public health or biomedical sciences.

To repeat, you cannot make this stuff up.

Azar has spent most of the past decade inside the drug industry, one of the key sectors he’ll regulate at HHS. Azar joined pharmaceutical giant Eli Lilly and Company in June 2007 as a senior vice president of corporate affairs and communications right after leaving the Bush administration.

He rose to head Lilly’s U.S. operations in 2012, a position he held until this January, when he left the company. At Lilly he worked on both international and federal government affairs and public policy. Other areas of focus included counterfeit medicines and health information technology.

As part of his role at Lilly, Azar served on the board of directors for BIO, a drug lobby.

Mr Azar did have prior experience in the Department of Health and Human Services, but essentially as a lawyer/ administrator,

He served as the department’s general counsel and deputy secretary during the Bush administration.

To emphasize his lack of medical, health care, public health or biomedical science background, see this quote from what Mr Azar wrote this in his alumni profile for the Yale Law School,

I entered healthcare largely by accident. After law school, I clerked for Justice Antonin Scalia and then joined a D.C. law firm. I went to work for my mentor Ken Starr immediately after he became the Whitewater independent counsel.

While at my law firm, Wiley, Rein & Fielding, I was active in the Bush-Cheney campaign in 2000. After Bush won, I received a call from the office of Tommy Thompson, Secretary of the Department of Health & Human Services, asking me if I’d have interest in being General Counsel of HHS. I’ll confess that I wrestled with the question, since I had not focused on health law in my legal career.

The Politico article suggests that the Trump regime might consider most of Mr Azar’s credentials to be the top US health official are political,

He has also been a harsh critic of Obamacare and cheered GOP efforts to repeal and replace it, telling Fox Business in May that the Obamacare is ‘fundamentally broken’ and ‘circling the drain.’

Azar emerged as a strong backer of former Florida Gov. Jeb Bush’s Republican presidential campaign in 2016, serving on Bush’s 30-member Indiana steering committee in the lead-up to the election.

Azar knows Vice President Mike Pence from his time at Lilly, which is headquartered in Indianapolis.

Note that were he to become Secretary of DHHS, unless the Affordable Care Act (“Obamacare”) were to be repealed, he would be charged with enforcing it.

And years prior to that, according to the Washington Post,

Unlike the Mr Hargan, who transited the revolving door from a lobbying position, Mr Azar had direct operational responsibility, in this case, for Eli Lilly’s US operations.  Thus he ought to be held responsible for the company’s ethical misadventures during the time he was there.  In fact, the company has had a few such misadventures, some of which we have previously discussed.

We discussed this in 2014.  This case seemed to involve serious deceptions, since the judge said in one ruling:

the evidence during the trial showed that the companies ‘disregarded, denied, obfuscated and concealed’ for more than a decade that Actos could increase patients’ risk for bladder cancer.

At the time, this was considered a landmark case.  Eli Lilly pleaded guilty to a misdemeanor criminal charges and settled allegations about questionable marketing practices for its anti-psychotic drug Zyprexa for over $1 billion in 2009 (see post here).  The settlement provided some instructive information about how big pharmaceutical companies employ ghost writing to sell product (see this post). The company pushed Zyprexa for elderly patients with dementia, despite the lack of evidence that the drug’s benefits outweighed its clear harms, thus likely leading to patient harm.

Many other cases of dubious Lilly practices that did not necessarily lead to legal settlements or criminal charges can be found here.  These practices include older, lesser cases involving the revolving door; and various instances of apparently deceptive marketing practices such as planned obsolescence of drugs, use of physician “thought leaders” as covert drug marketers, payments to patient advocacy groups presumably to encourage them to act also as covert drug marketers, etc, etc

Furthermore, the company was involved in several major cases of misbehavior overseas about which  Mr Azar may or may not have been aware.  These included:

Per the Wall Street Journal, the government deemed the company to have engaged in anti-competitive behavior.

We discussed this here.  This case seemed serious since it involved lavish gifts and payments made from 2006-2009 to Chinese physicians who worked for the government , bribes to health officials to Brazil starting in 2007, and other such transactions in other countries in previous years.

Last week we noted that Mr Trump famously promised to “drain the swamp” in Washington.  Last week, despite his previous pledges to not appoint lobbyists to powerful positions, he appointed a lobbyist to be acting DHHS Secretary.  This week he is apparently strongly considering Mr Alex Azar, a pharmaceutical executive to be permanent DHHS Secretary, even though the FDA, part of DHHS, has direct regulatory authority over the pharmaceutical industry, and many other DHHS policies strongly affect the pharmaceutical industry.  (By the way, Mr Azar was also in charge of one lobbying effort.)

So should Mr Azar be confirmed as Secretary of DHHS, the fox guarding the hen house appears to be a reasonable analogy.

Moreover, several serious legal cases involving bad behavior by his company, and multiple other instances of apparently unethical behavior occurred on Mr Azar’s watch at Eli Lilly.  So the fox might be not the most reputable member of the species.

The ongoing parade of people transiting the revolving door from industry to the Trump administration once again suggests how the revolving door may enable certain of those with private vested interests to have excess influence, way beyond that of ordinary citizens, on how the government works, and that the country is still increasingly being run by a cozy group of insiders with ties to both government and industry. This has been termed crony capitalism. The latest cohort and now this most flagrant example of revolving door transits suggests that regulatory capture is likely to become much worse in the near future.

So, as we have said before [before, before…] The continuing egregiousness of the revolving door in health care shows how health care leadership can play mutually beneficial games, regardless of the their effects on patients’ and the public’s health.  Once again, true health care reform would cut the ties between government and corporate leaders and their cronies that have lead to government of, for and by corporate executives rather than the people at large. 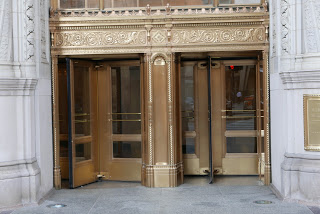