Many societies in the developed world have been shifting away from cash towards electronic alternatives. Despite this, there has been a remarkable increase in currency holdings over the past decade. This column looks at the evolution of cash holdings over time to shed light on this apparent contradiction. While circulating currency over GDP has been declining since WWII, there have been sizable increases in recent decades which are only partially explained by low interest rates.

If we were to believe technology cheerleaders, cash is about to disappear. It has already almost done so in Sweden (Skingsley 2017) and thanks to both new hardware (mobile phones and near-field communication) and software (internet, instant payment systems), it will disappear everywhere else soon.

Appealing as it might be, however, this story does not match with the empirical evidence. Goodhart and Ashworth (2014) noted a “remarkable” increase in the ratio of currency to GDP in the UK from 13.3% in 2007 to 16.1% in 2014. In the US and the Eurozone, people not only hold sizeable amounts of physical cash – in 2016 per capita holdings were around $4,200  and €3,400, respectively – but, even more puzzling, cash holdings relative to nominal GDP have increased in recent years (Figure 1, left panel). 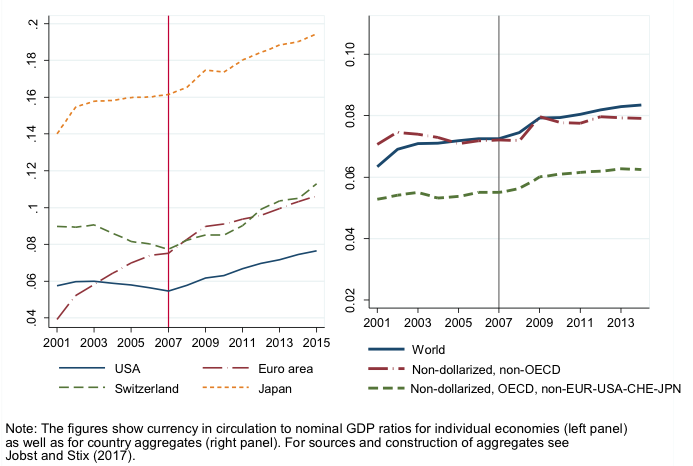 Attempts to explain this apparent paradox typically consider currency-specific factors. US dollars, euros, and Swiss francs are commonly used and hoarded abroad (Bartzsch et al. 2013, Judson 2017, Assenmacher et al. 2017), so increasing circulation might reflect foreign demand. In the case of sterling, which is not an international currency, Goodhart and Ashworth (2014, 2017) attribute the increasing use of cash after 2007 to a thriving shadow economy.

The Increase in Cash Demand is a Widespread Phenomenon

As we show in a recent paper, the increase in cash demand is not restricted to a handful of currencies but is a broader phenomenon (Jobst and Stix 2017). We collected data on currency circulation for a sample of economies covering 96% of world GDP from 2001 until 2014. Three stylised facts stand out:

Figure 2 Changes in currency in circulation over nominal GDP ratios, 2004 to 2014 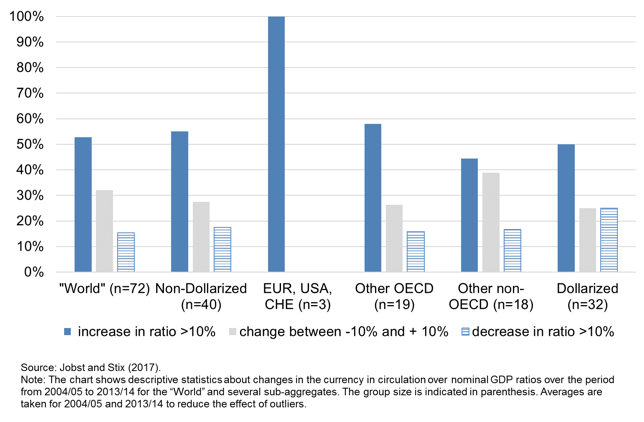 Both the magnitude of cash circulation and its increase over the past decade raise crucial questions for central banks and policymakers. What explains the puzzling size of cash circulation? Can the increase over time be explained by conventional economic forces (e.g. lower interest rates), or are there alternative explanations? What does the apparent demand for cash imply for considerations to phase out or to restrict the use of cash?

How Big is Big? The Recent Increase in Cash Demand is Large in a Long-Run Perspective

To put the recent development in cash demand into perspective, we looked at the evolution of cash circulation over the past 150 years for a sample of five countries for which such data are available, plus the Eurozone.2 The following main observations stand out: 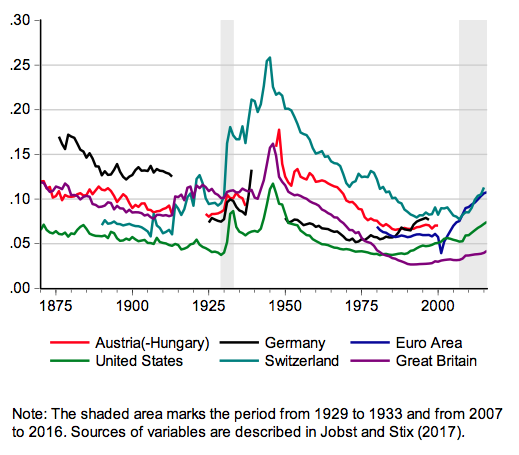 Several arguments could rationalise the recent increase in cash demand: low interest rates, an increase in shadow economic and/or criminal activities, and low confidence in banks or increased uncertainty that bolster the role of cash as a safe (haven) asset.

To analyse the relative importance of these factors, we estimated a panel money demand model for the period from 2001 to 2014. We focus on domestic demand factors and therefore disregard all currencies which are internationally demanded. Estimated income and interest rate elasticities – the two standard determinants in money demand functions – are within plausible ranges. But we also include year fixed effects, which measure any average change (across economies) that cannot be explained by these conventional economic forces. These year fixed effects are close to zero before 2007, but positive and increasing thereafter. Low interest rates after 2007/08 can thus account for some part of the increase in cash demand; however, there seems to be a shift in cash demand after 2007 that remains unexplained.

What Can Explain the Shift in Currency Demand after 2007?

Keeping in mind that these findings are only indicative as unobserved variables might be correlated with this grouping, we conjecture that reports of banking problems in some countries might have affected sentiment everywhere. This could have led to a situation in which bank deposits and cash were no longer seen as perfect substitutes (which does not necessarily entail a sudden or strong shift in deposit to currency ratios as would be typical for banking crises). Or, in the words of Friedman and Schwartz (1963: 673): “The more uncertain the future, the greater the value of [the] flexibility [of cash] and hence the greater the demand for money is likely to be”.

In order to explain the observed pattern in cash demand, however, the argument requires a rather persistent increase in uncertainty going well beyond the short-term shock in 2007/08, for which evidence is also difficult to come by. News-based indices (Baker et al. 2016) indicate that economic policy uncertainty increased substantially in 2008 and remained at elevated levels, at least in Europe. In this respect, it is interesting to look back in history once more. Figure 4 shows the evolution of currency in circulation over nominal GDP for a range of countries during the 1920s and 1930s, a period characterised by banking crises and significant economic uncertainty.[vi] To be sure, in some of the most affected countries like the US, the currency ratio increased in the 1930s much more than after 2008. What is striking, however, is the persistence of the increases well after the banking crises had been overcome or deposit insurance was instituted, as in the US in 1933.

Figure 4 Increase in currency circulation around financial crises, 2008 versus 1930s 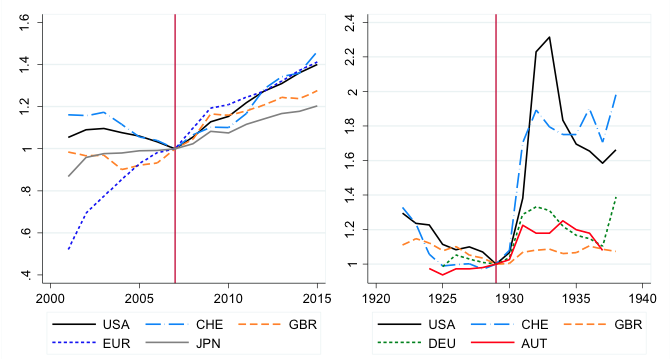 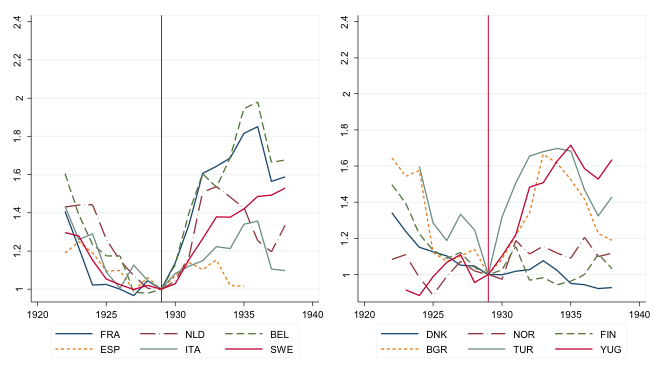 Note: The figure shows the temporal evolution of the CiC over nom. GDP ratio for the Great Recession (upper left panel) and the Great Depression (remaining panels). The ratios are indexed to one in 2007 and 1927. For sources, see Jobst and Stix (2017).

We Need a Better Understanding of Non-Transaction Cash Demand

Cash use for transactions most likely will decline. But cash balances for transactions comprise only a modest share of overall cash demand (a rough estimate of 15% might be a good guess across richer economies). Instead, changes in currency in circulation are dominated by motives like hoarding. While transaction demand is reasonably well researched – for example, through the use of payment diary surveys (e.g. Bagnall et al. 2016) – still too little is known about non-transaction demand in general, and recent increases in particular. Overall, there is a need for better data and more research to improve our understanding of people’s use of cash.