On October 23, 84 Congressional representatives made a splash when they published a letter to U.S. Attorney General Jeff Sessions asking if those engaged in activism disrupting or damaging pipeline operations should face criminal prosecution as an act of terrorism under the USA PATRIOT ACT.

Spearheaded by U.S. Rep. Ken Buck (R-CO) and co-signed by dozens of other, primarily Republican, representatives, the letter pays homage to the First Amendment, while also noting that “violence toward individuals and destruction of property are both illegal and potentially fatal.” The letter, covered by several media outlets, was championed by the industry lobbying and trade association, the American Petroleum Institute (API), which said it “welcomed” the letter.

But according to a DeSmog review, API and other industry groups were a key part of bolstering the letter itself. API, along with the Association of Oil Pipe Lines (AOPL) and the Interstate Natural Gas Association of America (INGAA), is listed as among the “supporting groups” on the website DearColleague.us, which tracks congressional letters and their backers.

The website is run by Clayton Hanson, formerly a reporter for Roll Call and the Charlotte Observer, which says it exists as the “largest publicly available archive of free Dear Colleague letters.”

“Dear Colleague letters are official correspondence between members of Congress that lawmakers use to gauge or build support or opposition for legislation or other causes,” explains the DearColleagues.us website. In the case of the October 23 letter to Sessions, its genesis was a “Dear Colleague” letter written to other congressional offices to gather signatories for the cause. 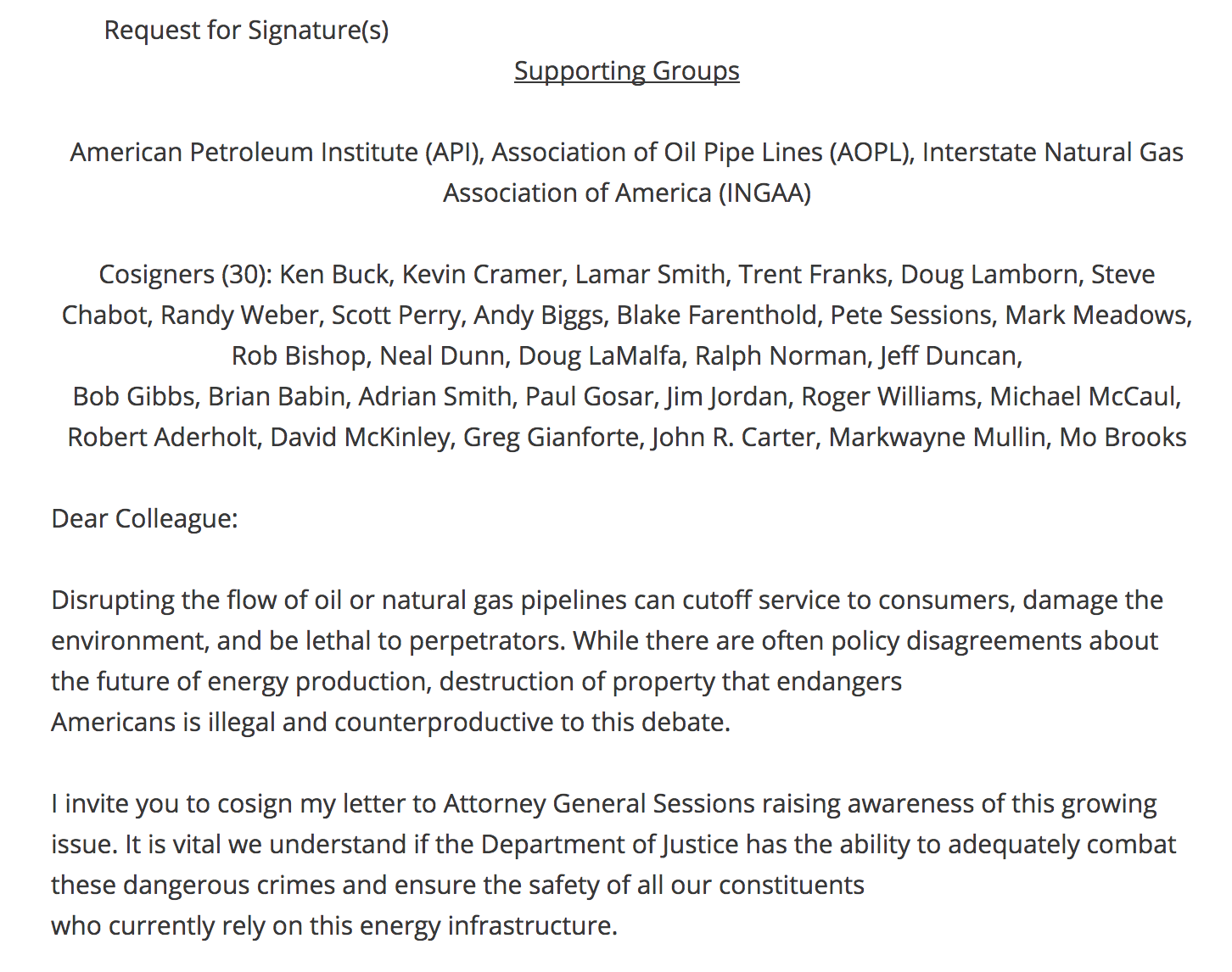 Beyond API, the letter was also promoted by the oil and gas industry-funded Western Energy Alliance.

Cathy Landry, vice president of communications for INGAA, says the organization did not ghostwrite the letter.

“INGAA is a supporting organization because we care about public safety, the environment, and the integrity of our pipelines and pipeline facilities,” Landry told DeSmog. “There are many ways to voice opinions about pipelines that do not involve putting the public, pipeline employees, or the perpetrators themselves in harm’s way — or threaten the environment — by trespassing and tampering with equipment. The Congressman and his staff wrote the letter and asked for our support.”

Hanson told DeSmog he sees this case as being a “chicken and the egg” situation, and that the process is often a collaborative one between congressional offices and industry.

“On many occasions, legislators work with industries to come up with the language for letters,” he said. “I think that the motivations are threefold. First is to say that they’re doing something to constituents, even if it doesn’t get anywhere. The second is that it’s something that they can they can talk about at fundraisers for that industry. Lastly, they’re used to put out feelers for support with members that they might not have a lot of contact with.”

This letter’s publishing comes in the aftermath of last year’s major uprising against the Dakota Access pipeline at the Standing Rock Indian Reservation in North Dakota.

Emails and memoranda previously obtained and reported on by DeSmog show that law enforcement and contract public relations professionals described those who participated in the Standing Rock protests as potential “terrorists.” Greenpeace USA and activists the organization collaborated with at Standing Rock are likewise being described as partaking in “eco-terrorist” activities in a recent lawsuit filed against the organization for alleged “racketeering,” as defined by the Racketeering Influenced Corrupt Organizations Act (RICO).

Importantly, it also follows other anti-pipeline actions by the “valve turners,” or those who participated in acts of non-violent civil disobedience to shut down the flow of Canadian tar sands into the U.S. at several pipeline pump stations. The activists affiliated with the Climate Disobedience Center, in those cases, have used the “necessity defense” to say that their activism was the last line of defense they had to halt runaway climate change which could ensue from the combustion of oil and gas flowing through pipelines.

In May, API published its own letter on the issue to the Department of Justice, which addresses the “valve turners” head-on and has a footnote on their activism.

“Investigations and law enforcement actions are a critical element to preventing criminality as well as potential environmental damage,” reads the letter, which like the recent congressional letter, pays homage to First Amendment rights. “While we respect individuals’ rights to free speech and peaceful protest, robust investigations into whether laws protecting critical energy infrastructure and the environment were broken is a responsible next step in certain situations.”

In its press release supporting the letter to to Sessions, API refers twice to it being a “bipartisan effort.” But only four of the 84 signatories, according to the outlet ThinkProgress, were Democrats.

“A key component of securing our nation’s energy infrastructure is ensuring that law enforcement has the tools needed to prosecute those who attack it,” API stated in its press release. “We appreciate this bipartisan effort and look forward to working with lawmakers and law enforcement in protecting our industry’s personnel, the environment, and communities across the country.”

The four Democrats have taken over $3 million in campaign contributions from the oil and gas industry throughout their political careers, ThinkProgress reported. And as Kevin Gosztola of the independent news organization Shadowproof pointed out, the letter’s lead author, Buck, also has been a major recipient of oil and gas industry money during his political career, pulling in a total of $400,000 in campaign contributions.

Gosztola also noticed that the letter in many ways mirrors an article written by the law firm Hunton & Williams in 2016 for its clients, a post which came after the “valve turner” incidents.

“In addition to being subject to common law claims — such as trespass, nuisance, burglary, and criminal mischief/sabotage — any person who knowingly and willfully damages or even attempts or conspires to damage or destroy an oil or gas pipeline or component may be subject to criminal prosecution under the federal Pipeline Safety Act,” reads the law firm’s brief. “Beyond civil and criminal liability, individuals damaging pipeline facilities could be investigated and/or prosecuted under other statutes depending on the circumstances, such as the Patriot Act or the Homeland Security Act for domestic acts of terrorism”

Both API and INGAA have, in the past, been clients of Hunton & Williams. The firm also represented many of the country’s largest coal companies in their lawsuits against the Obama administration’s implementation of the Clean Power Plan, which would have regulated greenhouse gas emissions from coal-fired power plants.

Just two days after the congressional letter was published, the Energy Equipment and Infrastructure Alliance’s (EEIA) new “Energy Builders” initiative announced the creation of an “Energy Infrastructure Incident Reporting Center.” EEIA is a “community of thousands of locally-based contractor, equipment, materials, and service businesses that support shale gas and oil operations,” according to its website. The initiative was also launched as a reaction to pipeline protests which have popped up nationwide.

The new database describes its purpose as “tracking and exposing attacks on critical energy infrastructure.”

“Incidents of eco-terrorism, sabotage, arson, vandalism, and violence are on the rise as severe actions have become a regular feature of pipeline protests, endangering public safety, the environment, jobs, and leaving taxpayers on the hook for millions of dollars,” the database’s website explains. “If you observe or hear about an incident of violence, sabotage, illegal trespass, or other opposition misconduct, please describe it briefly here and we’ll consider it for inclusion in the database.”

Annie Leonard, executive director for Greenpeace USA, decried the creation of the database in comments conveyed to the Associated Press.

“Corporations and their governmental enablers are desperate to silence dissent every way they can,” Leonard told AP. Leonard also called the new database “more fear-mongering by corporate bullies hoping to see what they can get away with in Trump’s America.”

API, Association of Oil Pipe Lines, and U.S. Rep. Buck’s office did not respond to a request for comment.