Cities around the world are experiencing unprecedented vertical growth, but there has been little study of the economics of tall buildings. This column summarises novel evidence on the determinants of the urban height profile and the cost of building tall, and derives implications for urban theory and policy. In contrast to standard urban economics models, there is a role for the supply side in determining horizontal land use patterns. Vertical expansion is unlikely to resolve affordability problems in growing cities.

Iconic metropolitan skylines, the widely visible signs of demand for density and the economic success of cities, are growing at an unprecedented rate. The past decade has seen the completion of 650 skyscrapers exceeding 200 metres. In 2015 alone, a record number of 106 tall buildings over 200 metres were completed, and this number is predicted to increase to 135 in 2016. From 2010 to 2015 the number of super-tall buildings – those exceeding 300 metres – has doubled from 50 to 100. Dubai’s 830 meter-tall Burj Khalifa set an impressive new record for the tallest structure in the world.

At the same time, many of the most economically successful cities have seen a steady increase in rents and housing prices. As young professionals are increasingly forced to share flats and first-time buyers are being crowded out of the market, providing affordable living space is becoming a policy priority in many cities. As an example, rising rents in London have become a prime concern not only for workers, but also for companies, coming second only to transport-related concerns. Ahead of the recent mayoral election, Boris Johnson (Conservatives) and Sadiq Khan (Labour) were directly competing over the best strategies for improving affordability (Evans 2016). While tall buildings are often criticised for jeopardising the historic character of neighbourhoods, a central argument brought up in their defence is that the additional supply brought by more intensive land use can mitigate pressure on housing markets. Yet, it is typically the most vertical cities that tend to be most expensive.

Theoretical research on the supply side of the urban economy dates back to the early neoclassical models in urban economics (Alonso 1964, Mills 1967, Muth 1969). These models predict that developers will substitute away from land as the price of land increases, which implies building taller. Empirically, however, the vertical structure of cities has remained understudied for a long time. Liu et al. (2015), among others, present evidence of a rent gradient within tall buildings, with particularly high premiums near the top. Little is known about the determinants of the urban height profile as well as the cost and limits of vertical expansion. In our recent paper, we attempt to fill this gap by analysing the relationship between the height of buildings, the price of land, and the cost of construction, focusing on tall buildings in Chicago (Ahlfeldt and McMillen 2017). Due to the absence of height regulation in most of its prime areas, Chicago is a good place to study the vertical structure of cities.

For our empirical analysis, we use a combination of micro-geographic data. From Emporis, a commercial data provider, we obtained a data set containing the exact locations, the year of construction, and the height of about 1,750 tall structures constructed since the 1870s. Additional information such as construction cost and floor area is available for a smaller set of observations. We complement these data with a novel micro-geographic panel data set of land prices covering the 140 years from the 1870s to the 2010s, which we compiled from various historic land value maps as well as from contemporary vacant land sales data. This unique combination of data allows us to match the height of a structure to the land price at the time of construction.

As shown in Figure 1, we find that land values and building heights are positively correlated, as suggested by neoclassic theory. The elasticity of height with respect to the land price at the time of construction is 45% for commercial buildings and 30% for residential buildings. The height elasticity about doubled over the 20th century. Following significant improvements in construction technology, developers now respond to increasing land prices by building taller at a much faster rate than in the past. Yet, building tall remains expensive. The height elasticity of construction cost with respect to height is about 25% for small structures (five floors and less), increasing in height, and exceeding 100% for super-tall structures.

The cost of height is higher for residential than for commercial buildings. This result is consistent with a larger loss of usable floor space as building height increases, and is reflective of some notable differences in the design of commercial and residential towers. Tall residential buildings typically have a smaller floor plate size (due to the need for more exterior walls), use different materials (e.g. all-concrete due to acoustic reasons), and have more complex facades (with balconies and sunrooms), all of which is not advantageous for the construction of very tall buildings. 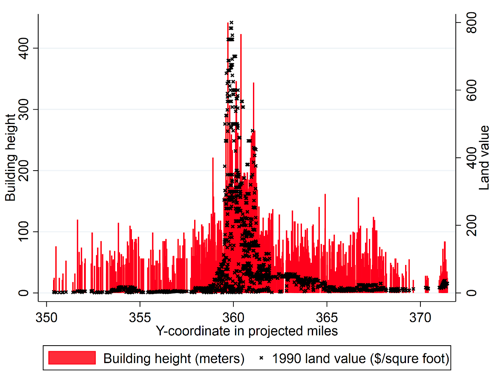 Notes: The building heights in 2014 are from Emporis.com. The 1990 land values are from Olcott’s blue books. The y-coordinate is the vertical Cartesian coordinate in the State Plane Coordinate System (Illinois East).

These results have important implications for the determinants of urban spatial structure, as they suggest that there is a supply-side mechanism that promotes the typical land-use segregation observed within cities. The strong concentrations of economic activity that are typically observed within clusters – such as central business districts, sub-centres, or edge cities – are likely to be attributable not only to strong agglomeration forces, but also to a relatively lower cost of accommodating commercial uses in tall structures that minimise the use of expensive land.

Our results also have important implications for policymakers concerned with the affordability of their cities, as they suggest that it is difficult to combat escalating rents by means of skyscraper development alone. Beyond intermediate heights, the cost of building tall increases quickly and at an exponential rate. Ultimately, affordable space can only be provided if a city does not only grow vertically, but also horizontally. This is an important lesson for cities with already dense land use and binding urban growth boundaries such as London.