Yves here. Reader UserFriendly sent this post with the message, “I can confirm this.” I can too. And before you try to attribute our reactions to being Americans, note that the study very clearly points out that its finding have been confirmed in “all of the world’s regions”.

By Bill Mitchell, Professor in Economics and Director of the Centre of Full Employment and Equity at the University of Newcastle, NSW, Australia. Originally published at billy blog

Here is a summary of another interesting study I read last week (published March 30, 2017) – Happiness at Work – from academic researchers Jan‐Emmanuel De Neve and George Ward. It explores the relationship between happiness and labour force status, including whether an individual is employed or not and the types of jobs they are doing. The results reinforce a long literature, which emphatically concludes that people are devastated when they lose their jobs and do not adapt to unemployment as its duration increases. The unemployed are miserable and remain so even as they become entrenched in long-term unemployment. Further, they do not seem to sense (or exploit) a freedom to release some inner sense of creativity and purpose. The overwhelming proportion continually seek work – and relate their social status and life happiness to gaining a job, rather than living without a job on income support. The overwhelming conclusion is that “work makes up such an important part of our lives” and that result is robust across different countries and cultures. Being employed leads to much higher evaluations of the quality of life relative to being unemployed. And, nothing much has changed in this regard over the last 80 or so years. These results were well-known in the 1930s, for example. They have a strong bearing on the debate between income guarantees versus employment guarantees. The UBI proponents have produced no robust literature to refute these long-held findings.

While the ‘Happiness Study’ notes that “the relationship between happiness and employment is a complex and dynamic interaction that runs in both directions” the authors are unequivocal:

The overwhelming importance of having a job for happiness is evident throughout the analysis, and holds across all of the world’s regions. When considering the world’s population as a whole, people with a job evaluate the quality of their lives much more favorably than those who are unemployed. The importance of having a job extends far beyond the salary attached to it, with non-pecuniary aspects of employment such as social status, social relations, daily structure, and goals all exerting a strong influence on people’s happiness.

The importance of employment for people’s subjective wellbeing shines a spotlight on the misery and unhappiness associated with being unemployed.

There is a burgeoning literature on ‘happiness’, which the authors aim to contribute to.

They define happiness as “subjective well-being”, which is “measured along multiple dimensions”:

Cantril’s ‘Ladder of Life Scale’ (or “Cantril Ladder”) is used by polling organisations to assess well-being. It was developed by social researcher Hadley Cantril (1965) and documented in his book The pattern of human concerns.

You can learn more about the use of the ‘Cantril Ladder’ HERE.

As we read, the “Cantril Self-Anchoring Scale … consists of the following”:

The Cantril scale is usually reported as values between 0 and 10.

The authors in the happiness study use poll data from 150 nations which they say “is representative of 98% of the world’s population”. This survey data is available on a mostly annual basis since 2006.

The following graph (Figure 1 from the Study) shows “the self-reported wellbeing of individuals around the world according to whether or not they are employed.”

The “bars measure the subjective wellbeing of individuals of working age” by employment status . 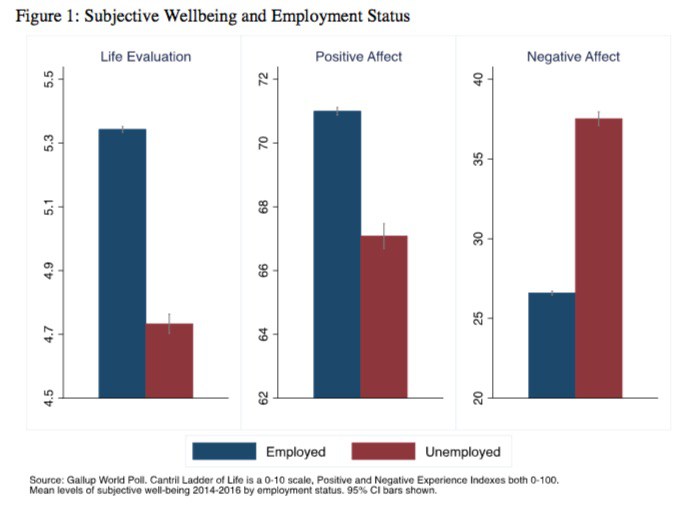 The results show the differences between having a job and being unemployed are “very large indeed” on the three well-being measures (life evaluation, positive and negative affective states).

People employed “evaluate the quality of their lives around 0.6 points higher on average as compared to the unemployed on a scale from 0 to 10.”

The authors also conduct more sophisticated (and searching) statistical analysis (multivariate regression) which control for a range of characteristics (gender, age, education, marital status, composition of household) as well as to “account for the many political, economic, and cultural differences between countries as well as year-to-year variation”.

The conclusion they reach is simple:

… the unemployed evaluate the overall state of their lives less highly on the Cantril ladder and experience more negative emotions in their day-to-day lives as well as fewer positive ones. These are among the most widely accepted and replicated findings in the science of happiness … Here, income is being held constant along with a number of other relevant covariates, showing that these unemployment effects go well beyond the income loss associated with losing one’s job.

These results are not surprising.

The earliest study of this sort of outcome was from the famous study published by Philip Eisenberg and Paul Lazersfeld in 1938.

They explore four dimensions of unemployment:

I. The Effects of Unemployment on Personality.

IV. The Effects of Unemployment on Children and Youth.

On the first dimension, they conclude that:

1. “unemployment tends to make people more emotionally unstable than they were previous to unemployment”.

2. The unemployed experience feelings of “personal threat”; “fear”; “sense of proportion is shattered”; loss of “common sense of values”; “prestige … lost … in … own eyes … and as he imagines, in the eyes of his fellow men”; “feelings of inferiority”; loss of “self-confidence” and a general loss of “morale”.

Devastation, in other words.

They were not surprised because they note that:

… in the light of the structure of our society where the job one holds is the prime indicator of … status and prestige.

This is a crucial point that UBI advocates often ignore. There is a deeply entrenched cultural bias towards associating our work status with our general status and prestige and feelings of these standings.

That hasn’t changed since Eisenberg and Lazersfeld wrote up the findings of their study in 1938.

It might change over time but that will take a long process of re-education and cultural shift. Trying to dump a set of new cultural values that only a small minority might currently hold to onto a society that clearly still values work is only going to create major social tensions.

Eisenberg and Lazarsfeld also considered an earlier 1937 study by Cantril who explored whether “the unemployed tend to evolve more imaginative schemes than the employed”.

The proposition was (is) that once unemployed, do people then explore new options that were not possible while working, which deliver them with the satisfaction that they lose when they become jobless.

The specific question asked in the research was: “Have there been any changes of interests and habits among the unemployed?”

Related studies found that the “unemployed become so apathetic that they rarely read anything”. Other activities, such as attending movies etc were seen as being motivated by the need to “kill time” – “a minimal indication of the increased desire for such attendance”.

On the third dimension, Eisenberg and Lazersfeld examine the questions – “Are there unemployed who don’t want to work? Is the relief situation likely to increase this number?”, which are still a central issue today – the bludger being subsidised by income support.

… the number is few. In spite of hopeless attempts the unemployed continually look for work, often going back again and again to their last place of work. Other writers reiterate this point.

So for decades, researchers in this area, as opposed to bloggers who wax lyrical on their own opinions, have known that the importance of work in our lives goes well beyond the income we earn.

The non-pecuniary effects of not having a job are significant in terms of lost status, social alienation, abandonment of daily structure etc, and that has not changed much over history.

The happiness paper did explore “how short-lived is the misery associated with being out of work” in the current cultural settings.

The proposition examined was that:

If the pain is only fleeting and people quickly get used to being unemployed, then we might see joblessness as less of a key public policy priority in terms of happiness.

… a number of studies have demonstrated that people do not adapt much, if at all, to being unemployed … there is a large initial shock to becoming unemployed, and then as people stay unemployed over time their levels of life satisfaction remain low …. several studies have shown that even once a person becomes re-employed, the prior experience of unemployment leaves a mark on his or her happiness.

So there is no sudden or even medium-term realisation that being jobless endows the individual with a new sense of freedom to become their creative selves, freed from the yoke of work. To bloom into musicians, artists, or whatever.

The reality is that there is an on-going malaise – a deeply entrenched sense of failure is overwhelming, which stifles happiness and creativity, even after the individual is able to return to work.

This negativity, borne heavily by the individual, however, also impacts on society in general.

The paper recognises that:

A further canonical finding in the literature on unemployment and subjective wellbeing is that there are so-called “spillover” effects.

High levels of unemployment “increase fear and heighten the sense of job insecurity”. Who will lose their job next type questions?

The researchers found in their data that the higher is the unemployment rate the greater the anxiety among those who remain employed.

The overwhelming conclusion is that “work makes up such an important part of our lives” and that result is robust across different countries and cultures.

Being employed leads to much higher evaluations of the quality of life relative to being unemployed.

The unemployed are miserable and remain so even as they become entrenched in long-term unemployment. They do not seem to sense (or exploit) a freedom to release some inner sense of creativity and purpose.

The overwhelming proportion continually seek work – and relate their social status and life happiness to gaining a job, rather than living without a job on income support.

Modern Monetary Theory (MMT) allows us to understand that it is the government that chooses the unemployment rate – it is a political choice.

For currency-issuing governments it means their deficits are too low relative to the spending and saving decisions of the non-government sector.

For Eurozone-type nations, it means that in surrendering their currencies and adopting a foreign currency, they are unable to guarantee sufficient work in the face of negative shifts in non-government spending. Again, a political choice.

The Job Guarantee can be used as a vehicle to not only ensure their are sufficient jobs available at all times but also to start a process of wiping out the worst jobs in the non-government sector.

That can be done by using the JG wage to ensure low-paid private employers have to restructure their workplaces and pay higher wages and achieve higher productivity in order to attract labour from the Job Guarantee pool.

The Series So Far

This is a further part of a series I am writing as background to my next book with Joan Muysken analysing the Future of Work. More instalments will come as the research process unfolds.

The series so far:

2. Employment as a human right.

3. The rise of the “private government.

4. The evolution of full employment legislation in the US.

6. Countering the march of the robots narrative.

7. Unemployment is miserable and does not spawn an upsurge in personal creativity.

The blogs in these series should be considered working notes rather than self-contained topics. Ultimately, they will be edited into the final manuscript of my next book due in 2018. The book will likely be published by Edward Elgar (UK).

That is enough for today!