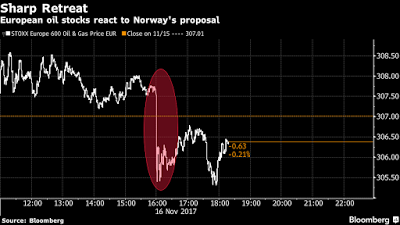 Two broad points before the specifics of this story.

First, the Divest from Oil and Gas movement is a real threat to Big Oil as an industry in the same way the Divest from South Africa movement was a threat to South African apartheid — it hits them where the money sits, in the wallet and not in the reputation, the latter of which can always be papered over with expensive ad campaigns telling us how wonderful the industry is.

It’s a real advantage having more money than any of your enemies, isn’t it.

The Divest from Oil and Gas movement is as threatening to the industry as lawsuits, which are also going on. A divestment movement essentially threatens to collapse the price of oil and gas company stocks, which impoverishes the investing class and, more particularly, the industry’s CEO class, since a good part of their pay is in stock.

Once stock prices fall below 50% of their value, it takes forever to build them back up, if indeed they ever recover.

Second, a collapse of oil and gas stock prices is, at some point, inevitable. Consider: If most or all of current in-the-ground fossil fuel reserves — a major basis of valuation of these companies — will stay in the ground as “stranded assets,” at some point the value of Exxon, Conoco and Shell will and should be nearly zero.

The only questions are when that will occur and what will be the triggering event. I’ve written before about the precariousness of Big Oil as an industry — see “Big Oil In Trouble, Enters “No Man’s Land” of Collapsing Balance Sheets” — and that reasoning still holds. Big Oil faces either death by government intervention (the world of power grows an aggressive conscience) or death by market (a permanent fossil fuel glut keeps prices unprofitably low).

Death by global panic as chaos overtakes our shiny, smart-phone world is also on the table. Death of the industry by one of those three forces will certainly occur, and sooner rather than later.

In the earlier piece I wrote:

Enter the “magic of the market.” If the price of oil is so cheap that it’s not profitable to dig it, because it’s so plentiful relative to demand, companies will collapse, go bankrupt. We’ve already seen that with small and mid-size U.S. fracking companies, many of which are so highly leveraged that they can’t make a profit on sales and they can’t finance their debt.

I don’t see the price of oil and gas recovering anytime soon, not with (a) the present market oversupply, and (b) a race to monetize remaining in-the-ground assets by frightened companies, large and small, a race that will guarantee the glut will continue indefinitely.

All we’re waiting for is a trigger. Will this be it? Bloomberg (h/t Hunter Cutting via Twitter):

Norway’s proposal to sell off $35 billion in oil and natural gas stocks brings sudden and unparalleled heft to a once-grassroots movement to enlist investors in the fight against climate change.

Norges Bank Investment Management would not be the first institutional investor to back away from fossil fuels. But until now, most have been state pension funds, universities and other smaller players that have limited their divestments to coal, tar sands or some of the other dirtiest fossil fuels.

Norway’s fund is the world’s largest equity investor, controlling about 1.5 percent of global stocks. If it follows through on its proposal, it would be the first to abandon the sector altogether.

“This is an enormous change,” said Mindy Lubber, president of Ceres, a non-profit that advocates for sustainable investing. “It’s a shot heard around the world.” [emphasis added]

The fact that it’s Bloomberg reporters covering this, the nation’s business best, all with concerned looks on their faces, and not just the good people at Friends of the Small County News, is itself convincing evidence that the Norwegian move to divest, if it occurs, will indeed be an industry problem.

The Bleak Future of Oil and Gas

Norway as a nation is in a unique position. A great deal of its wealth — more than 20% of its GDP — is already tied up in oil and gas production. This by itself represents a large exposure to industry pricing shocks. For that country’s sovereign wealth fund to also be owners of oil and gas stock makes no investment sense at all. Thus their discussion about divesting from that sector and diversifying, or even hedging by investing in the renewables sector.

But Norway’s problem is a general problem for other investors as well. At some point no investor will want to hold those stocks, given the “poised to fall” nature of the entire fossil fuel industry. An industry doesn’t have to falter before its stock prices falter; a price collapse could easily precede an unstoppable and escalating worldwide transition to renewables. After all, investors want either future growth or future dividends, or both, from their investments. “No growth on the horizon” plus “poised to collapse” is not a happy prescription for the price of any stock.

Call it “the magic of the market,” working for you for a change.

You Too Can Divest

Feel free to accelerate that magic. If your college or university is still invested in fossil fuel, consider asking them to follow Norway’s lead — and remind them that their money too could be vulnerable to a future “price shock.”

If your mutual fund is invested in fossil fuel, at Vanguard, say, or Fidelity, say the same thing to their customer representatives.

And if you are invested in fossil fuel, directly or indirectly, give some thought to transferring your investment elsewhere. After all, that would not only make good financial sense, but good moral sense as well.