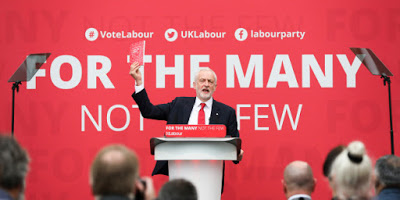 Government can spend money on the many, on the few, or on no one (by running a budget surplus). Which is the better choice?
A budget surplus on the government side is a budget deficit on the economy’s side.

Just a few simple points about the recent tax bill here, but points critical to understanding what will unfold in the coming months and years.

1. As they did in the 1980s, Republicans are laying a “deficit trap” for Democrats. As they did before, they’re blowing up the budget, then using deficit scares to force Democrats to “be responsible” about cutting social programs — “because deficits matter.”

2. Big Republican donors want to see social programs — Social Security, Medicare, Medicaid — cut to the bone. (Big Democratic donors want the same thing, by the way. It’s why Obama’s many Grand Bargain attempts didn’t cost him a dime in big donor campaign contributions. But Republican are in charge now, so the attack is coming from them, and quite an attack it is.)

In the 1980s Republicans ran up the deficit, then forced Democrats, via the Greenspan Commission’s Social Security “fix,” to raise taxes on the middle class to unnecessarily over-fund the Social Security Trust Fund. This converted SS from a mainly pay-as-you-go system that increased revenues as needed via adjustments to the salary cap, to a pay-in-advance system, the excess money from which was then loaned back to the government to appear to offset large deficits.

Notice the use of deficit fear in the push for cuts to social programs.

Today, Republicans are expanding the deficit again with their big “tax reform” plan — a giveaway to the donor class of both parties — and are already starting to use deficit fear to argue for cuts in what they call “entitlements” — Medicare, Medicaid, and eventually Social Security, even though Social Security is self-funded.

Notice the use of deficit fear in the push for cuts to social programs.

To the extent that Democrats are willing to accept the obligation to “be responsible” — under an entirely big-donor definition of “responsibility” — those cuts will be agree to. (Big donors think it’s irresponsible to give money to anyone but them.)

3. The reality — Deficits aren’t dangerous at all until there’s a big spike in inflation, which is nowhere near happening and won’t be near happening for a generation, after which global climate chaos will make all economics discussions moot.

4. The reality — Government spending is good. It’s the way government puts money into the economy, making it possible for you and me to buy things.

So ask yourself: Do you want your government to shrink the money supply for no good reason, year after year after year, by running budget surpluses, or to grow the amount of money in the private sector, making more available for use by people like … you?

Consider: The trillions spent on this giveaway to the already-rich could have been given to college students in debt, or people stillunderwater in their mortgages since the Wall Street-created crash of 2008. What would be the effect of that reallocation of money? People who are struggling would spend it and grow the economy.

What’s the effect of giving money to the already-rich? They buy another chateau in France, or bid on the next Van Gogh that turns up at Sothebys. Or give it to their tax lawyers to send to the Bahamas.

6. The question for you — Which of these three options would you rather the government choose:

The first is a plan for the few, disguised as the current big donor “tax” proposal.

The second is a plan for the many, a truly progressive, FDR-style economic policy.

The third is what Democrats will be asked to do after the already-rich have gotten their pile.

This is a trap. But there’s a way out. You can have nice things. All you have to do is convince your neighborhood Democratic Party office holder to give them to you.

Update: Here’s the above “what is money?” explanation in easy-to-digest (and share) video form:

Thanks to Twitter friend Alan Parker for the link. Enjoy.