The Wall Street Journal did a useful bit of sleuthing. In a new story, Nearly 5 Million Americans in Default on Student Loans, the Journal described how student borrowers are failing to pay despite the economy supposedly being in good shape. However, anyone who has been paying attention knows that 94% of the jobs created in the Obama Administration were part-time, and there’s no reason to think the quality of jobs has increased under Trump.

Key section of the article:

The number of Americans severely behind on payments on federal student loans reached roughly 4.6 million in the third quarter, a doubling from four years ago, despite a historically long stretch of U.S. job creation and steady economic growth.

In the third quarter alone, the count of such defaulted borrowers—defined by the government as those who haven’t made a payment in at least a year—grew by nearly 274,000, according to Education Department data released Tuesday.

The total number of defaulted borrowers represents about 22% of the Americans who were required to be paying down their federal student loans as of Sept. 30. That figure has increased from 17% four years earlier.

Now let us put aside that the “steady economic growth” is the new normal, where the benefits of economic growth are going at unprecedented levels to capital, reflected as the share of GDP represented by profits, as opposed to wages. Recall that Warren Buffett warned in the early 2000s that the profit share of GDP, which was then approaching 6%, was unsustainably high. He’s been silent as the profit share has risen to 11% to 12% of GDP (estimates vary due to differences in computation methods).

But what should also capture your attention is the definition of default: not having made a payment in a year or more. That is mind-bogglingly lax. I encourage readers who are better versed in retail banking than I am to pipe up (yours truly focuses on the “wholesale” side).

Technically, a loan is in default any time a payment is missed. Some agreements allow for a grace period; others happily charge late fees. However, with notable exceptions like mortgage servicers who profit from foreclosures, lenders and their agents want borrowers to get current.

At least as of a few years ago, and I assume this is still true, for credit cards, being sixty days plus late on payments is treated as delinquent and will be reported to credit agencies; 90 days late will be classified as non-performing. In the aftermath of the crisis, analysts looked askance at bank regulators giving banks “forbearance” on home equity loans where there had been no payment in 180 days plus, yet the regulators weren’t requiring that they be charged off.

Now one might argue that the astonishingly permissive definition of default as “one year or more late” is that might be when default (penalty) interest rates or other charges kick in. But that isn’t the case either. From the Department of Education’s website:

If your loan continues to be delinquent, the loan may go into default. The point when a loan is considered to be in default varies depending on the type of loan you received.

For a loan made under the William D. Ford Federal Direct Loan Program or the Federal Family Education Loan Program, you’re considered to be in default if you don’t make your scheduled student loan payments for a period of at least 270 days (about nine months).

For a loan made under the Federal Perkins Loan Program, the holder of the loan may declare the loan to be in default if you don’t make any scheduled payment by the due date.

In other words, using the DoE’s own default definitions, or more conventional ones, reporters and analysts would deem student loans to be in default sooner than at one year of non-payment, with the result that the number of loans in default would be even higher.1

In a bit of synchronicity, a post by New Deal Democrat at Angry Bear, with lots of supporting charts, explains why the current situation, with weak wage growth, including many periods of month-to-month wage deflation during our nominal expansion, plus high consumer debt levels, has the potential to evolve into a classic deflationary spiral:

One of the important dynamics why recessions end is that inflation decelerates more than wage growth. Thus, for the 90% or so of people who still have jobs, there are some compelling bargains, enough to jumpstart more spending.

That all gets short-circuited if wages actually decline. Then, the fact that debt payments, unlike prices, do not decline, overwhelms the possibility of spending growth. That was one of the most ruinous aspects of the 1929-33 great contraction. 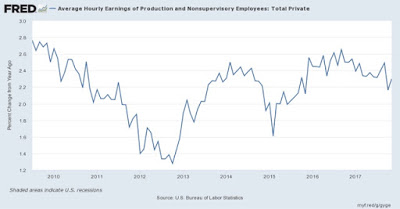 This is why I keep harping every month on the poor wage growth shown in the jobs reports. Here we are, over eight years into the economic expansion, and wage growth is actually declining a little, now at just 2.3% YoY<... The point is that, if actual wage deflation were to occur, because debt payments do not deflate, the dynamic can take on a life of its own, creating a vicious downward spiral, as it did in 1929-32. Imagine such a deflationary event were to begin to occur in, say, late 2019. Imagine that the makeup of Congress then is similar to what it is now. Now imagine how such a Congress would approach such a deft deflation dynamic. That is the stuff nightmares are made of

1 Some readers might ask why your humble blogger has not attempted running an analysis using more stringent definitions of default than the Journal used. First, the Journal story isn’t based on the usual press release linking to a report of some sort; I can’t find any public pronouncement at the difficult-to-search DoE site, so it appears (good for them!) that they did the analysis based on an update to the relevant DoE data set. However, the DoE has a bunch. Second, and at least as important, I don’t report regularly enough on consumer lending or student loans (per the comments above) to have a high degree of confidence in terms of what standards to apply were I to figure out what data set the Journal used. So the result is unless I were to plan to update this analysis every quarter, it’s not worth the investment of up-front time relative to the value to readers. Hopefully asking this question will lead those closer to this data to kick the tires to do more refined work.