Image you’re Jeff Bezos, circa 1998. You’re building a company (Amazon) that stands to make you and your compatriots vastly rich.

But looking forward, you see a problem: if your company makes profits, it will have to pay taxes on them. (At least nominally, in theory, 35%!) Then you and your investors will have to pay taxes on them again when they’re distributed to you as dividends. (Though yes, at a far lower 20% rate than what high earners pay on earned income.) Add those two up over many years, and you’re talking tens, hundreds of billions of dollars in taxes.

You’re a very smart guy. How are you going to avoid that?

Simple: don’t show any profits (or, hence, distribute them as dividends). Consistently set prices so you constantly break even. This has at least three effects:

1. You undercut all your competitors’ prices, driving them out of business. Nobody who’s trying to make a profit can possibly compete.

3. You build a bigger and bigger business.

Number 3 is how you monetize this, personally. The value of the company (its share price/market cap) rises steadily. Obviously, a business with $136 billion in revenues (2016) is going to be worth more than one with $10 or $50 billion in revenues — even if it never shows a “profit.” You take your profits in capital gains.

Because stock-market investors are always going to be thinking: “They could always turn the dial from market share to profits. Just raise prices a skootch, and reap the harvest. In spades.”

But: they never do. It’s like a perpetual-motion machine, or holding yourself up by your own bootstraps. All that rising valuation is eternally based on the fact that they could raise prices and deliver profit (and yes: they could). In the meantime the business both generates and has massive value. It employs 270,ooo people, delivers zillions in employee compensation, pays zillions more to suppliers, receives hundreds of billions in revenues, and dominates whole segments of multiple industries. Are there really no “profits”? Nobody’s being irrational here.

Here are the results of your long-term plan: 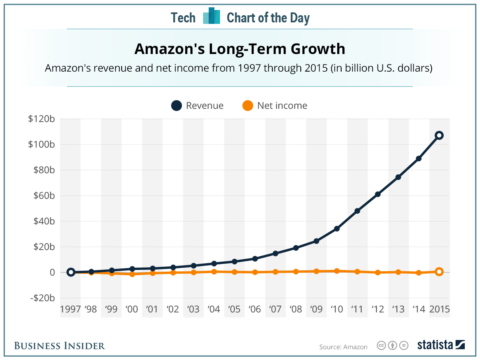 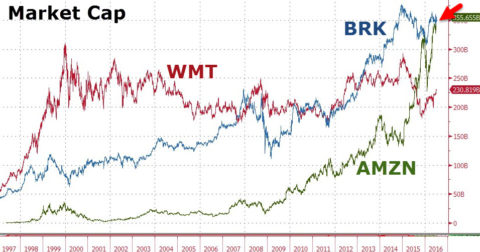 Half a trillion dollars in revenues.

And instead of being double-taxed on profits for all that time, investors’ income is taxed once, at the low 20% capital gains rate. And that, only when those gains are “realized” through sale of the stock. In the meantime it’s all tax-deferred — yet another huge effective-tax-rate win for shareholders. The longer they hold, the bigger the win. If they pass the stock on to their heirs, those gains are never taxed at all.

And just to mention in passing, none of that shareholder income ever appears as household income in the national accounts. It might as well not exist.

You gotta be impressed. That Jeff Bezos is a very smart guy.