I wanted to start the new year with an optimistic post. Sadly, the optimism fairy hasn’t paid me a visit today.

Instead, I find I have plastics on my mind, since a last-minute change in plans has found me enjoying the hols stateside. As I’ve written before, every time I return to the US, where I was born and bred but at present spend very little of my time, I’m struck by just how ubiquitous over-packaging is– and how difficult it is to avoid.

This problem infects just about everything, down to the simple purchase of food. I enjoy cooking and baking, and am a bit of a purist about doing everything from scratch. And as I’ve bustled about the kitchen for the last several days, I’ve been disturbed by the sheer volume of metal, cardboard, and plastic, plastic, plastic that enshrouds even the most basic foodstuffs.

So, although one can in theory commit to reducing one’s consumption of plastics, there’s a limit to how much an individual can do– no matter how diligent one is (see this earlier post, Plastic Free July: What YOU Can Do to Reduce Plastics Waste).

To their credit, many governments have recognized that we face a plastics crisis and it’s necessary to stop using so much of the stuff.  So, around the world, countries, states, and cities have undertaken limited measures to reduce plastics use. In 2016, France became the first country to ban plastic cups and cutlery, extending an earlier ban on plastic bags. Delhi in 2017 banned use of disposable plastic. Hawaii was the first US state to ban the use of single use shopping bags at checkout in 2016, followed by California but these rules exempt bags used for bundling meat or produce, and also don’t seem to touch all the other ways plastic is used– we’re talking about much more than shopping bags here and takeout containers.

These initiatives are all no doubt well-intentioned, but they fail to grapple with the full scope of the problem. And that’s to ban not just the use of plastics– single use or otherwise– but to drastically curtail the production of them, at source. This is a problem that’s only developed recently. Given the environmental consequences, we can– and should– easily do without generating this waste in the first instance.

That seems to me to be where the focus should be. And that’s a much larger and more difficult problem that looks destined to get much worse, due to investments being made by some of the very same companies that have brought us climate change. As The Guardian reports:

Fossil fuel companies are among those who have ploughed more than $180bn since 2010 into new “cracking” facilities that will produce the raw material for everyday plastics from packaging to bottles, trays and cartons.

The new facilities – being built by corporations like Exxon Mobile Chemical and Shell Chemical – will help fuel a 40% rise in plastic production in the next decade, according to experts, exacerbating the plastic pollution crisis that scientist warn already risks “near permanent pollution of the earth.”

“We could be locking in decades of expanded plastics production at precisely the time the world is realising we should use far less of it,” said Carroll Muffett, president of the US Center for International Environmental Law, which has analysed the plastic industry.

“Around 99% of the feedstock for plastics is fossil fuels, so we are looking at the same companies, like Exxon and Shell, that have helped create the climate crisis. There is a deep and pervasive relationship between oil and gas companies and plastics.”

So, just in case their efforts to ruin the planet by heating it up are either checked or don’t succeed, some of the same companies apparently think that they should diversify their environmental depredation strategy and drown us in yet more unnecessary plastic. Fantastic! Party on!

Now, it’s apparent that Trump has yet to see a fossil fuel friendly policy that he doesn’t like.  So I’m not holding out for the United States to take any leadership role in reducing the production of plastics. (For more on the related topic of comprehensive waste management, see this post, Waste Not, Want Not: Right to Repair Laws on Agenda in Some States, which discusses the EU’s circular economy initiative.)

But I should point out that it was under his predecessor that fracking boomed, as reported in this cheerleading CNN piece, The Obama Oil Boom. And that expansion, according to The Guardian, lies behind the plastics investment surge. So we should by all means give credit where credit is due:

The huge investment in plastic production has been driven by the shale gas boom in the US. This has resulted in one of the raw materials used to produce plastic resin – natural gas liquids – dropping dramatically in price.

The American Chemistry Council says that since 2010 this has led to $186bn dollars being invested in 318 new projects. Almost half of them are already under construction or have been completed. The rest are at the planning stage.

“I can summarise [the boom in plastics facilities] in two words,” Kevin Swift, chief economist at the ACC, told the Guardian. “Shale gas.”

He added: “There has been a revolution in the US with the shale gas technologies, with the fracking, the horizontal drilling. The cost of our raw material base has gone down by roughly two thirds.”

The Guardian article makes for grim reading and further hammers the point about the economic interests that have invested in making the global plastics problem worse, not better:

However, campaigners warn that despite the rising tide of concern, powerful corporations are pressing ahead with a new generation of plastic production facilities that will swamp efforts to move the global economy away from single use, throw away plastic products.

Steven Feit, from the Centre for Environmental International Law which has researched the impact of the US shale boom on plastics, said: “The link between the shale gas boom in the United States and the ongoing – and accelerating – global plastics crisis cannot be ignored.

“In the US, fossil fuel and petrochemical companies are investing hundreds of billions of dollars to expand plastic production capacity… All this buildout, if allowed to proceed, will flood the global market with even more disposable, unmanageable plastic for decades to come.”

Once the hogs start feeding at this particular trough, it’s going to be very difficult for governments to make much headway in reducing the global use of plastics. To be sure, it’s possible to reduce plastics use locally– or even up to the national or EU-wide level. But with these investments being made in increased capacity, the plastics churned out will only be dumped into some other market, fouling land and waters, and with much of them eventually finding their way to the oceans.

It’s not just the self interest of fossil fuel and petrochemical companies that conflicts with the public interest– if I may be permitted such a quaint phrase. I didn’t know whether to laugh or cry at Michigan’s take on plastics, as reported by Treehugger. Although the state took this action last January, it’s still germane. At that time, Michigan enacted a ban on bans on plastic, preventing local governments from “regulating the use, disposition, or sale of, prohibiting or restricting, or imposing any fee, charge, or tax on certain containers.”

As Treehugger points out:

So here we have the State of Michigan, which borders on four of the five Great Lakes, which probably has shoreline (3288 miles) than any other state than Alaska, effectively banning local governments from doing anything to stop the use of disposable plastics in bags, cups, bottles or anything, all of which break down into little bits that can get into the lakes. 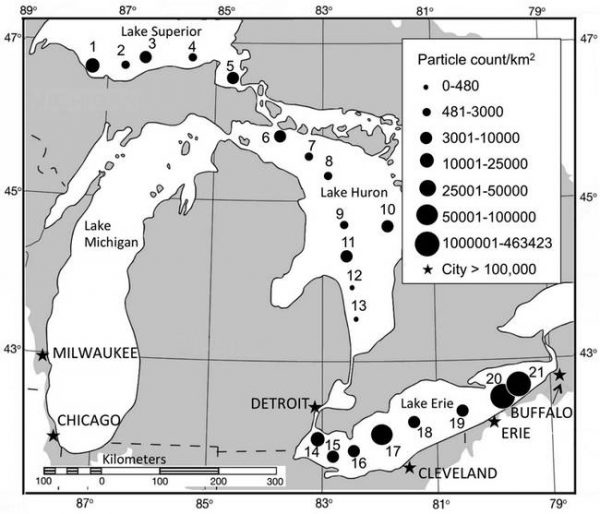 Why would the great state of Michigan do this? Well, it’s yet another business-friendly policy to trash the environment, this one undertaken at the behest of the state’s restaurant industry. Over to TreeHugger again:

Currently, there are a number of local units of government across the state that have taken action to implement additional taxes and fees on businesses that not only use plastic bags, and auxiliary containers such as Styrofoam cups and cardboard boxes.

“With many of our members owning and operating locations across the state, preventing a patchwork approach of additional regulations is imperative to avoid added complexities as it related to day-to-day business operations” said Robert O’Meara, Vice President of Government Affairs at [The Michigan Restaurant Association] MRA.

How can I top that? I can’t.  So, it’s back to the kitchen, where I’m planning on making a couple of more stollen, some cookies, another batch of ice cream or two, and to experiment with some recipes in a new Persian cookbook.

And, before I forget: Happy New Year, dear readers. May 2018 be a joyful and healthy one for one and all.