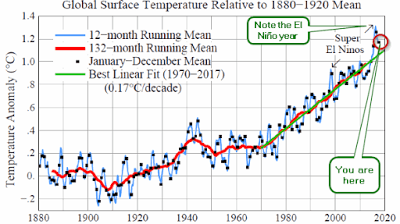 This is an update on the coming climate train wreck. The numbers are in for 2017, not just the global temperature itself (see graph above), but also the clearly climate-related damage that was done — the fires, hurricanes and other extreme-weather events. 2017 ranks in the top five hottest years on record, and broke the record for climate-related damage.

About global temperature in 2017, look at the chart above and note three things.

With No El Niño, 2017 Was Still the Second Hottest Year in the Instrumental Record

First, the two most recent “super El Niño” events, in 1997-98 and 2015-16, clearly represented peaks or spikes in global warming, while the intervening years hung close to the 12-month and 132-month running means.

Not so in 2017. Despite the lack of El Niño conditions in 2017, the year still placed second on the list of the hottest years ever recorded. Dr. James Hansen:

Global surface temperature in 2017 was the second highest in the period of instrumental measurements in the Goddard Institute for Space Studies (GISS) analysis. Relative to average temperature for 1880-1920, which we take as an appropriate estimate of “pre-industrial” temperature, 2017 was +1.17°C (~2.1°F) warmer than in the 1880-1920 base period. The high 2017 temperature, unlike the record 2016 temperature, was obtained without any boost from tropical El Niño warming.

This should be concerning to everyone, for the reason explained below.

(By the way, note that the statement above covers only “global surface temperature” and not oceanic warming as well, especially deep oceanic warming. The entire planet is being heated by our use of fossil fuel, not just the surface.)

The Rate of Global Warming May Be Accelerating

Second, this data means we may be entering a period of accelerated warming. I think most people assume that global warming and its effects will be linear, will proceed along a roughly straight line that allows us to calculate how much we can delay in dealing with it. Not so.

I’ve argued for some time that linearity is not guaranteed, is in fact highly unlikely, and that the chief cause of global warming, the injection of CO2 into the atmosphere, seems already to have accelerated. In a piece earlier last year, “Atmospheric CO2 Jumps +4 ppm in June Compared to June 2015“, I wrote:

Consider a simple calculation. Most governments that try to show they are interested in ending man-made CO2 emissions have “exit rates” — rates at which humans go to zero emissions — which nonetheless have us increasing emissions as late as 2050. The underlying assumption is that if we start the count at 400 ppm in 2014 (per the monthly chart at the above), then add +2.11 ppm per year, we don’t get to 450 ppm for roughly 20-25 years (allowing for modest acceleration in the growth rate). But if atmospheric CO2 growth suddenly zooms to +4 ppm/year starting with this year’s 406 ppm, we’re at 450 ppm in 11 years.

As I noted then, eleven years from now is 2027, and 450 ppm is game-over — partly because global warming will have shot well past +2°C, producing enough social, political, economic and military chaos to make a global solution impossible; and partly because if we haven’t stopped Exxon et al before then, we never will, and the process will go to termination.

“Pre-industrial or worse” is not what we want for our species. “We” in the previous sentence includes only the non-sociopaths among us — those of us not in charge of U.S. and global energy policy.

Global Warming Has Already Reached +1.2–1.4 Degrees Above Pre-Industrial, Depending on How “Pre-Industrial” Is Defined

If global warming is accelerating along with global CO2 emissions, and the most recent peak was warming of +1.2°C, the aspirational Paris target of halting global warming at +1.5°C is impossible, despite this bit of (desperate) optimism:

A leaked draft of the IPCC’s forthcoming report on keeping global warming at 1.5 degrees Celsius gives reason to hope that the target is attainable. But only if urgent action is taken immediately, warns Dr Bert Metz.

At this point, all optimism should be desperate, and that desperation should drive emergency action, something I and others have written many time about.

One could argue, in fact, that we’re actually much closer to +1.5°C global warming than even Hansen, or the IPCC, recognizes. It’s all a mater of where you measure from in calculating the “pre-industrial” baseline.

The IPCC, per the link above, puts “global average temperatures” at “just 1 degree Celsius (°C) above pre-industrial levels” — noticeably lower than Hansen’s number.

• Dr. Michael Mann (quoted here), like Dr. Hansen, gets a higher number with what he considers to be an even more appropriate baseline:

It has been widely reported that 2015 will be the first year where temperatures climbed to 1C above the pre-industrial. That might make it seem like we’ve got quite a ways to go until we breach the 2C limit. But the claim is wrong. We exceeded 1C warming more than a decade ago. The problem is that here, and elsewhere, an inappropriate baseline has been invoked for defining the “pre-industrial.” The warming was measured relative to the average over the latter half of the 19th century (1850-1900). In other words, the base year implicitly used to define “pre-industrial” conditions is 1875, the mid-point of that interval. Yet the industrial revolution and the rise in atmospheric CO2 concentrations associated with it, began more than a century earlier. …

[U]sing the more appropriate 1750-1850 pre-industrial baseline, we see that the Northern Hemisphere average temperature (gray squiggly curve [in Figure 3 at the link]) has already warmed nearly 1.2C [as of 2013; Figure 3 was published in 2014]. Temperatures have exceeded 1C above pre-industrial levels for most of the past decade. [emphasis added]

Dr. Mann’s current warming number, using his logic, would be +1.3°C or a little higher.

• I took a less cautious look at determining the baseline (here) and found “the global temperature low at about 1900–1910 … is a good proxy for the pre-industrial temperature low pointed out in the chart [at the link]. We can take the temperature in that later period (1900 or so) to be nearly the same as the “pre-Industrial low.”

This gives a present global warming number of approximately +1.4°C.

None of these numbers is good if the health of the many, not profit for the few, is one’s primary concern.

However you consider the situation — non-El Niño spikes in temperature; accelerating CO2 emissions and very possibly warming as well; or the uncertain definition of the “pre-industrial baseline” (a somewhat politicized discussion in the case of the hyper-cautious IPCC) — no matter what lens one looks through, we’re clearly at a watershed.

The second is a prediction. In my estimation, people are much more aware — today — of global warming than any in the corporatized media gives them credit for. That awareness, unreported for now, will come bursting though sooner than expected, with undeniable, and non-linear, consequences.