A Wall Street Journal article gives an overview of a topic we discussed briefly before: an escalating crisis in the long-term care business. As we explain in more detail below, the entire industry massively underpriced policies that cover nursing home and other types of long-term care for the elderly. They are now playing catch-up with hefty rate increases. This puts those who paid for coverage in a terrible fix: do they abandon the policies entirely, when they have paid in substantial amounts of money and the policies do have real economic value should they need them? Do they reduce the amount of coverage so they can keep the premiums affordable? Or do they take the hit, when it might mean serious cutbacks to spending or retirement savings.

7.3 million individuals, equal to nearly 20% of the people over 65, are grappling with the dilemma of what to do about long-term care sticker shock. Some examples from the Journal’s story:

In the past two years, CNA Financial Corp. has increased the annual long-term-care insurance bill for Ms. Wylie and her husband by more than 90% to $4,831. They bought the policies in 2008, which promise future benefits of as much as $268,275 per person. The Wylies are bracing for more increases.

To make their budget work, she has taken on a part-time landscaping job. The couple has delayed home maintenance, travels less and sometimes rents out their house. “We feel like we are out on a limb here, and these policies are supposed to be our safety net,” she says…

And these policies serve an real need: 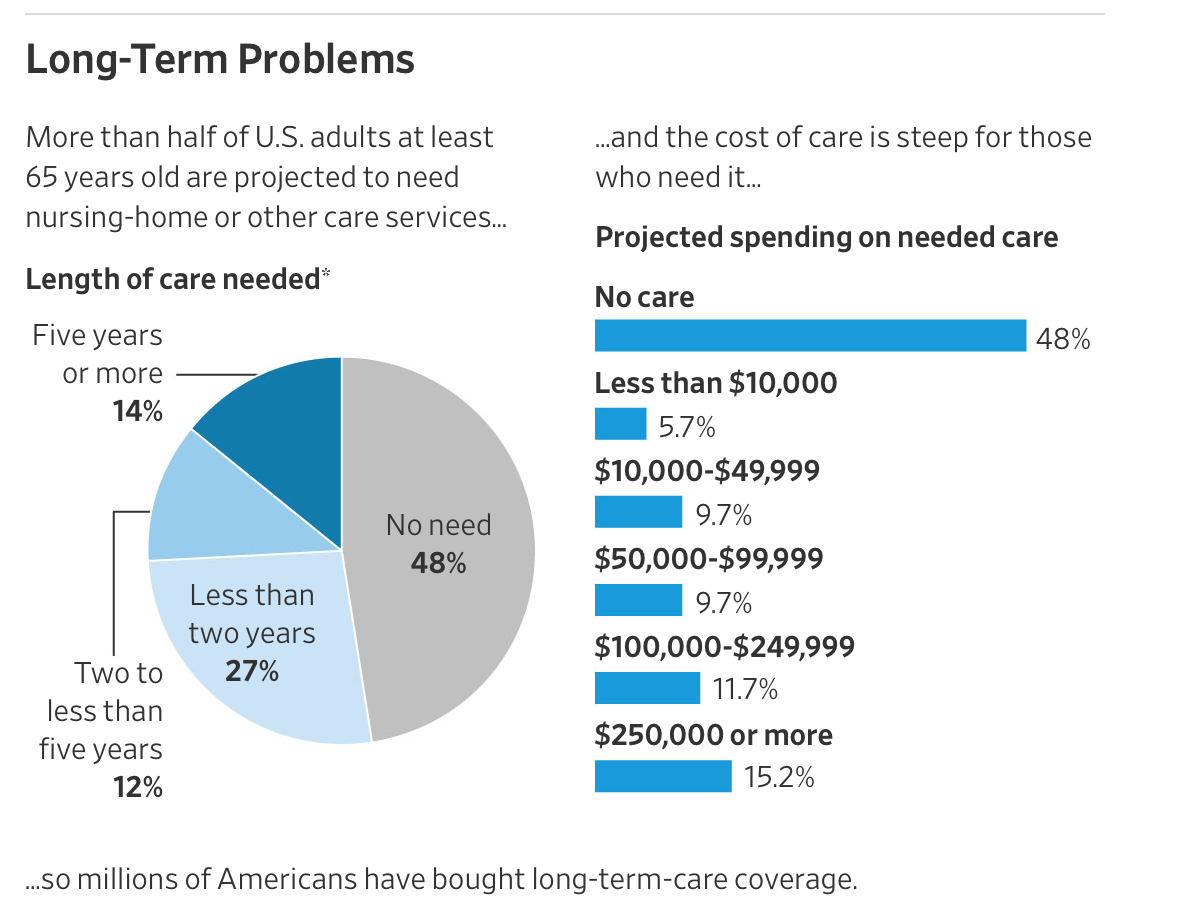 And there is an additional set of issues even for those who can afford to pay for pricier coverage. As we described in our earlier post, even the long-term care insurer that is supposedly the best in terms of paying claims, Genworth, now has many complaints on consumer websites. My own experience, when my mother was injured long enough that she might be submitting a claim, was that I got a HAMP-level run-around: they would not deal with me over the Internet and I was repeatedly disconnected when put on hold. When I finally reached a rep, I was told that they would need to send a nurse to evaluate my mother…but the phone rep could not schedule that visit and claimed they could not reach the unit responsible, and would have someone call back instead. We never got that call.

In other words, the typical behavior of insurers under duress is to engage in insurance fraud, which is to refuse to pay for valid claims. One way to do that is to put customers to go through so many hoops that some give up. One consumer complaint I read more than once regarding Genworth was that they would repeatedly claim that they had not received powers of attorney from children trying to get claims processed on behalf of aged parent. In evaluating whether it was worth it to renew my mother’s Genworth policy, I have assumed she will have to spend $10,000 in nastygrams to get claims processed.

Many adults don’t realize until they approach retirement age that Medicare does not provide for coverage in what are called long-term care facilities, such as assisted living (where the residents aren’t hospitalized but need help with some activities, like bathing or getting dressed) and nursing homes. Medicaid does, but it has strict financial eligibility limits (among other things, you will effectively be required to exhaust your financial assets). And based on reports by readers, facilities that accept Medicaid patients often do not provide a high standard of care.

Insurers rushed to fill this gap in a serious way about 40 years ago. Long-term care policies will reimburse the cost of care in approved facilities, or in many cases with approved home health care services, up to a daily maximum amount. Policies typically also have a maximum total payout amount (which may be expressed in other terms but amounts to the same thing).

The problem was twofold. One was that the insurers had no experience in offering this sort of policy and made unduly optimistic assumptions, such as how many people would lapse (stop paying before they used the policy), how long they would live, and how many days of care they would consume if and when they needed care. Ironically, when my father was looking at whether to get a long term care policy over 30 years ago, he was frustrated at his inability to get data to make any sort of an informed decision. It turns out the insurers themselves didn’t have enough of a track record to be doing any better than guessing, and they guessed wrong.

To give an idea of how seriously off some of their basic assumptions were, they assumed a lapse rate of 5% a year. Remember, when someone lapses, that’s a boon to the insurer and everyone else in the pool, because the funds they paid into the policy they abandoned goes to everyone else. It turns out that everyone who purchased these policies understood how valuable they could be and paid like clockwork. The Wall Street Journal reports that the lapse rate was 1%.

The Journal described other assumptions that proved to be wildly off the mark:

It turned out that nearly everyone underestimated how long policyholders would live and claims would last. For example, actuaries, insurers and regulators didn’t anticipate a proliferation of assisted-living facilities. And they assumed families would do whatever they could to avoid moving loved ones into nursing homes, holding down policy claims.

By the late 1990s, assisted-living facilities were widely popular. Especially at well-run ones, staff members looked after policyholders so well that they lived years longer than actuaries had projected.

Residents “are taking their medications; they are not falling,” says Mr. Bodnar, now a senior executive at Genworth.

A possibly even more fundamental modeling issue is that insurers arguably have and continue to be using the wrong type of model1.

The second big problem is years of super low interest rates. This has meant that investment returns for year have fallen vastly short, on an inflation-adjusted basis, of what they had forecast. The results have been devastating for all long-term investors: life insurers, pension funds, and ordinary people trying to save for retirement.

On top of that, some insurers like Genworth offered policies that promised no rate increases over the life of the policy. Consumers who purchased them and made plans assuming the payments were fixed, have been hit in the last few years with massive increases.

The rate of individuals buying new policies has plunged now that insures are charging more for them. Again from the Journal:

The latest policies typically cover less and cost more. According to the insurance agents’ trade group, a 60-year-old couple can expect to spend about $3,490 in combined annual premium for a typical policy that starts out with a maximum payout of $164,050 per person and then grows 3% a year to $333,000 when the couple is 85.

People approaching 60, which is usually the latest these insurers will write policies, don’t have good options unless they have a net worth of over $2 million, since then it makes more sense to roll the dice and self insure. By contrast, some financial advisers argue that if you have less than $300,000 in assets, you are better off spending them down and going into a Medicaid home if need be. But there are plenty of people with more than $300,000 in assets (say some accumulated home equity plus some savings) who would find it hard to pay the premiums, even if they kept working past normal retirement age.

Given the plunge in people buying these policies, the US is clearly moving towards the neoliberal answer of “Die faster!” Better approaches for providing in-home care could reduce the overall burden, but there seems to be no policy will to move in that direction.

In about 2003 I had professional reasons to research and publish a detailed study on LTC insurance. There are several important and structural reasons for the current situation that extend beyond Genworth.

First, as with almost all insurance products, the policy is complex, hard to understand and for almost all who purchase them it is unclear what the coverage really is until a claim filed.

Second, LTC became a hot area for growth in the industry and was being heavily pushed by the consulting actuaries. It was one of the few areas of growth once variable annuities collapsed with the market in 2001.

Third, this is a lapse supported product and the industry got the lapse assumptions horribly wrong. In other words, they assumed people would pay premiums for a few years then stop. People realized they need this coverage and kept paying the premiums.

Finally, there is an important regulatory component. Life insurers report their financial results in blue books and property-casualty (P&C) insurers in yellow books. LTC, while in blue books, is much more like workers comp insurance which is in yellow books. Yet, the life insurers treated it as though they could use existing life insurance data and thinking, as opposed the loss development triangles common to P&C insurance. In our analysis we constructed pro forma loss reserve triangles for LTC and they clearly showed that there were massive reserve deficiencies.

The result of this was that they needed to both increase rates and significantly increase reserves — billions of dollars worth.

Finally, at the time the reaction of the industry to this work, it was presented in a plenary at the annual meeting of the Society of Actuaries, was to attack the work during the session. Not rebut or say it was wrong.