Cape Town’s water crisis is a prime example. We’ve been warning for years that potable water is humanity’s most scarce natural resource. Some Australian physicists tasked to modeling Australia’s use and import/export of materials estimated that potable water would become a scare resource globally first, by around 2050. And I suspect their estimates of the pace of climate change were less dire than what has come to pass so far. 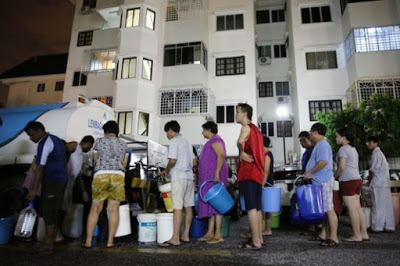 What water rationing looks like, minus the anger (source).

Earlier we wrote about the extreme water shortage in Cape Town, South Africa. Things are so dry there, and the dams so low, that it looked like the city would have to shut off their water taps by April 29, which they’re calling “Day Zero.” Seriously.

This piece updates that information and adds a couple of points.

First, the update, via the (Rupert Murdoch-owned) National Geographic:

How Cape Town Is Coping With Its Worst Drought on Record

Editor’s Note: On Monday, February 5, Cape Town officials announced that the city had gotten “a slight reprieve” and that “Day Zero” had been pushed back to May 11. The reason: Fruit growers and other agricultural operations in the region have used up their annual water allocation, making more water available for the city. “There has not been any significant decline in urban usage,” deputy mayor Ian Neilson stressed in a statement. With a heat wave forecast to increase evaporation from reservoirs, he said, Capetonians must reduce consumption “to prevent the remaining water supplies running out before the arrival of winter rains.”

A few things to note about this:

More from the report, first on how water rationing will work after the taps are — yes, literally — turned off by the city: “By late spring, four million people in the city of Cape Town—one of Africa’s most affluent metropolises—may have to stand in line surrounded by armed guards to collect rations of the region’s most precious commodity: drinking water.”

Stand in line surrounded by armed guards to get your daily ration of water? Yes, that’s what water rationing in a city-wide emergency looks like.

The city is prepping 200 emergency water stations outside groceries and other gathering spots. Each would have to serve almost 20,000 residents. Cape Town officials are making plans to store emergency water at military installations, and say using taps to fill pools, water gardens, or wash cars is now illegal. Just this week, authorities stepped up water-theft patrols at natural springs where fights broke out, according to local press reports. They’re being asked to crack down on “unscrupulous traders” who have driven up the price of bottled water.

The amount of rationing will be extreme. In early January, the city asked residents (note, asked) to use just 50 liters of water per day (which, the article notes, is less than one-sixth of what the average American uses). Day Zero will make those restrictions mandatory and reduce the quota to 25 liters per day (“less than typically used in four minutes of showering”).

About those social tensions, city officials are also worried about it. Writes Helen Zille, former Cape Town mayor and premier of South Africa’s Western Cape province, “The question that dominates my waking hours now is: When Day Zero arrives, how do we make water accessible and prevent anarchy?”

The National Geographic article makes that point again: “For months, citizens have been urged to consume less, but more than half of residents ignored those volunteer restrictions.”

Says David Olivier, a research fellow at the Global Change Institute at South Africa’s University of the Witwatersrand, “The fundamental problem is the kind of lifestyle we’re living. There’s almost a sense of entitlement that we have a right to consume as much as we want. The attitude and reaction of most posts on social media is indignation. It’s ‘we pay our taxes’ and therefore we should be as comfortable as possible.”

“A sense of entitlement.” Sound familiar?

Finally, many major cities are in roughly the same shape as Cape Town, are staring down the barrel of the same gun (emphasis added):

[M]any of the 21 million residents of Mexico City only have running water part of the day, while one in five get just a few hours from their taps a week. Several major cities in India don’t have enough. Water managers in Melbourne, Australia, reported last summer that they could run out of water in little more than a decade. Jakarta is running so dry that the city is sinking faster than seas are rising, as residents suck up groundwater from below the surface.

Much like Cape Town’s fiasco, reservoirs in Sao Paulo, Brazil, dropped so low in 2015 that pipes drew in mud, emergency water trucks were looted, and the flow of water to taps in many homes was cut to just a few hours twice a week. Only last-minute rains prevented Brazilian authorities from having to close taps completely.

“Sao Paulo was down to less than 20 days of water supply,” says Betsy Otto, director of the global water program at the World Resources Institute. “What we’re starting to see are the confluence of a lot of factors that might be underappreciated, ignored, or changing. Brought together, though, they create the perfect storm.”

Is it an emergency yet? Is this impetus enough? Is it time yet for people to take matters into their own hands and act?