As we’ve said repeatedly, one of the most troubling things about CalPERS is its institutionalized culture of lying, not just by implication or omission but too often overtly.

Today’s example is the unclear and questionable role that top Silicon Valley law firm and power broker Wilson Sonsini Goodrich & Rosati (“Wilson Sonsini”) is playing in CalPERS’ scheme to outsource private equity. We’ve written at length as to how moving in this direction is the polar opposite to what other major investors are doing, which it to bring more PE activities in house to cut out costly middlemen. CalPERS is instead proposing to add another layer of fees, which will hurt beneficiaries by reducing performance. We discuss in a companion post today how CalPERS is almost certain to suffer in an even bigger way, since its returns are likely to suffer for other reasons, such as some general partners being unwilling to work with a CalPERS outsourcer like BlackRock.

We aren’t the only party that smells the stench of corruption. One long-standing CalPERS insider said:

In all my years of working with the system, I’ve never seen anything that makes my hair stand up on the back of my neck like this. Even though I can’t prove it, my gut says someone will go to jail if this gets done. And my gut has a good track record.

CalPERS first presented the idea of “new private equity business models” at a board offsite last July. At events like this, such as CalPERS 2015 private equity workshop, while the panelists are understood to be talking their own book in a general way, they are presented to the board and public as independent.

That was hardly the case for two of the five show horses, Mark Wiseman of BlackRock and Larry Sonsini of Wilson Sonsini. A month and a half after the board presentation, Bloomberg reported that BlackRock was in negotiations with CalPERS over outsourcing private equity. That was at odds with what the board had been told not just implicitly, that the panelists were there for informational purposes, and not as part of a sales process, but explicitly, since the board had been told the next step would be that they’d be briefed again in about six months. For the talks to be far along enough for Bloomberg to have gotten whiff of them means that they had been underway for some time.

Wilson Sonsini has become even more deeply involved. The firm has been retained by CalPERS and met with the board in closed session in November and is on the agenda for this week’s Investment Committee closed session.

There are several reasons this development is troubling, as we’ll discuss below.

2. Wilson Sonsini can’t be doing legal work at this juncture, since there is no contract to negotiate, but instead must be acting as a business advisor

3. Wilson Sonsini is unlikely to be the best advisor for whatever it us up to now…at least as far as CalPERS beneficiaries are concerned

One of the problems with American legal and commercial norms is the way that various types of potential or actual self-serving behavior have been normalized. For instance, by any common-sense standard, the Washington DC revolving door, in which regulators then go to highly paid jobs in the industry they just supervised, is an invitation to have businesses reward overseers who played nicely with them. If you have any doubt that this happens, just look at how few boards the only mildly tough former SEC Chairman Arthur Levitt was invited to sit on after he left the agency. But under the law, this sort of soft corruption is perfectly OK. Only explicit quid pro quos are deemed to be against the law.

Similarly, law firms define conflicts of interest very narrowly, as in whether a current (or prospective) client has an adverse interest relative to another client. For instance, CalPERS fiduciary counsel, Ashley Dunning, is representing Marin County Employees Retirement Association, defending an appeals court decision before the California Supreme Court that weakens the so-called California Rule. The California Rule prevents employers from reducing pensions unless they provide an equivalent economic benefit. That representation has been construed not to represent a conflict of interest with Dunning serving as CalPERS’ fiduciary counsel, even though CalPERS as an institution supports the California Rule.

Wilson Sonsini positions itself as representing technology companies, typically the cream of the Silicon Valley crop. Though it may technically have its bills paid by those businesses, its real client is often the money behind them, which means the venture capital or sometimes private equity firm funding the company. Let us put it another way: if a venture-or-PE-backed company were to try to hire a law firm over the desires of the VC/PE firm, that plan would not go very far.

Wilson Sonsini is thus in the regular business of effectively representing general partners with which CalPERS does business as well as ones that would like to receive funding from CalPERS. The ten examples below are only a small subset of firms represented by Wilson Sonsini on matters dating from January 1, 20131 where CalPERS also has a relationship with the VC or private equity firm backing the business: 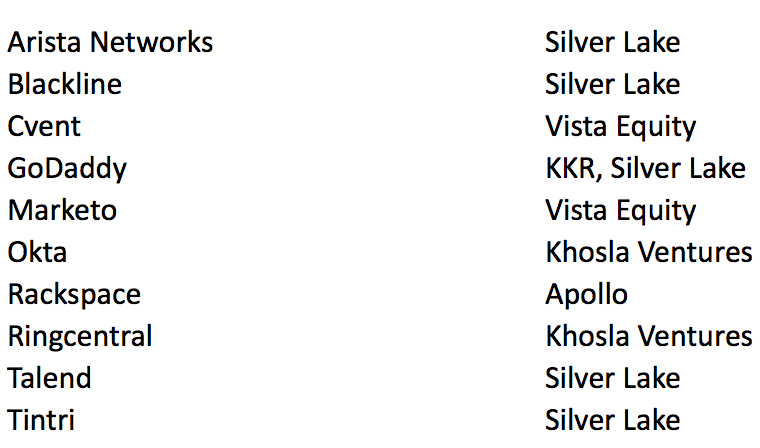 Not only is Wilson Sonsini often representing general partners at a step removed, it is also important to understand that what Wilson Sonsini will generate representing a single portfolio company on an IPO or a sale is a big multiple of what it will make working for CalPERS.

One of the last things the private equity and venture capital communities want to see is more big investors making private company investments on their own, cutting out these high-fee services. Family offices, like the Basses and Och-Ziff, have been at this for decades. Sovereign wealth funds are becoming more and more active direct investors. This is a trend that private equity firms would like to see stopped in its tracks.

Remember how, in 2014, CalPERS exiting hedge funds was front page news? It helped lower the bar to other investors, particularly public pension funds, cutting their exposures, which caught hold in a big way in early 2016. If CalPERS were to take analogous steps in private equity, by committing to do more in house, as we’ve argued it should for years, it would be a similar seismic event.

The reason CalPERS staff was able to hire Wilson Sonsini without going through a request for proposal process is that California agencies don’t have to go that route when hiring attorneys. Indeed, CalPERS staff appeared to set up the rationale for bringing Wilson Sonsini in at the July offsite, when Chief Investment Officer Ted Eliopoulos said that the next step would be to present the board with possible legal structures. A former CalPERS board member said that that did not happen when Wilson Sonsini participated in a closed session meeting in November.

Moreover, it is just about certain that Wilson Sonsini isn’t doing any legal work now. If you read the mislabeled “Request for Information” documents that CalPERS published in December, which we’ve embedded at the end of this post, CalPERS makes clear that the terms setting to be done is of the “tell us how far to bend over” variety, as in will be proposed by the other side. Moreover, the documents are lacking in the spit and polish you’d expect them to have if Wilson Sonsini provided meaningful input.

In other words, any legal work, like negotiation support and review of contract language, has yet to start.

If CalPERS wanted to get independent advice on its private equity strategy, it had plenty of options, including boutique consulting firms and academics.

In light of what Larry Sonsini said at the July offsite, it appears to hired to act as a big name validator of what staff has in mind. While consultants are often criticized for doing just that, it is particularly troubling to have a firm tasked to that role that does not have an economic incentive to do a good job for that client, whether narrowly or broadly defined. And Wilson Sonsisi can’t claim to have any insight into CalPERS investments, particularly in light of CalPERS underfunding.

Wilson Sonsini Appears to Be Influencing CalPERS Already, and Not in a Good Way

Recall our post earlier this month, CalPERS Chief Investment Office Ted Eliopoulos Now Touting Venture Capital Even Though It Can’t Improve Returns. We didn’t realize then that CalPERS had engaged Wilson Sonsini. The fact that Eliopoulos led a panel of three venture capitalists, nominally on innovation, when Eliopoulos was even more fawning than usual and all the guests did was tell war stories, now makes more sense.

Mind you, this is a ludicrous idea. Even competent large public pension funds like CalSTRS whose Chief Investment Officer Chris Ailman has admitted to venture capital lust, do not invest in venture capital because it does not make any sense for a fund that large. Even if they could win at the fool’s errand of trying to be the Warren Buffett of VC investing and out-do their competitors at fund selection, they can’t put enough money to work in venture capital to have a meaningful impact on returns.

Even worse, as we wrote at some length in the post, the strategy that Eliopoulos proposed for venture capital was just about the worst you could devise. Eliopoulos pumped for making late-stage venture investments. With unicorns engaging in what amounts to large-scale valuation fraud, combined with the fact that the funding need right now, and therefore likely much better opportunity is with early state companies, this looks like CalPERS jumping on a fad that is way past its sell-by date.

Finally, while correlation is not causation, Eliopoulos’ tango with BlackRock and Wilson Sonsini has taken place in tandem with particularly visible displays of staff riding roughshod over CalPERS’ board, including:

The staff embarrassing the board by the board repeatedly finding out about major initiatives in the press, such as CalPERS having started negotiating private equity outsourcing with BlackRock in early September, and Eliopoulos announcing his venture capital schemes to the press without having clued in the board

The bait and switch of the board being told in July staff was moving deliberately and the next step would be a briefing, when instead the staff has gone out to start a contracting process without getting board approval

It is really ugly to see CalPERS board being muscled in such an obvious way to make a decision is contrary to beneficiaries’ interest by worsening CalPERS’ returns (see our companion post as to why). There has to be another agenda at work.

1 From SEC filings of public offerings where Wilson Sonsini represented the company owned by funds managed by the general partners listed.