Cow escapes on way to slaughterhouse, smashes through metal fence, breaks arm of man trying to catch her then swims to safety on island in lake Independent. That cow is an inspiration to us all.

Two cheers for the return of volatility John Authers, FT. “It is far from clear that the investment industry any longer has the skills needed to help the markets in the process of price discovery. Bottom-up stockpicking based on crunching the fundamentals of a company balance sheet is a dying art. It has not been such a useful skill for some time.” Hmm.

The playboy who got away with $242m – using ‘black magic’ BBC (Richard Smith).

Waymo Gets the O.K. for a Commercial Driverless Ride-Hailing Service Bloomberg

Turkey denies use of chemicals in Syria’s Afrin, says accusations baseless Reuters (Re Silc). Re Silc: “What would McMaster say? He never lies.” And Public reports ‘clearly show’ Assad’s use of chemical weapons: McMaster Reuters (Re Silc). Re Silc: “Must be the Niger yellow cake scam again. Where is Judith Miller?” Readers, serious question: Is there anybody who does not understand those short-hand references?

May gives credible but uncompelling view on post-Brexit defence FT

There can be no Brexit deal without Tory unity Spectator. Um…

Could Brexit leave us in a French Revolution scenario of having no bread to feed ourselves? Irish Independent

What Could the United States Have Done – If Anything – To Prevent China’s Rise? Foreign Policy

Sorry to be a bit heavy on this topic, but it’s drowning out everything else. I’ve thrown the topics into three buckets: Warmongering, sometimes hysterical; technical/analytical; and critical:

How Russia turned the internet against America Politico

Putin’s chef, a troll farm and Russia’s plot to hijack US democracy Guardian

Foreign Disinformation is a Threat to Military Readiness, Too Defense One. Ka-ching.

1 big thing: We know nothing; Mueller knows all Axios

This Is What $1.25 Million Dollars a Month Bought the Russians Foreign Policy. More than Clinton’s $1.4 billion, it seems. If Democrats really want to win, why don’t they just hire these guys?

How Much Did Russian Interference Affect The 2016 Election? Nate Silver, FiveThirtyEight. The last paragraph is key.

Russiagate or Deep State? What Some Progressives Get Wrong on Russia. Foreign Policy in Focus

Russia Isn’t the Only One Meddling in Elections. We Do It, Too. NYT (Re Silc).

I&#39;m actually surprised I haven&#39;t been indicted. I&#39;m Russian, I was in the U.S. in 2016 and I published columns critical of both Clinton and Trump w/o registering as a foreign agent.

How the New Tax Law Could Slow Disaster Recovery in Small Towns Governing. Things are more like they are now than they ever have been before.

Chronicle of a white supremacist PR crisis and the making of a hoax Media Matters. Normally, I don’t link to Media Matters, but this is the best round-up I could find.

Behind the Explosion in Socialism Among American Teens In These Times YSDSA.

The Fate of the Revolution Jacobin. Tunisia.

A Ruling Over Embedded Tweets Could Change Online Publishing Wired

I am a knife LRB. “As Judith Butler has argued, the performative is always melancholic, since the performer knows the role they are enacting is no more than skin deep (‘melancholic’ also because of all the other buried and unconsciously grieved sexual lives one might have led).” Or political lives, one might add. 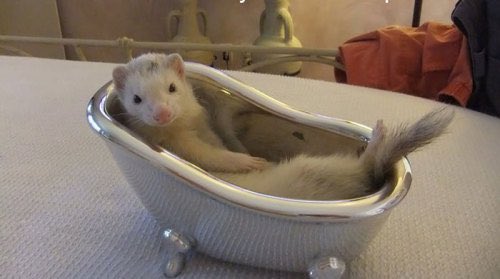 Bonus antidote. Continuing to level up my cat game:

i should've know this was in istanbul