Yves here. One issue with supply-side restrictions is that they are designed to limit use by making fossil fuels more costly and/or scarce. The costs of that will fall most heavily on the poor in the absence of mitigating policies. But then again, so too will the damaging effects of climate change. 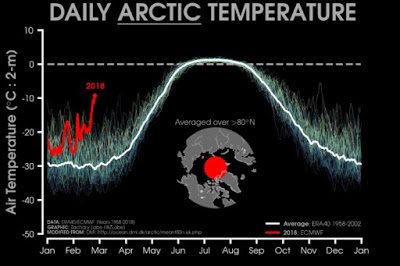 This is a major mistake. It may even prove fatal to the great task ahead. And only the climate activist and policy community can fix this error.

The Argument for Restricting the Supply of Fossil Fuels

1. Note the graph above. If it’s not already clear that global warming has not just reached truly dangerous proportions, but is accelerating, what’s shown in graphs like that should dispel all doubt.

Here’s another, from the same series of tweets by climate writer Bill McKibben:

Hmm, something seems a little different this year when it comes to ice in the Bering Sea pic.twitter.com/RwCayhinmt


The Chukchi Sea is the region of the Arctic north of the Bering Strait. As you can see, the extent of sea ice is declining precipitously. (See also here and here.) All those tiny lines are measurements from the most recent previous years.

(Both of these graphs come from the website of climate scientist and student Zachary Labe, a Ph.D. candidate in the Department of Earth System Science at UC Irvine. The site is rich in graphs like these. For more Arctic sea ice figures, see here and also the links at the bottom of the page.)

If this isn’t an emergency, what is? The World War II analogy would be: Germany has been arming for war for years and has now massed troops on the Polish border. There’s no time to waste in preparing the Polish people for the onslaught.

2. If there’s no time to waste in addressing the climate crisis, it’s necessary not just to restrict the demand for fossil fuels — for example, via carbon taxes and mandatory emissions standards — but also the supply.

This means, in turn, putting the squeeze on the economy to force a conversion to renewable energy supply, rather than simply put pressure on the economy via more gentle restrictions and encouragements that allow the economy to adjust, if it wishes, in a way that’s “comfortable.”

Supply restrictions, in contrast, tend to be uncomfortable — for consumers because supply is restricted in advance of changes in buying behavior or availability of alternatives; for suppliers because the flow of profit is artificially constrained; and for segments of the economy as a whole because money is forced out of fully operating sectors (fossil fuel production, delivery and use) and into alternative, less-developed areas.

The purpose of supply restrictions, in fact, is to use that discomfort to force changes in behavior, to force the development of alternatives — and not to settle for waiting until the market or consumers decide to make these changes on their own.

The World War II analogy would be the transfer of money from the consumer part of the U.S. economy via rationing into the war-making part of the economy, in order to force the production of ships, tanks, guns and other materiel needed by the military. The constricting factor, the reason the U.S. couldn’t support both parts of the economy at full capacity, is manufacturing capacity. No developed nation can double manufacturing capacity in a year, even with all the money in the world to do it. Capacity to make cars, for example, had to be converted to make tanks. In the same way, overall spending had to be diverted, since a nation’s ability to expand government spending, while large, isn’t infinite.

3. Restrictions on supply, when coupled with constrictions on demand, work very well in other areas where public policy intervention is needed to create a positive social change. Consider the attempt to limit tobacco use in Australia, from a recent academic study (“Cutting with both arms of the scissors: the economic and political case for restrictive supply-side climate policies” by Fergus Green & Richard Denniss) that looks at the utility of supply-side restriction in the battle to mitigate climate change (emphasis added):

None of these anti-“free market” measures is considered out of bounds by the public in the war on tobacco use:

Far from being derided as an inefficient mire of “red tape”, Australia’s tobacco regulatory environment is lauded as a global model of effective public health policy, with the country seen as an early mover in innovative regulation in the sector (Chapman and Wakefield 2001). The combination of a wide range of policies, rather than an ‘optimal’ policy, is, moreover, endorsed in the World Health Organisation Framework Convention on Tobacco Control, which states that “‘tobacco control’ means a range of supply, demand and harm reduction strategies that aim to improve the health of a population by eliminating or reducing their consumption of tobacco products and their exposure to tobacco smoke…” (article 1(d)).

4. Restrictions on demand for fossil fuels alone aren’t doing the job, certainly not fast enough. The march to a far less human-friendly climate — what I’ve been calling the Next New Stone Age — is relentless and accelerating. Again, we are now seeing zero degree Celsius days in February in the Arctic. In plain English, that means this: air, warm enough to melt ice, in the Arctic, in winter.

It points out that the economic benefits of supply-side restrictions include low administrative and transaction costs, higher certainty of abatement outcomes, positive price and efficiency effects, the avoidance of infrastructure “lock in,” and others.

On the political side, the authors assert that “supply-side policies are generally likely to attract higher public support than demand-side policies, all else equal.”

Scholars have identified various reasons, related to these factors [perceived benefits, distributional fairness, and so on], why people tend to prefer certain kinds of climate policy instrumentsover others (e.g. command and control regulation over market-based instruments) (Jenkins 2014; Karplus 2011; Rabe 2010) and, within a given class of policy instrument, certain design features(e.g. explicit earmarking of revenue from market-based instruments) (Drews and van den Bergh 2015, 863; Rabe and Borick 2012). What has not been analysed is the effect on public support resulting from whether the instrument targets the supply side or the demand side (controlling for instrument type and relevant design features such as, where applicable, revenue allocation).

The point of the study is to support that point by “controlling for instrument type and relevant design features such as, where applicable, revenue allocation”.

For example, on the “perceived benefits” of demand-side vs. supply-side climate policies, the authors state:

A common conclusion from climate-related public opinion research is that climate science is poorly understood and concern about the problem, though widespread, is shallow, i.e. it tends to be a low-salience, low-priority concern and individuals have a low “willingness to pay” for solutions (Ansolabehere and Konisky 2014; Guber 2003; Jenkins 2014, 470–72; van der Linden et al. 2015). This is unsurprising: the climate benefits of mitigation policies are diffused widely across time and space; they disproportionately accrue (and are perceived accrue) to future generations and people in other countries; and their magnitude is uncertain, meaning they are likely to be strongly discounted by voters (van der Linden et al. 2015).

Supply-side policies suffer none of these disadvantages:

The paper studied similar support for supply-side policies based on perceptions of distributional fairness and lower costs.

6. The bottom line is: This is the first study that controls for other factors in determining support for supply-side climate policies vs. demand-side policies by themselves, and finds much to be encouraged about.

In our experience, the climate policy community has for too long been excessively narrow in its preference for certain kinds of policy instruments (carbon taxes, cap-and trade), largely ignoring the characteristics of such instruments that affect their political feasibility and feedback effects. At the very least, then, we hope we have shown that supply-side policies should be in the toolkit, ready to be wielded when circumstances favour.

Better, we think, to cut with both arms of the scissors.

Cutting with “both arms of the scissors” means using both supply-side policies and demand-side policies in addressing the looming climate crisis. It’s clearly ineffective to use just one.

Only the Climate Policy Community Can Lead in Making This Change

Note the addressee of the authors’ conclusion — the “climate policy community.” This recommendation is not addressed primarily to politicians, who in the West are natively “free market” apologists, which means, natively Big Money enablers.

And it’s not addressed to the public at large, who fear — and are led to fear — the “discomfort” of supply restrictions. Recent American Petroleum Institute ads, for example, say this in effect to consumers: “Do you like that big-screen, smart-phone lifestyle of yours? Be sure to keep carbon in the energy mix, or you’ll lose it.” Yet the reality is, if Mr. and Ms. Consumer truly hope to keep their smart-phone lifestyle intact, they better start now to arrest the devolution to Stone Age life that constantly burning carbon will cause — just the opposite of what the API is telling them to do.

It makes sense then, does it not, that a message that clearly explain the benefits of reduction — and destruction — of fossil fuel supply can only be carried at first by leading climate activists and the broader policy community?

I see no one else to offer it. And considering both the existential nature of the coming emergency and its near-suffocational timeline, that leadership needs to start … well, now.