Yves here. I am sure quite a few readers will find this wrap of economists’ views on political pressures on central banks to be frustrating. There is no acknowledgment of the fact that central bankers at best are cognitively captured by financiers, as a central banker, Willem Buiter, pointed out to much outrage at the 2007 Jackson Hole confab.

Similarly, central banking is now dominated by monetary economists…even though monetarism was decisively shown not to work in practice in experiments run in the Thatcher and Reagan eras.

But most important is that central banks have come to see limiting inflation as a more important part of their job than promoting, or at least not getting in the way of, growth. They have also become unduly active in managing the prices of financial assets (look at the Bank of Japan buying stocks, and the increasingly mainstream belief among US money managers that the Fed intervenes in equity markets). The long-standing Greenspan, then Bernanke, then Yellen put, with central banks around the world embracing similar policies, means the risk of investing in financial assets has been reduced. That results in overinvestment in them and resulting overfinancialization of the economy. We’ve also pointed out that in recent years, more and more studies have found that an overly large banking sector is a negative for growth. Yet central bankers seem mystified that the broad public is more and more unhappy with them.

By Silvia Merler, an Affiliate Fellow at Bruegel. Prior to that, she worked as Economic Analyst in DG Economic and Financial Affairs of the European Commission. Originally published at Bruegel

Two years of elections have shown that we live in an age of increasing political and economic populism. What are the consequences of that for central banks? We explore opinions about it, from both 2017 and more recently.

Charles Goodhart and Rosa Lastra have a new paper out as well as a VoxEU piece on the subject. They argue that the consensus that surrounded the granting of central bank independence in the pursuit of a price-stability-oriented monetary policy has been challenged in the aftermath of the global financial crisis, in the light of the rise of populism on the one hand and the expanded mandates of central banks on the other hand.

After considering the economic case for independence as well as the existence of distributional, directional and duration effects, the paper examines different dimensions in the debate of how the rise in populism – or simply general discontent with the status quo – affects central bank independence. While it is possible – but uncertain – that monetary policy may continue to be independently operated, Goodhart and Lastra argue that there is a possibility that the blurring of independence in the field of financial stability may also raise questions for central banks’ independence more broadly. It is therefore important to have in place adequate mechanisms to ‘guard the guardians’ of monetary and financial stability.

Dani Rodrik writes that while populism in the political domain is almost always harmful, economic populism can sometimes be justified – for example, when it questions the excessive focus of independent central banks on keeping inflation low. Part of today’s populist backlash is rooted in the belief, not entirely unjustified, that delegation to autonomous agencies or signing on to global rules does not serve society, but only a narrow caste of “insiders”. Independent central banks played a critical role in bringing inflation down in the 1980s and 1990s. But in the current low-inflation environment, their exclusive focus on price stability imparts a deflationary bias to economic policy and is in tension with employment generation and growth. Rodrik argues that in such cases, relaxing the constraints on economic policy and returning policy-making autonomy to elected governments may well be desirable.

Douglas J. Elliott from Oliver Wyman highlights some key assumptions of recent decades that may be reversed if we have enter a populist era (Figure below). He believes that financial institutions need to think today about whether they could adapt as necessary. Actions should be taken to re-evaluate strategic planning and stress testing processes to ensure that potential outcomes are not implicitly or explicitly dismissed as impossible. Beyond that, the potential for changes in the environment this large should be a further spur to redesigning firms to be more agile and to clear away the obstacles to good governance, sound data management, optimal financial resource management, and other key tools that will be even more clearly necessary for success. 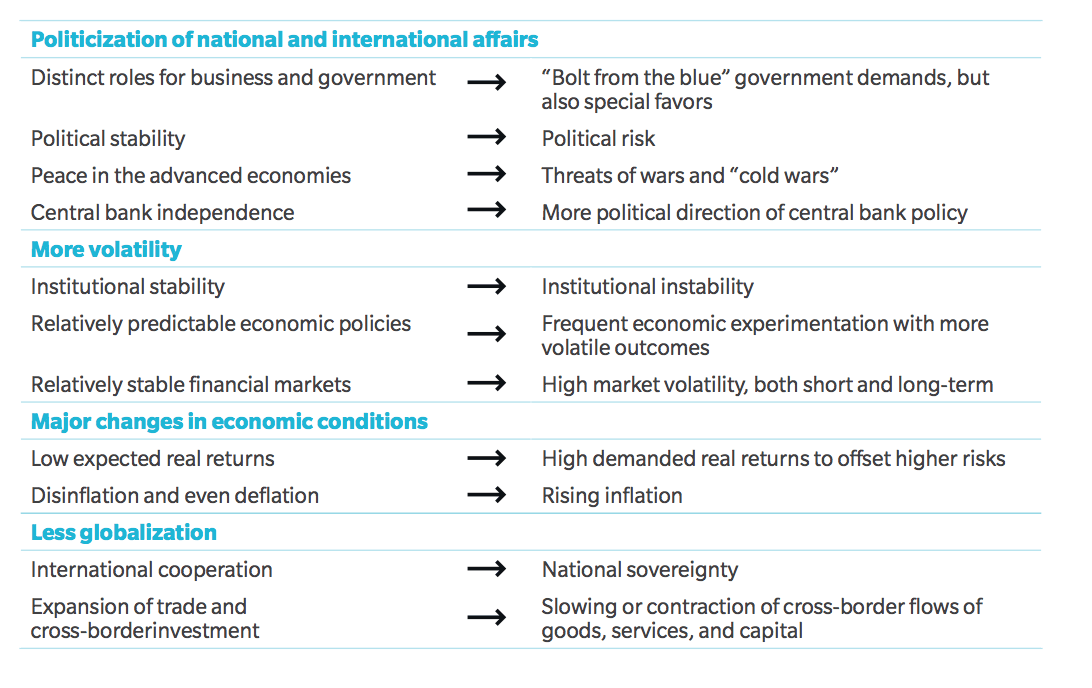 Lucrezia Reichlin argued last year that with populist movements gaining ground, their complaints about independent monetary policymakers could now change the relationship between central banks, treasuries, and legislatures. The diverse range of critiques against central banks come from both the left and the right, and some overlap with concerns voiced by conservative economists that central banks have assumed an excessive role in managing the economy since the 2008 financial crisis. But whereas populists tend to favour limiting central banks’ political and operational independence and broadening their mandate, conservative economists want the opposite.

Reichlin thinks that populist solutions may be ill-advised, but the problems populists have identified with respect to central banks are real. If we believe that central banks should be protected from short-term political interference as they pursue monetary-policy objectives, it behoves us to implement reforms that will allow for democratically accountable coordination among monetary, fiscal, and financial authorities.

Jacqueline Best argues that politics should be brought back to monetary policy. Although technocratic exceptionalism is tempting, especially in the face of the threat of illiberal democracy, it is also quite dangerous, since it reduces accountability even without succeeding in getting the politics out of monetary policy.

This disconnect with the public ultimately fuels the kind of populist backlash the world has recently seen, further politicising monetary policy with potentially very worrying consequences. This is the paradox of monetary credibility: although economic theory says that monetary credibility and low inflation depend on getting the politics out, at the end of the day – in a democratic society – credibility also depends on the legitimacy of the monetary system and its institutions to deliver policies that work.

Edward Hadas argues that monetary chiefs cling to a dangerously simplistic model of reality and they need a humbler and more realistic approach. As yet, that revolt has not gone far, although Narendra Modi, the populist Indian prime minister, ignored the Reserve Bank of India when he unexpectedly withdrew all high-value banknotes from circulation. But Hadas argues that central bankers elsewhere should not rest easy; their political position is fragile, due to the fact that after failing to forestall a global crisis in 2008 they have presided over almost a decade of mediocre economic growth.

Part of the problem, Hadas argues, is that monetary authorities are fixated on controlling the rate of consumer price inflation (CPI) and they claim to be apolitical and above the financial fray. But these too-simple ideas don’t produce good policies. The monetary authorities should, according to Hadas, abandon their fantasies, beg for multiple goals, including limited asset-price volatility, a healthy financial system, fair foreign exchange rates, strong economic growth and steady job creation, while welcoming closer political supervision.