Yves here. I am cross posting this article because it is the sort of thing that will infuriate many readers for valid reasons. It contains some good information but then connects the dots in ways that reveal assumptions about how things work which are increasingly not operative.

The premise of the article is that Millennials “ought” to be saving more for retirement and are spending way too much. First, paying down loans is a form of saving, and the article gives no credit whatsoever for that. Second, some of the factoids are missing key context. For instance, quel horreur, half say they spend more on nights out that on their mortgage or rent! How profligate!

Now consider: 1/3 of Millennials live with their parents and presumably pay no or only token rent. So that means that only 1/6 are spending more on their nightlife than on what most people would think of when they think of housing costs. Now how many of those might be in high income cohorts, have rich parents (so they know they are getting an inheritance and don’t need to put away as much) or are making dating a priority because they want to get married and plan to cut back once they’ve found a spouse?

Or consider the supposedly damning factoid that “Half of Millennials have made unplanned purchases because of something they’ve seen on social media.” Help me. This means nothing if you don’t know the amounts involved. So someone heard about a new bakery and bought a muffin as a result? And we are supposed to get bent out of shape about that? Moreover, there’s no baseline. How much to older people buy in response to good old fashioned ads? Are social media somehow more magically powerful than Madison Avenue? Another factor that could lead to mistaken inferences is that young people may more candid about their (gasp) “unplanned spending” than older folks.

And the article pointedly ignores the elephant in the room…high unemployment rates and poor earnings among the young, particularly among the college educated who had the misfortune to graduate during or shortly after the financial crisis. Why are so many living at home? Why have so few bought houses? Aside from the high-fliers who land in fast track jobs in Silicon Valley, finance, or increasingly, the Beltway, Millennials face short job tenures and not much reason to expect their incomes to get a lot better down the road.

And recall that many of the basics are much more costly in real income terms than they used to be. A reader who bought his first car in the 19§0s pointed out how it took not all that many weeks for an average earner to buy a Volkswagen Beatle outright. Cars and housing are much more pricey in real income terms than they were when people who were born in the 1940s and 1950s were young. Even if you want or need to live modestly, the cheap options are pretty much non-existant if you can’t or won’t live with your folks or in your car. It follows that if you have trouble making ends meet, you won’t be in a position to save beyond at best a minimal buffer for emergencies.

The article also fails to acknowledge that the idea of investing for retirement looks like a sucker’s game when super low interest rates have driven pretty much every financial asset into bubble territory. And the article makes the further and not unreasonable point (without putting it in quite so stark terms) that Millennials doubt the current system will be intact when they get to what would be retirement age. We are in the midst of global warming, which is already producing social and economic dislocation, and a mass extinciton event. Worrying about investments seems like sticking one’s head in the sand when the Jackpot is coming….

By Michael Scott, a news editor for Safehaven.com and Oilprice.com. Originally published at SafeHaven

Fear of Missing Out (FOMO) is a huge part of the Millennial psyche. But while that extends to everything that goes down on social media, this generation doesn’t seem to be worried about missing out on retirement funds.

Millennials—or Generation Y—are today’s late teens and twenty-somethings born in the 80s and 90s, and they number some 80 million people in the United States.

And because FOMO is the Millennial common denominator, the financial detours are numerous.

Thanks to the meteoric rise of social media advertising, Millennials have endless options for spending money, and they account for an estimated $1.3 trillion in annual consumer spending.

Half of Millennials have made unplanned purchases because of something they’ve seen on social media.

And half claim they spend more money on nights out than they do on rent or mortgage payments.

Some studies even suggest that nearly 70 percent of millennials experienceFOMO when they can’t attend something that their family or friends are attending.

FOMO rules their days and nights, but so does an apparent gut feeling that the world won’t exist in its present form by the time they retire.

According to the National Institute on Retirement Security, some 66 percent of Americans between the ages of 21 and 32 have nothing saved for retirement. 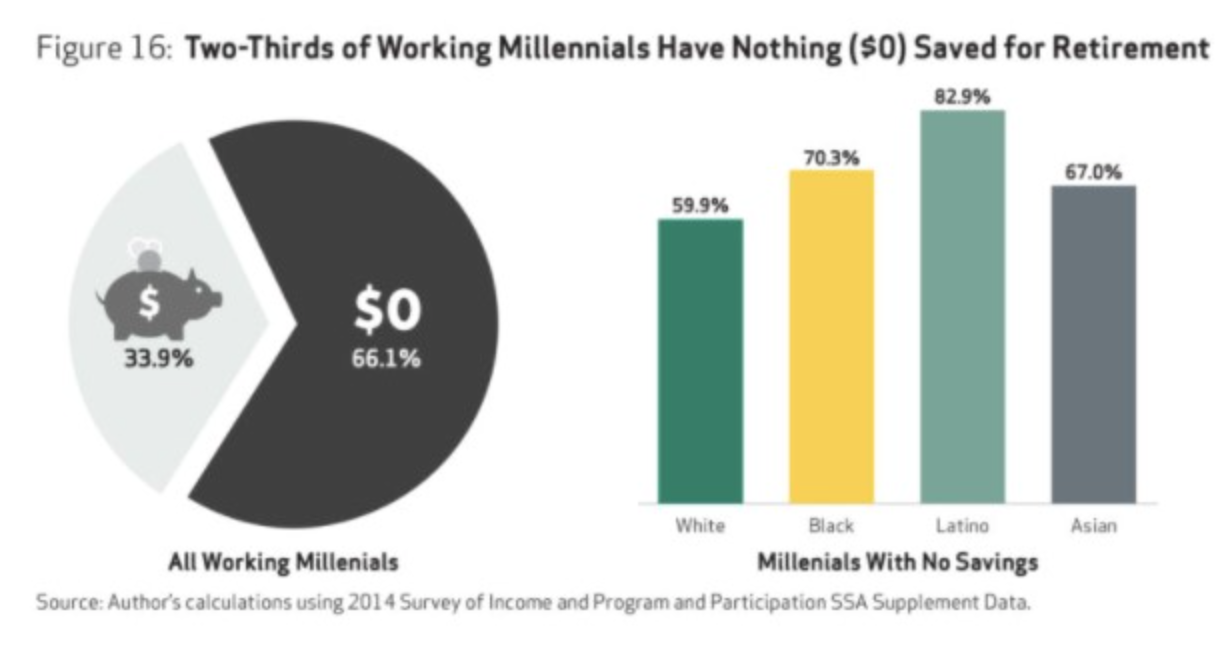 It also suggests that 95 percent of Millennials aren’t saving enough for retirement, and just over one-third participate in employer-sponsored retirement plans.

“This means Millennials must save significantly more than previous generations to maintain their standard of living in retirement,” the report says.

The March 2018 report is based on 2014 census data, so we’ll give it a wide berth, but if even 50 percent of the people that fall into this age group have zero saved up for retirement, the country might look like a very different place in 40 years.

But that’s exactly what Millennials are counting on.

Because they see limited economic prospects that prevent them from saving, they’re banking on social change. Or, as Salon put it: “Some Millennials aren’t saving for retirement because they don’t think capitalism will exist by then.”

It’s not a crazy notion for a generation that lives in poverty more than any other. A Pew Research poll from last September noted that “5.3 million of the nearly 17 million U.S. households living in poverty were headed by a Millennial”. 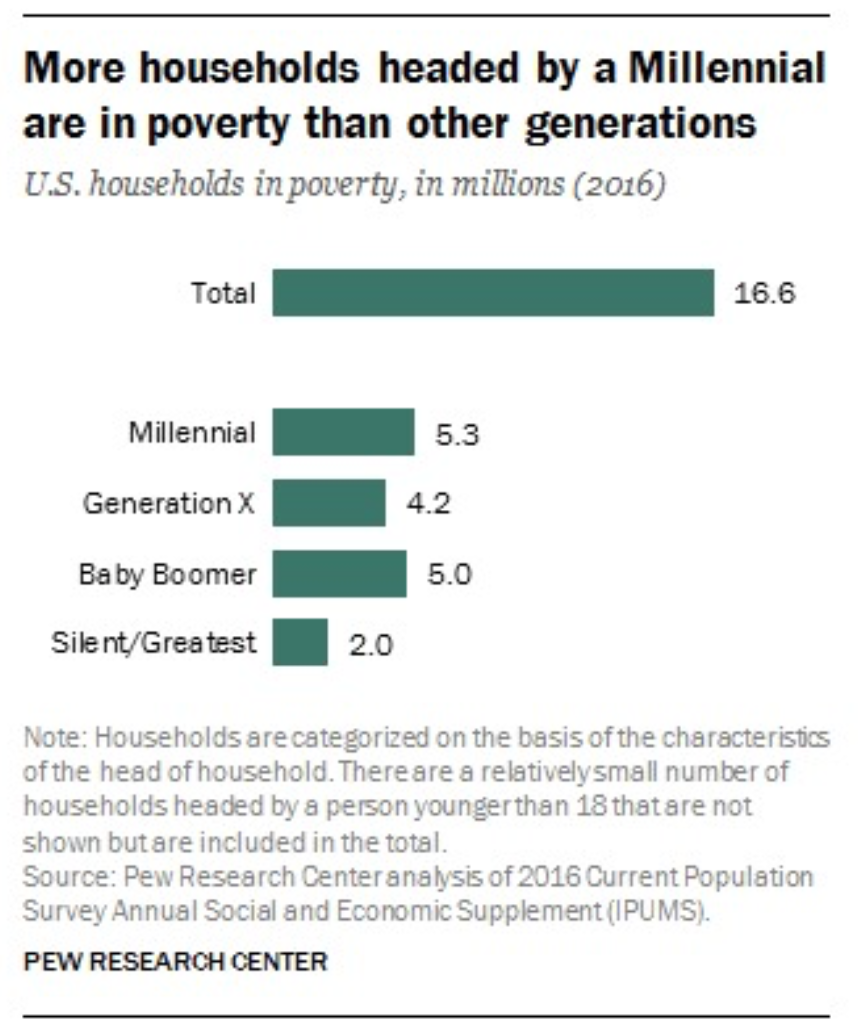 Millennial finances took a hit in the 2008/2009 financial crisis, and the high costs of education have also taken a toll.

According to a recent Bank of America survey, 16 percent now have savings of $100,000 or more, double the amount of young people who had saved that much in 2015.

But the bank warns us against thinking that Millennials are just bad with money: “Despite stereotypes of Millennials as being foolish with money and not long-term planners, they are actually behaving quite responsibly when it comes to money,” the report said.

Millennials aren’t as convinced that the status quo will remain unchanged in the, and they appear less inclined to make long-term decisions. And it’s not just because of the instant gratification habit honed by social media. Millennials see a world soon to be dominated by artificial intelligence—for better or worse— and a higher potential for instability and social change.

It’s not simply frivolous short-term thinking. They may see retirement funds as at risk either way. If the world gets darker, Millennials might end up being more self-sufficient.