Yves here. We’ve generally relegated the political fight over guns to Links, but we thought we’d make an exception, since this post provides some on-the-ground observations. However, notice that the author mentions in passing that he was briefly in jail for protesting the Vietnam War. As readers well know, one of the big impediments to activism now is the pervasiveness of background checks. An arrest record, even for something that should be regarded as praiseworthy, or at worst minor, is now a scarlet letter in the eyes of most employers.

By Dr. Shepherd Bliss {3sb@comcast.net), a retired college teacher and farmer who has contributed to 24 books 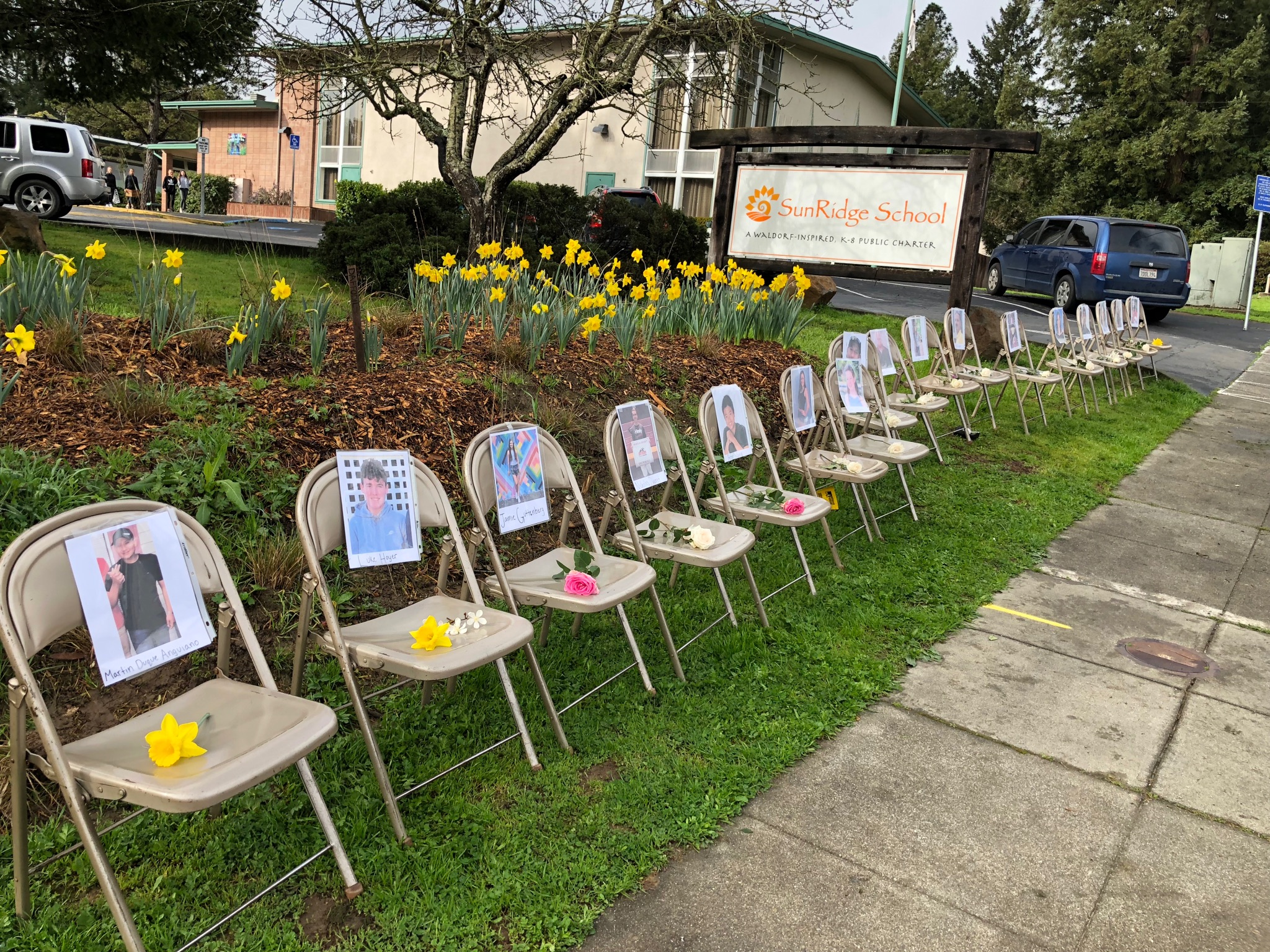 Memorial from a local school in Sebastopol. Photographer: Bill Shortridge

Driving through small-town Sebastopol on March 14 toward the Senior Center, this 73-year-old noticed groups of young students with signs gathering on downtown street corners and waving to motorists. These active participants in direct democracy joined thousands who walked out of schools across the U.S. and the world, organized by the Women’s March Youth branch.

As I got closer to the students, a variety of feelings, thoughts, and memories emerged. Tears of appreciation began to drip from my eyes, as I learned why they were protesting.

Then I smiled at them and flashed the peace sign, as I used to during the active 1960s. I eventually resigned my U.S. Army officer’s commission to join the marches that finally helped ended the American wars on the people of Vietnam, Cambodia, and Laos. Spending a short time in jail, before being released–since I was merely expressing my First Amendment freedom of speech–was worth it.

I’m proud of our middle and high school students, as well as others, for non-violently standing up to defend their generation against those who continue to shoot innocent youth and others in Florida and elsewhere. “Lives matter more than guns. Enough is enough!” were among the signs.

Many teachers and administrators supported students wanting to join the brief marches. California Rep. Mike Thompson created a video, which schools are showing, where he encourages students to “stand up and speak out” against gun violence.

Each event had its own character. The Sebastopol rallies were relatively dignified and many protestors had taped their mouths. All corners of Santa Rosa High, in contrast, were full of students waving signs, chanting, and expressing a call to action and a show of force.

An estimated 500 students, about a quarter of Santa Rosa High’s student body, joined the walkout. In nearby Petaluma around 2000 students from a dozen schools walked out. Some wore bright orange #Never Again shirts, a prominent hash-tag, according to the daily Press Democrat.

Nearly all of the 1300 students at Sonoma Valley High School gathered with signs such as “I should be writing my term paper instead of my will” and “Never Again!” Some waved the American flag and shouted things such as “It’s time for the next generation to take over!”

My feelings eventually ranged from a mixture of sadness—because these students needed to protest—to appreciation for their bravery against those who threaten the Earth’s future.

“Too Young to Protest? 10-Year-Olds Beg to Differ” headlined a March 14 New York Times article. “It started last month as a writing exercise on the 1963 Birmingham Children’s Crusade, when more than 1000 students skipped school and marched to demand civil rights,” the article began. So the current marches have also been a history classroom.

“The classroom assignment mushroomed into a plan—hatched by 10-and-11-year-olds—to stage a little civil disobedience of their own,”the article notes.

“We Won’t Let the N.R.A. Win” headlines another Times article, written by three New Jersey high school students. “The killings of 17 people at Marjory Stoneman Douglas High School in Florida may be the massacre that finally gets federal and state governments to enact common-sense gun control laws,” the students commence their article.

17 is the number of students and staff killed at the Florida school. Many of the events were scheduled for 17 minutes.

“March for Our Lives is not just one day,” the students conclude. “We must all stand with Stoneman Douglas students and say, ‘Never again.’ This isn’t about being aligned with one political party or another. This is about protecting this nation’s children.”

The American Civil Liberties Union helped train some students in their direct actions. The creation of a sense of community was among the marches’ goals.

Meanwhile, a series of violent threats have been scrawled on campuses, including at Santa Rosa High in Northern California.

“We are the future of this country, yet we can no longer assume we are safe from mass shootings in our schools. Nor can we assume our elders will protect us,” the students write.

When I arrived at the Sebastopol Area Senior Center, I spoke with other elders about the issues these youth raise. We agreed that we should support their leadership and join these brave “first responders.”

“Eloquent young voices, equipped with symbolism and social media savvy, riding a resolve as yet untouched by cynicism,” is how the New York Times described the rallies.

“Hey-hey, ho-ho, the N.R.A. has to go,” students chanted as they marched to the D. C. Capital steps. They were met by members of Congress, the most popular of whom seemed to be Sen. Bernie Sanders.

Stay tuned for at least two more nationwide protests on March 24 and April 20, the anniversary of the Columbine murders, as students continue to gather steam and define their movement.