Bill Mitchell has a short (for him), deadly post on what a bust QE has been in Japan.

We’ve pointed out that the Fed’s retreat from QE appears to be due at least in part to the fact that the central bank recognizes belatedly that it didn’t achieve its intended aim of stimulating the real economy. On one level, the Fed sorta knew that, since monetary stimulus does not lead to more demand in the economy. Only more fiscal spending, aka deficits, will do that.

What QE can do is provide a wealth effect, which will lead consumers to spend more. But the wealth effect works to a degree with housing wealth, and not much with financial assets. Moreover, the people who will spend more are people who already by definition have assets. They already have a weaker propensity to marginal spending than less well off people, so the wealth effect is at best an inefficient way to try to induce more expenditures. And those rich people could engage in spending that does little or nothing in the way of adding to GNP, like going on vacation abroad or buying collectables (as in pushing other asset prices up).

And on top of that, by lowering long-term bond yields, QE reduced income to savers such as retirees, since as their older bonds matured, they could replace them only with lower-income-producing assets. Ed Kane of Boston University estimated the cost of super low interest rate policies (which admittedly consists of more than just QE) lowered income to savers in the US by $300 billion a year. So even though goosing housing prices via lowering mortgage interest spreads (an explicit aim of QE in the US, and there was probably also more net spending as a result of mortgage refinancings lowering costs homeowners) may indeed have produced more spending, it was offset by the reduction in interest income for all savers.

Even worse, economists who ought to know better, particularly monetary economists like Ben Bernanke, believe in the loanable funds theory. In layperson terms, that’s the notion that banks lend from pre-exisitng savings. Keynes and then later Nicholas Kaldor disproved it; there’s also plenty of empirical work that show that lending precedes savings, and the MMT proof of that is to work through T accounts and show how loans create deposits. The Bank of England has not only confirmed the view, but thought it important enough to put out a primer for the general public as well as a video.

However, if you believe that loanable funds bollock, you believe related silly ideas, namely, that if you put money on sale, businesses will borrow and run out and expand. Any prudent businessman will tell you that they add to their overheads (which is what “expanding” amounts to) only if they see enough potential profit to justify taking on the additional risk. The cost of money can constrain going into new markets, but making money cheap won’t lead entrepreneurs to launch a thousand new ventures. The exception? In businesses where the cost of money is the one of the biggest cost of the product or service….such as for leveraged speculators.

Mitchell works through how Japan, which engaged in QE in a more spectacular manner than anywhere else, demonstrated that it doesn’t work. As an aside, Mitchell also dismisses the scaremongering over QE, that it will bankrupt the central bank (which is not possible in this scenario; a central bank can always pay any obligation in its own currency) or that terrible things will happen when the central bank undoes QE (which Mitchell points out is nonsensical; the central bank does not have to do anything; it can let the bonds it bought mature or continue buying bonds to keep its balance sheet at the same size if it so chooses).

In Japan, the central bank pursued QE to increase inflationary expectations, with the hope that that would then induce Japanese citizens, who are remarkable savers, to start spending more. Frankly, having lived through the later 1970s, when inflation actually was high enough to induce people to spend sooner if they had spare cash, the idea that lowering interest rates could be thought of as creating inflationary expectations was bonkers. That’s sending a loud and clear deflationary signal. What is the smart stance in deflation? Hold cash, cash equivalents, and high quality bonds. You hold back on spending because things may/will be cheaper later.

I suggest you read Mitchell’s post in full. Key bits:

On April 20, 1018, the IMF presented its – Asia and Pacfic Department Press Briefing – in conjunction with the release of the April 2018 World Economic Outlook and the upcoming (May 9, 2018) release of its Asia and Pacific Regional Economy Outlook. The Deputy Director of the Asia and Pacific Department, one Odd Per Brekk, told the audience that Japan should continue its Quantitative Easing (QE) program and maintain transparency in its purchase volumes so as to ensure the strategy to accelerate the inflation rate up to the 2 per cent target is achieved….

In other words, the IMF was urging the Bank of Japan to continue to maintain its huge “monetary stimulus” in order to increase the inflation rate, which is languishing at around half the Bank’s stated target…

Why this particular statistic matters is beyond me but apparently the “critics” think it matters.

The point of this blog post is to emphasise that it doesn’t matter one iota and that it rapid acceleration since the Bank of Japan started buying JGBs in large volumes in order to increase the inflation rate demonstrates how ineffective monetary policy is in influencing the path of the inflation rate, despite the massive increase in central bank assets…

One could argue that the reversal of QE1 revealed a lack of commitment by the BOJ to really drive the inflation rate up. My assessment is that QE doesn’t work whether it is extended for lengthy periods or not.

The reversal that followed the introduction of QE2 just reduced the monetary base (and the total assets held by the BOJ). 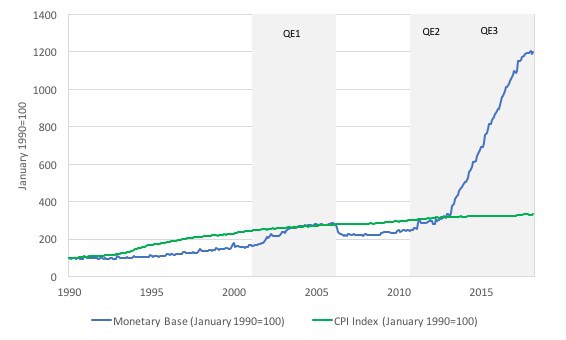 The latest data on inflation expectations is also indicative that the QE policies are not having the desired effect…..

The following graph is taken from the – Tankan Summary of “Inflation Outlook of Enterprises – the latest data being released on April 2, 2018, covering expectations up to March 2018.

Firms are asked to assess the future price movements in output prices and consumer prices.

The first graph shows the outlook for output prices – 1-year ahead, 3-years ahead and 5-years ahead.

While the expectations have risen in recent months, that is more the result of increased output growth. In the early periods of QE3, the expected inflation rate for output prices fell sharply. 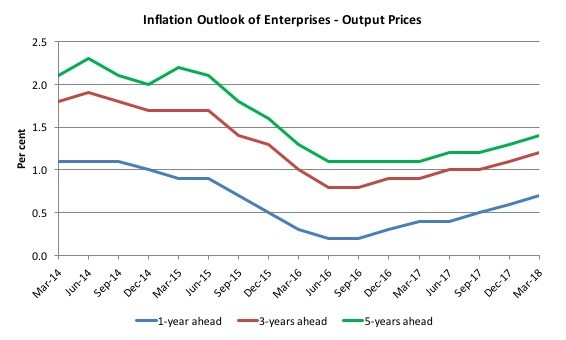 The second graph shows the outlook for consumer prices – 1-year ahead, 3-years ahead and 5-years ahead. It also includes the actual inflation rate (Purple line).

Again it is hard to see any substantial movement in consumer price expectations. 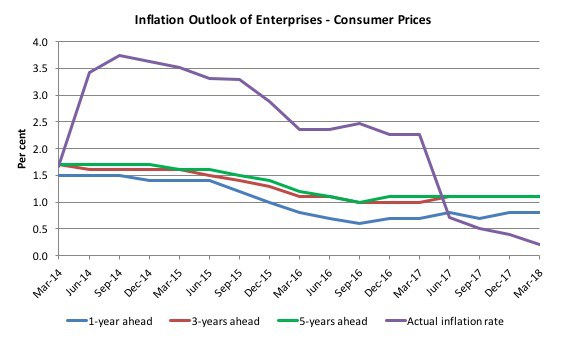 Bill Mitchell should pat himself on the back and conclude, “QED.”