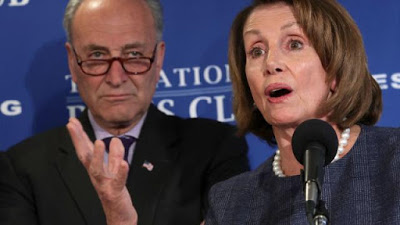 “With no emerging leaders, no clear message, Democrats flounder,” says the headline (source). The headline is false. These Democratic leaders are firmly in charge.

Thomas Frank, author of the widely acclaimed book Listen, Liberal — widely acclaimed at least among the insurgent, anti-corporate wing of the Democratic Party — recently published a long article in Harpersdemonstrating that Donald Trump could well be reelected president in 2020. His reasons include the effect of economic prosperity as an offset to moral repugnance (see Bill Clinton in 1996) and Trump’s still high (and increasing) popularity among his supporters.

As Howie pointed out recently, “If he’s not king of America, he is king of the GOP.” The implications of this are huge, as we watch the Mueller take-down operation turn the screws on Trump’s money operation. On that, more later.

Democrats Can Elect the Next Fake-Populist Republican

One of the offshoots of Frank’s thesis is that Democrats are quite likely to bring about this outcome — Trump’s reelection — themselves. Here’s the short version of this argument, from a follow-up interviewwith Thomas Frank by Jon Wiener and published in The Nation:

JW: Okay, what about Mueller saving us?

TF: Every Democrat that I talked to is counting on Mueller to deliver the midterms for them. This has worked for Democrats before. The famous Watergate class in Congress in 1974 was entirely the doing of Richard Nixon and the Watergate scandal, and the Democrats are basically expecting that to happen again. It looks like it will work.

JW: What’s wrong with that?

TF: It breeds a kind of passiveness among Democrats where they never have to think about their own message.

That’s probably enough in itself to make the point clear. Since Trump’s election, Democrats have only once concerned themselves with revising their message — their early, ill-fated, short-lived, badly-received PR effort known as the “Better Deal,” with “better jobs” and so forth. This was especially rich after spending all of the previous two years laughing off Sanders’ actual populism as impractical.

The Better Deal campaign died almost the day it was born, and Democrats today are doing nothing to revisit and learn from the failure of 2016, other than continue to announce in every conceivable way their 2016 theme, “We’re not him.”

And lest you think the failure of 2016 should be counted successful thanks to the popular vote, consider: The Party turned a blowout into a squeaker, by rejecting a populist candidate who filled football stadiums in favor of an Establishment candidate who couldn’t fill a gymnasium — in a change-year election. 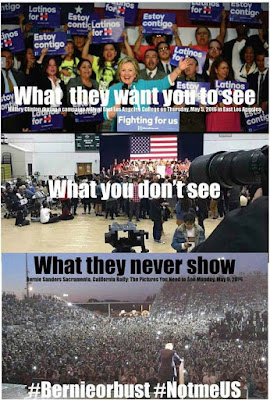 They [Democrats] may succeed in the coming midterms, but that’s a recipe for disaster in the long term. If Trump is not running for reelection three years from now, there’s going to be another Trump. The Republicans are never going to retreat from what this guy showed them in 2016. They now understand how you beat the Democrats. The next Trump is not going to be so vulgar, he’s not going to have affairs with porn stars, he’s not going to pick fights with NFL players. So the Democrats have to be thinking bigger. They can’t think “Oh, he screwed up. Great! Now we get back in.”

Frank believes Republicans now understand how to beat Democrats. The method is to run alongside the crowd that wants to overturn the Establishment — in both parties — and not against it. All they need do is find a candidate who will keep the base of Trump voters intact and attract enough independents who are both left-leaning and hate what the Democratic Party has become. In other words, all they need do is run a pro-change-appearing populist with a toned-down hint of the taint of Trumpian vulgarity — just enough to attract, not enough to repel.

If they offer such a candidate, and the Democrats offer a their own pro-change-appearing candidate (for example, Cory Booker or Kamala Harris), the remaining left-leaning, betrayal-remembering independents will likely stay home. After that, it’s anyone’s call who wins. And God forbid the Democrats offer a likeable hack like Biden, or anyone else with his history of obvious subservience to money and power. It’s over then for sure.

How Democrats Can Win With a Mandate

So how can the Democratic Party claim victory from the jaws of opportunity in 2020? By offering an actual change candidate of their own to run against the Republican fake. By running alongside the crowd that still wants to overturn the Establishment, and not against it. By offering someone real for change voters to vote for.

By offering, in other words, the 2020 version of Bernie Sanders.

JW: How can we defeat this phenomenon once and for all? Don’t we need a progressive like a Bernie Sanders who would raise the minimum wage, make college tuition-free, bring Medicare for all—and actually make life better for ordinary middle- and working-class people?

TF: Yes. I don’t want to put any proper names on it, like a certain senator from Vermont, but the bottom line is this: If the economy booms and wages go up, it’s going to be hard to beat Trump in three years. The Democrats cannot stick with the Clinton and Obama approach where you identify yourself with what I like to call the ideology of the 1990s, the “catechism of tech, bank, and globe,” as I say in the article. There’s really only one set of successful politics for an age like this one: It’s the politics that we identify with the party of Lyndon Johnson, the party of the New Deal. What Trump has offered is a kind of weird replica of that. But as I have said many times, the real thing would beat the fake.

“The real thing would beat the fake.” In 2016 Republicans offered a fake populist, and the Democrats offered a fake Republican. In that contest of fakes, the populist won … barely. The first party to offer a real populist to the same electorate will sweep into office with a mandate.

Will Democratic Party actually offer such a candidate, offer the “next Sanders” or even the last one, to 2020 voters? Not as currently led.