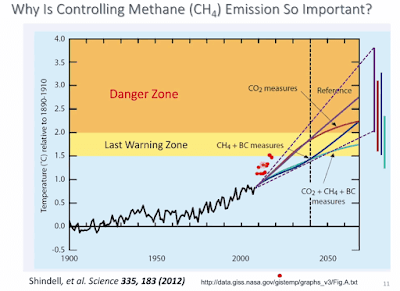 From this video. The original graph contained global warming data through 2010 and predictions after that. The video author added the red dots, which show actual global warming data for 2011–2017. Note that the red dots are not just above all of the scenarios, including the “reference” or “no countermeasures” scenario. They’re also above the 5%–95% band of uncertainty around the reference scenario. In other words, in 2010 the authors of the study considered each recorded data point from 2011 to 2017 to be “highly unlikely” at the time the study was published, each one in the 5% least likely of outcomes.

It’s worth looking at two recent pieces from the climate front, not for what they say as their main points, but for two smaller points buried within them.

Two Degrees Warming Is a Ceiling, Not a Target

The first piece is by Jeffrey Sachs, writing in Canada’s Globe and Mail. His main argument is that Canada should abandon its plans to build pipelines to carry doomed Alberta tar sands to market and build out a smart energy grid connected to the U.S. energy grid to leverage and store  both nation’s renewable power capabilities.

About that, Sachs writes:

Oil seems to make politicians lose their bearings. The get-rich-quick mentality or too-much-to-lose thinking is very hard to overcome. Thus, two of Canada’s most progressive leaders, Prime Minister Justin Trudeau and Alberta Premier Rachel Notley, have both doubled down recently on Alberta oil sands and the pipelines to carry them to world markets. Whether Kinder Morgan’s controversial Trans Mountain expansion through British Columbia is built, or the company steps away from the project, remains uncertain. Either way, the truth is that Alberta oil sands have absolutely no place in a climate-safe world. Investing in them is almost surely to be investing in a future bankruptcy. […]

One impulse wants to say to Kinder Morgan and TransCanada, “Okay, build the pipelines. Then we will bankrupt you.” But admirers and friends of Canada should speak honestly to friends. “Don’t waste your hard-earned money on the Trans Mountain and Keystone XL pipelines. Spend your money on sustainable projects tapping Canada’s abundant zero-carbon energy.”

Why is bankruptcy of these pipeline projects inevitable? In the long term, global warming will destroy all investment in fossil fuels (or it will destroy us, I hasten to add). But in the short term, it’s simple economics (my emphasis throughout):

The world already has vastly more proven reserves of oil and gas than it can safely burn, and a glut of reserves at far lower production costs than Alberta’s oil sands. The marginal costs of the oil sands are typically estimated to be around US$60 per barrel, yet the world will find itself awash in US$30-per-barrel oil as world demand is cut back in the future. There is no way that Alberta’s oil will maintain a profitable niche in a world that is ending its dependence on oil.

“Marginal cost” is the cost of producing additional oil after all needed infrastructure is in place. It’s the cost of producing “the next barrel” in an ongoing operation. Clearly, $30 oil trumps $60 oil as energy producers chase each other in a desperate attempt to monetize as much of this doomed asset as they can.

Sachs points out that Canada is already a world leader in energy production from renewable sources: “The share of renewables in Canada’s power generation is already among the highest in the world, exceeded only by Norway, New Zealand, Brazil, and Austria, and roughly the same as Denmark. Yet far more is possible.”

All good to know. Yet in that piece is this disturbing data point:

Even with the amount of global warming to date (1.1 degrees C above the preindustrial average temperature), the world is experiencing record hot temperatures, devastating heat waves, droughts, extreme floods, and increasingly frequent high-intensity storms and hurricanes. Climate attribution science links these extreme events to human-induced warming. With two degrees or more of warming, the world could well experience a devastating rise in the ocean level, as well as devastating losses and dislocations from crop failures, temperature-linked diseases, invasive species, forest fires, and mega-storms.

Ignore that Sachs’ description of where global warming, as measured by atmospheric surface temperature, is today. “1.1 degrees C above the preindustrial average temperature” is way too low an estimation, as I and others have pointed out many times before. See “Global Warming Has Reached Nearly +1.5°C Already,” or look at slides 2 and 3 here. 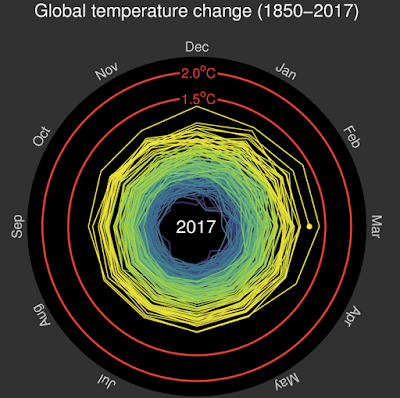 Slide 3 from this presentation showing global warming since 1850 relative to an 1850–1900 baseline. Slide 2 shows the same data as an animated GIF.

Concentrate instead on Sachs’ description of a world with two degrees or more of warming: devastating sea level rise; devastating losses from famine, disease, fire and storms. He missed or under-emphasized other catastrophic effects, like economic collapses, the mass migrations we’re already starting to see, and the endless wars they will inevitably cause (which we’re also already starting to see).

In other words, two degrees of warming isn’t a floor for our aspirations (“we hope to stay below two degrees warming”), but a ceiling for our safety (“above two degrees is a world of hurt”).

Two Degrees Warming Is Less than a Decade Away

Which leads to the second piece I want to look at, one by Sharon Kelly at DeSmogBlog. It argues, quite effectively, that the “fracked gas” boom — oil and gas extraction from shale formations — took us down a deeply destructive path, not just because it revitalized a dying industry, but because it simultaneously tragically hobbled development of desperately needed renewable energy sources.

To see that point graphically, click to enlarge the two charts below and note what happened in each around 2008, or watch this brief video from the article for the fuller explanation. 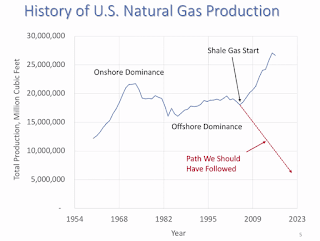 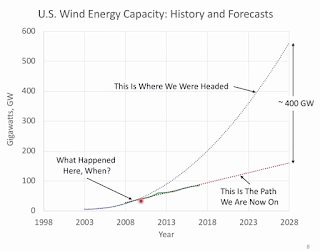 What important for this discussion, though, is this (h/t Naked Capitalism for the find):

The most recent climate data suggests that the world is on track to cross the two degrees of warming threshold set in the Paris accord in just 10 to 15 years, says [Dr. Anthony Ingraffea, Professor of Engineering Emeritus at Cornell University] in a 13-minute lecture titled “Shale Gas: The Technological Gamble That Should Not Have Been Taken,” which was posted online on April 4.

That’s if American energy policy follows the track predicted by the U.S. Energy Information Administration, which expects 1 million natural gas wells will be producing gas in the U.S. in 2050, up from roughly 100,000 today.

As drastic as that sounds, crossing the “two degree warming threshold” in “just 10 to 15 years” underestimates the problem by nearly a factor of two. Two degrees warming is more likely to come in less than a decade, perhaps a lot less.

First, note again that his pre-Industrial baseline is likely too high. The world is closer today to +1.3 or +1.4°C warming than it is to +1.1°C if the actual lows of the pre-Industrial period are considered or accounted for. Dr. Michael Mann’s recalculated baseline puts the warming number at +1.2°C as of 2015, and we’ve seen a burst of warming since. My baseline is a bit lower than his, which means I put “current warming” even higher.

Second, consider the acceleration that no model has successfully predicted. Everything is happening faster than anyone predicted. Click the link in the previous sentence to see a selection of the numerous articles making that point. Among them you’ll find this:

New research provides strong evidence that one of the long-predicted worst-case impacts of climate change — a severe slow-down of the Gulf Stream system — has already started.

“I think we’re close to a tipping point,” climatologist Michael Mann told ThinkProgress in an email. The AMOC slow down “is without precedent” in more than a millennium he said, adding, “It’s happening about a century ahead of schedule relative to what the models predict.”

“A century ahead of schedule” is your takeaway. Everything in the global warming news is “ahead of schedule” — much of it by a lot. Dr. Ingraffea makes the same point starting at 8:30 in the video. Every scenario in the 2010 paper he discusses, including the “reference” (no intervention) scenario, entirely underestimated what would happen in just the next eight years.

And not by a little — by a lot. The key graph is reproduced at the top. The original graph from the paper contained global warming data through 2010 and predictions after that. Dr. Ingraffea added the red dots in the modified graph above to show global warming data for 2011–2017. The red dots are not just above all of the predictions, including the “reference” scenario. They’re above the band of uncertainty around the reference predictions — each one outside the range of outcomes that the models predict are the 95% most certain.

Put another way, the model predicted that each one of the actual 2011–2017 results were less than 5% likely to happen. Each one.

Yet here we are, with “very unlikely” warming staring us in the face, as we poke at a ceiling we should never go above. That’s the real message for today.