In yet another “the Brexit situation has developed not necessarily to UK’s advantage” sighting, the Financial Times reported on Saturday that Britain threatens to quit Galileo satellite project, which we strongly urge you to read in full.

The short version is the UK’s ultimatum looks like an effort to rebrand an inevitable loss as some sort of British success. Expect this to become a heavily-worn playbook. From the pink paper:

Greg Clark, business secretary, is also calling for an immediate three-month freeze of the procurement process…

Bidders are due to put in their best and final offers for the ground control segment of Galileo next week, while a second, bigger tender for back-up satellites, worth hundreds of millions of euros, is expected to be launched within weeks….

In a blunt letter dated April 19, also sent to EU industry commissioner Elzbieta Bienkowska, Mr Clark said that unless Britain had access to secure parts of the Galileo project it could simply walk away. Since the project’s launch in 2003, the UK has funded roughly 12 per cent of Galileo’s annual budget….

The EU has threatened to exclude the UK from Galileo’s sensitive “public regulated service”, an encrypted navigation system for government users. It said that sharing sensitive information with a third country — Britain — would “irretrievably compromise” the service.

Britain’s armed forces were also keen to access PRS, a rival to the US’s GPS which is designed to continue working when all other navigation services are jammed.

However, the Brussels move would make that impossible as under EU rules PRS can be accessed only by member states….

A senior industry executive said recently to the Financial Times that excluding British companies from secure parts of Galileo would mean that they could no longer bid for the software and ground links that control the 30 orbiting satellites.

Airbus manages the ground control system out of Portsmouth….

“The UK is the incumbent,” the source said. “If the tendering rules are not changed within weeks then Airbus would be forced to move work out of the UK. The work would go to France because they have the most relevant expertise.”

One could argue that the security restrictions are Brussels scheming to give EU firms as much commercial advantage as possible, or alternatively, that the UK had decided to leave Galileo when it invoked Article 50 but somehow lost track of that fact.

But sometimes the stated reason really is the main issue, or at least an important issue. With the UK in the Five Eyes and the US being second only to the Chinese in not respecting privacy rights, it seemed plausible that many members of the EU27 were leery of the UK having its nose in the EU security tent and were acting on this sentiment now that they can. Some might regard that concern as even more pressing given that a UK outside the EU is almost certain to become more dependent on the US.

I ran this theory by our Richard Smith, PlutoniumKun, and Clive. First from Richard:

Just one aspect of a much-predicted and horrible trainwreck: this story will just get bigger and bigger thanks to all the other UK touch points with the European aerospace industry, which are innumerable.

PlutoniumKun then weighted in:

The US has long been doing its best to sabotage the Galilleo system. It’s superior to GPS and is out of US control if it wishes to degrade it during a conflict (i.e. to stop an opponent from using it for their own military).

It’s had all sorts of technical and cost issues, and I seem to recall suggestions that some of the problems, such as failing clocks in the launched satellites were not ‘accidents’. And of course it has to be assumed that the UK would co-operate with the CIA with intelligence.

I think the EU have tried very hard to keep Gallileo civilian – i.e. its very firmly an EU project, not a NATO one, even though it has very obvious military potential. So in that sense excluding the UK makes absolute sense in the context of Brexit. It does though raise lots of potential issues with various Anglo-German and Anglo-French weapons projects.

Suspicion of UK intelligence services in Europe goes back a long way, and long predates the Internet. All telephone calls between Ireland and the UK, for example, have been monitored with early word recognition systems since as long back as the 1980’s (this emerged by accident in a court case many years ago). You could actually see the interception dishes in Holyhead, Wales (a small station built under the main microwave tower which linked the Irish and UK phone systems before the days of fibre optic cables). And while the Wikileaks revelations that Merkel’s phone calls were monitored won’t have surprised the Germans or French, that doesn’t mean they were not angered by it.

So I think its probably a reasonable hypothesis that various intelligence agencies in Europe are now taking the opportunity to ‘Europeanize’ systems. There have obviously been increased moves to protect data from the big 5 internet giants and even talk of creating EU alternatives to WhatsApp, etc. Whether all these are part of a concerted policy or its just lots of different countries and agencies coming to the same conclusion (i.e. Europe must protect itself from US intrusion, and the UK cannot be trusted), can only be speculated I think.

Right from the instigation of the European project, the EU acting as bulwark against the US was baked-in. Here, although expressed in cold-war imagery, the message and intent is unmistakable in this 1970’s German cartoon: 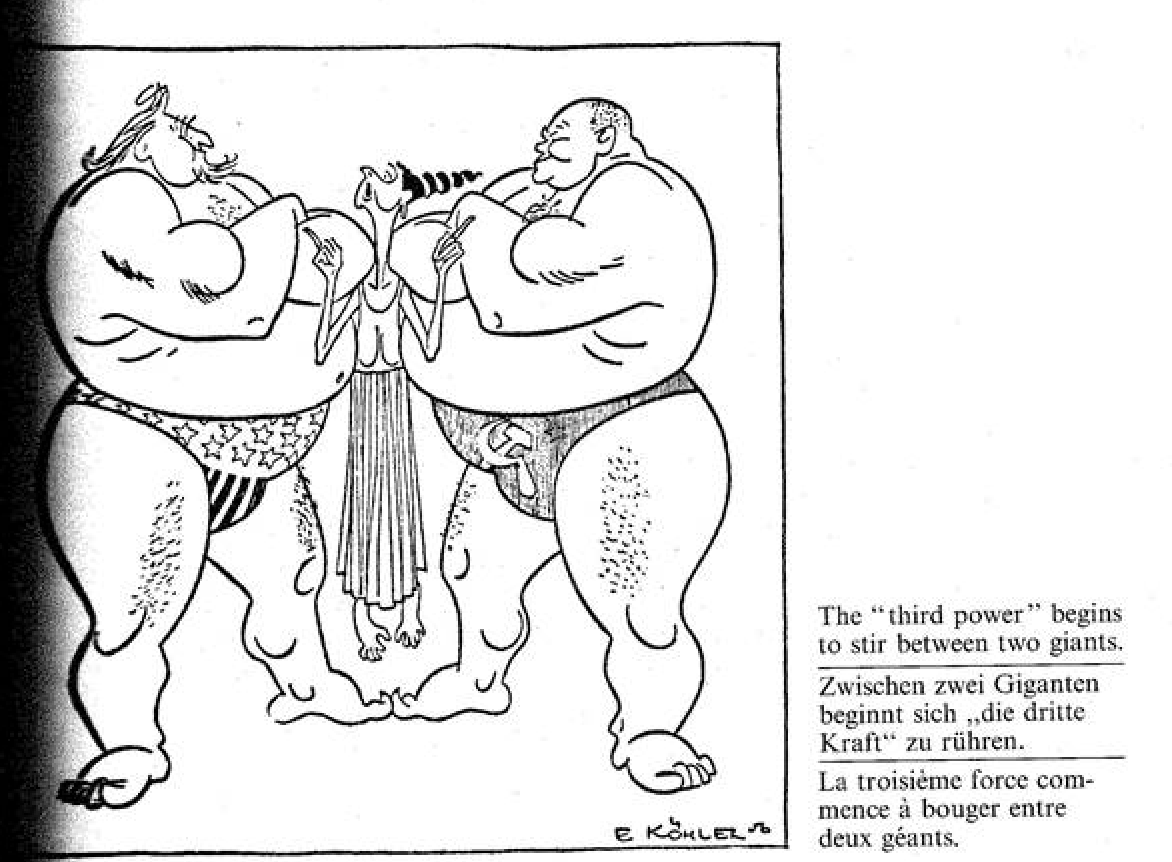 This ran completely contrary to the UK’s historic and practically implemented policy of being tightly allied to the US. We weren’t called the Unsinkable Aircraft Carrier for nothing – the UK didn’t merely offer diplomatic niceties to the US, they provided on-the-ground resources and support such as the infamous “RAF” (which is really USAF) Menwith Hill.

It is implausible that the US’ interception of EU communications would have been possible without the presence of such US assets in the UK. The EU tolerated this unhelpfully and often unhealthily close relationship and even, to a limited degree, bought into the largely fictional interpretation that the UK, by having a foot in both camps – so to speak – would be a bridge between the EU and the US. Such a bridge being necessary because the EU didn’t trust the US to allow it to grow into anything which might – as the above cartoon inferred – be in a position to stand up for its own interests without interference, but yet could hardly not have any engagement with the US at all or be too overt in its resistance to US influence.

Post-Brexit, the security landscape will change in a fundamental way. The EU will have to respond to that. It would be remiss of it not to.

And for the UK, an all-but unspoken though perfectly clear to those who supported Brexit outcome was that the UK would have to have stronger links to the US in not only trade but also in the things you barter to be allowed preferential trade terms. Which is US bases, US personnel and support for US foreign policy or strategy. This is the same deal I see right in front of my eyes when I visit Japan – they get to trade with the US fairly unimpeded and they get US security support, but they have to toe the US party line and they have a huge amount of US military infrastructure sitting (not always happily with the locals) right where the US deems it wants it to be. This point wasn’t exactly played up by the Brexit campaign because the US isn’t exactly flavour of the month a lot of the time, but it wasn’t played down, either.

I agree with PlutoniumKun – the EU will have to firewall itself off from the UK because the UK will increasingly become a proxy for the US. And the US hasn’t itself (yet) really woken up and dealt with the possibility of an EU which is, I think we can safely say, no longer a geopolitical Cinderella but a comic turn, turned serious. When it does so, and it is a “when”, not an “if”, there will be a fundamental realignment between the EU and the US. It seems that the EU is already preparing for this eventuality, hence the moves to marginalise if not fully cut itself off from UK security services’ information sharing. The Commission’s moves against what are only thinly disguised arms of the US surveillance state (such as Microsoft and Google) is another case in point.

If Clive is right, that a Japan-like relationship with the US is the endgame for the UK, this will make a mockery of the Brexit selling point that that UK would be reclaiming its independence. We’ve repeatedly described Japan as a military protectorate of the US and Clive gave some examples of what that means in practice. And do not forget that the US had disproportionate influence over Japanese policy. It tried forcing Japan to open its markets to foreign firms, as well as pushing Japan to participate in the Paris accord, a concerted and successful effort to greatly increase the price of the yen. That did succeed in reducing Japanese exports to the US, but did virtually nothing to increase US exports to Japan, due to many non-tariff trade barriers, including that Japanese greatly preferred Japanese products because they saw them as better quality.

However, one place where the US did have its way was forcing rapid deregulation Japanese banks. As we’ve described longer-form elsewhere, that made Japan’s bubble and eventual bust much worse than it otherwise would have been. We were in Japan during the 1987 crash, and the Fed told the Bank of Japan to buy Treasuries to stabilize the market. The BoJ dutifully called the so-called “city banks” like my then employer, Sumitomo Bank, who dutifully complied. To put it bluntly, that’s not the behavior of a sovereign country. The US may not pull quite such heavy-handed moves on the UK, but anyone who thinks the US will treat a post-Brexit UK as an equal partner is smoking something very strong.