Lambert here: On the one hand, it’s refreshing to see the mainstream worrying about “the real economy.” On the other hand, the mainstream doesn’t have a very good track record for research outcomes that take care of anyone’s interests but their own and a very select few, does it? For example, the authors include “learning on-the-job” in their model of human capital. Everything I hear from the NC commentariat and elsewhere tells me that on-the-job training is no longer the norm, at least in the United States. Just spitballing here, but if you want to understand the market for labor power, maybe talk to labor?

The Great Recession has generated a debate regarding the potential effects on the long-run levels of output and unemployment of stabilising the real economy (e.g. Summers 2015). This issue takes on additional importance as the current economic situation in some countries, including the US, imply that there is a monetary policy trade-off between stabilising inflation and the real economy. In particular, the unemployment level is low at the same time as inflation is low. More generally, the question at hand is whether policymakers, in particular central bankers, should try to stabilise the real economy, beyond taking into account how real factors affect inflation. In this column, we will shed light on this question by summarising research indicating that stabilising the real economy raises the long-run level of output.

Internationally, the relative emphasis put on stabilising the real economy varies, both in terms of formal mandates and in terms of de facto policy. The ECB mandate clearly states price stability as the goal, without explicit consideration of real economic stability. The Federal Reserve instead has a dual mandate to stabilise prices and promote maximum employment. The remaining advanced countries’ central bank mandates are somewhere in-between these two polar cases.

Although most people hold the belief that business cycles are costly, the dominating macroeconomic theories of recent decades – both real business cycle theory and new Keynesian theory – imply that the welfare cost of output fluctuations are negligible.1 This result builds on three premises:

In this column we question the last premise. In the modern macroeconomic literature, DeLong and Summers (1989) were among the first to forcefully criticise this assumption both theoretically and empirically. They instead argue that (demand) stabilisation policies can affect the mean level of output and unemployment. Hysteresis induced by insider-outsider wage bargaining is probably the most long-standing theoretical argument why unemployment volatility can have long-term negative effects (Blanchard and Summers 1986). On the empirical side, it has long been well established that output volatility is bad for output growth. The seminal paper is Ramey and Ramey (1995). Recently we have seen a handful of papers spelling out the mechanisms by which real volatility hurts output growth. One may speculate that the Great Recession and the slow recovery thereafter have encouraged this strand of research.

Let us here briefly list the recent relevant papers and the various theoretical mechanisms by which business cycle variation may reduce the long-run output level. Holden (2017) contains an overview of several such different mechanisms. Hassan and Mertens (2017) show that households’ expectational errors about future productivity increase equity risk-premia and thereby reduce output via lower investment. Dupraz et al. (2017) spell out how downward nominal wage rigidity in a search and matching framework implies that business cycles reduce output and increase unemployment if average inflation is low. The same end result is obtained by Den Haan and Sedlacek (2014) who show how limitations in contracts within an employer-employee relationship result in inefficient dissolution of matches due to business cycles.

In a recent paper, Blanchard (2017) concludes that the most persuasive channel through which business cycles persistently affect potential output, and thereby generate hysteresis, is through workers becoming less employable. In a recent paper (Walentin and Westermark 2018), we follow this line of thinking and show that business cycles substantially reduce the level of employment and output in a labour market search model with learning on-the-job and skill loss when unemployed. The mechanism is as follows: It is well known that the Beveridge correlation is negative, i.e. that vacancies and unemployment covary negatively in the data. Via the (nonlinear) matching function, this implies that business cycles reduce the average number of new jobs and hence employment. At an intuitive level, this happens because vacancies, and therefore job finding rates, tend to be high when unemployment is low, thereby yielding fewer new jobs than in the absence of business cycles. Then, since learning on-the-job implies that average human capital is increasing in the employment rate, it follows that aggregate volatility reduces human capital. This, in turn, reduces the incentives to post vacancies, further reducing employment and so on in a vicious circle. The mechanism for how aggregate volatility reduces employment, human capital and thereby output is illustrated graphically in Figure 1. Quantitatively the effects we find are large. In particular, business cycle variation in unemployment reduces average output by 1.5%. 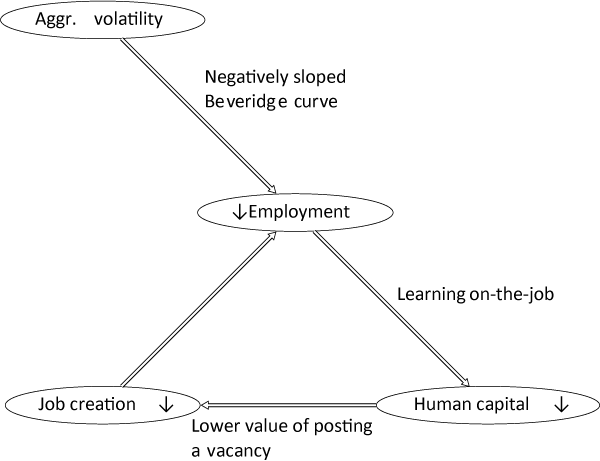 More generally, the fact that workers accumulate skills when working (‘learning on-the-job’) implies that any sustained decrease in employment, such as the Great Recession, reduces future (potential and actual) employment and output, as aggregate human capital is reduced.

In sum, both empirical and theoretical arguments increasingly indicate that output and unemployment volatility reduces output and thereby impose substantial costs to society. This is a solid argument in favour of policies that stabilise output and unemployment, in addition to inflation (see Lepetit 2017 for a quantitative treatment).[2] That said, we should not underestimate the various challenges that both fiscal and monetary policy face when attempting to stabilise the real economy. For example, there are substantial practical difficulties in measuring what output trend or unemployment level the economy should optimally be stabilised around. Nevertheless, recent advances in economic modelling tilts the policy conclusion towards stabilising the real economy more than previous research has motivated.

Authors’ note: The opinions expressed in this column are the sole responsibility of the authors and should not be interpreted as reflecting the views of Sveriges Riksbank.