Readers, on Memorial Day I usually publish one of Goya’s etchings from The Disasters of War (Robert Hughes’s Goya is well worth a read). Parades are all very well, but let’s get real. So herewith Lo mismo (The same): 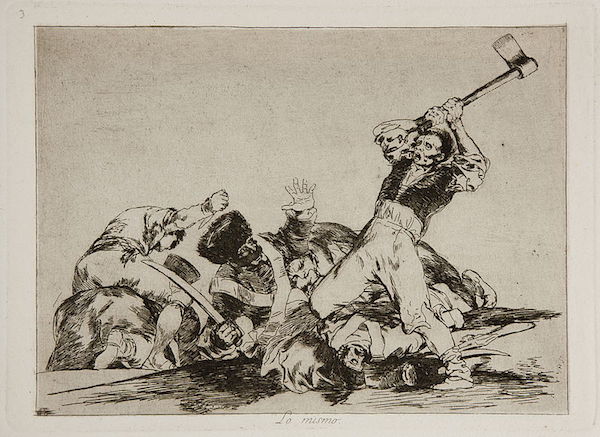 The New York Times gives a history of Memorial Day:

The official history of Memorial Day goes like this: In 1868, three years after the Civil War ended, a group of Union veterans established a Decoration Day for the nation to adorn the graves of the war dead with flowers. A retired Union major general, John A. Logan, set the date of the holiday for May 30, and the holiday’s first observance was at Arlington National Cemetery.

David W. Blight, a historian at Yale, has a different account. He traces the holiday to a series of commemorations that freed black Americans held in the spring of 1865, after Union soldiers, including members of the 21st United States Colored Infantry, liberated the port city of Charleston, S.C.

Digging through an archive at Harvard, Dr. Blight found that the largest of these commemorations took place on May 1, 1865, at an old racecourse and jockey club where hundreds of captive Union prisoners had died of disease and been buried in a mass grave. The black residents exhumed the bodies and gave them proper burials, erected a fence around the cemetery, and built an archway over it with the words, “Martyrs of the Race Course.”

Some 10,000 black people then staged a procession of mourning, led by thousands of schoolchildren carrying roses and singing the Union anthem “John Brown’s Body.” Hundreds of black women followed with baskets of flowers, wreaths and crosses. Black men, including Union infantrymen, also marched. A children’s choir sang spirituals and patriotic songs, including “The Star-Spangled Banner.”

“The war was over, and Memorial Day had been founded by African-Americans in a ritual of remembrance and consecration,” Dr. Blight wrote in a 2011 essay for The New York Times. “The war, they had boldly announced, had been about the triumph of their emancipation over a slaveholders’ republic. They were themselves the true patriots.”

It’s not clear that Blight’s history has become the conventional wisdom, but Blight’s podcast (“The Civil War and Reconstruction Era, 1845-1877”) is wonderful, and includes an episode on the race course events; NC commenter Bunk McNulty turned me on to it a couple of years ago.

Readers, feel free to contact me at lambert [UNDERSCORE] strether [DOT] corrente [AT] yahoo [DOT] com, with (a) links, and even better (b) sources I should curate regularly, (c) how to send me a check if you are allergic to PayPal, and (d) to find out how to send me images of plants. Vegetables are fine! Fungi are deemed to be honorary plants! If you want your handle to appear as a credit, please place it at the start of your mail in parentheses: (thus). Otherwise, I will anonymize by using your initials. See the previous Water Cooler (with plant) here. Today’s plant (DE): 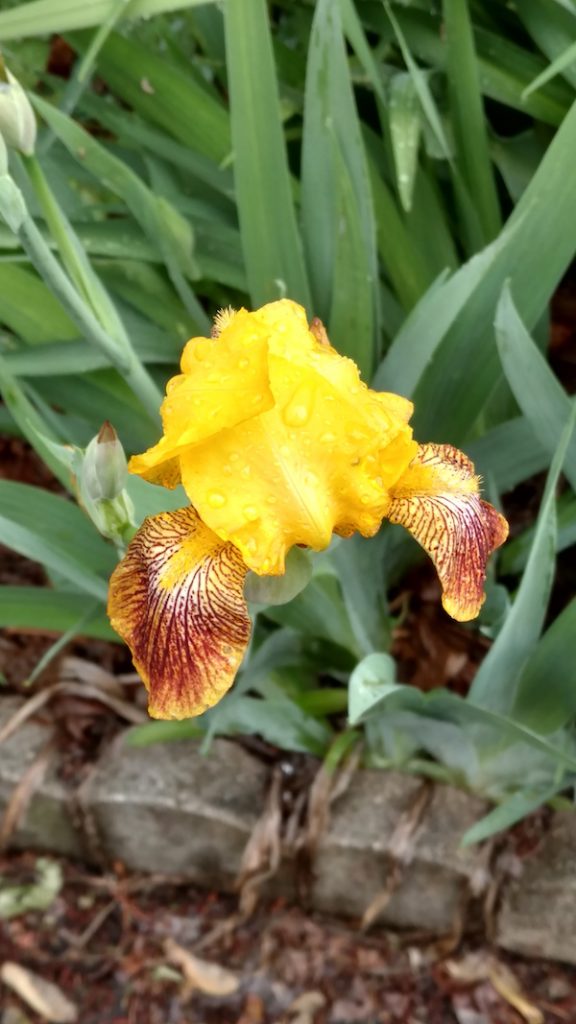 DE writes: “Growing by my sun porch drinking up water that otherwise would be on a journey to NYC.” Not especially relevant to Memorial Day, but my favorite flower.