By Chad Terhune, Kaiser Health News Senior Correspondent, who previously worked for the Los Angeles Times, where he spent four years covering the business of health care. Before the Times, he was an award-winning reporter for The Wall Street Journal and Businessweek. Originally published at Kaiser Health News

Cooking dinner one night in March, Mark Frizzell sliced his pinkie finger while peeling a butternut squash and couldn’t stop the bleeding.

The 51-year-old businessman headed to the emergency room at Sutter Health’s California Pacific Medical Center in San Francisco. Sutter charged $1,555 for the 10 minutes it treated him, including $55 for a gel bandage and $487 for a tetanus shot.

“It was ridiculous,” he said. “Health insurance costs are through the roof because of things like this.”

For years, economists and researchers have warned of the dangers posed by large health systems across the country that are gobbling up hospitals, surgery centers and physicians’ offices — enabling them to limit competition and hike prices.

Becerra’s suit amounts to a giant test case with the potential for national repercussions. If California prevails and is able to tame prices at Northern California’s most powerful, dominant health system, regulators and politicians in other states are likely to follow.

“A major court ruling in California could be a deterrent to other hospital systems,” said Ge Bai, an assistant professor at Johns Hopkins University who has researched hospital prices nationwide. “We’re getting to a tipping point where the nation cannot afford these out-of-control prices.”

Reflecting that sense of public desperation, Sutter faces two other major suits — from employers and consumers — which are wending their way through the courts, both alleging anticompetitive conduct and inflated pricing. Meanwhile, California lawmakers are considering a bill that would ban some contracting practices used by large health systems to corner markets.

Sutter, a nonprofit chain, is pushing back hard, denying anticompetitive behavior and accusing Becerra in court papers of a “sweeping and unprecedented effort to intrude into private contracting.” Recognizing the broader implications of the suit, both the American Hospital Association and its California counterpart asked to file amicus briefs in support of Sutter.

In his 49-page complaint, Becerra cited a recent studyfinding that, on average, an inpatient procedure in Northern California costs 70 percent more than one in Southern California. He said there was no justification for that difference and stopped just short of dropping an expletive to make his point.

“This is a big ‘F’ deal,” Becerra declared at his March 30 news conference to unveil the lawsuit. In an interview last week, he said, “We don’t believe it’s fair to allow consolidation to end up artificially driving up prices. … This anticompetitive behavior is not only bad for consumers, it’s bad for the state and for businesses.”

To lessen Sutter’s market power, the state’s lawsuit seeks to force Sutter to negotiate reimbursements separately for each of its hospitals — precluding an “all or nothing” approach — and to bar Sutter employees from sharing the details of those negotiations across its facilities. Becerra said Sutter has required insurers and employers to contract with its facilities systemwide or face “excessively high out-of-network rates.”

Heft In The Marketplace

Overall, Sutter has 24 hospitals, 36 surgery centers and more than 5,500 physicians in its network. The system boasts more than $12 billion in annual revenue and posted net income of $958 million last year.

The company’s heft in the marketplace is one reason why Northern California is the most expensive place in the country to have a baby, according to a 2016 report. A cesarean delivery in Sacramento, where Sutter is based, cost $27,067, nearly double what it costs in Los Angeles and New York City. 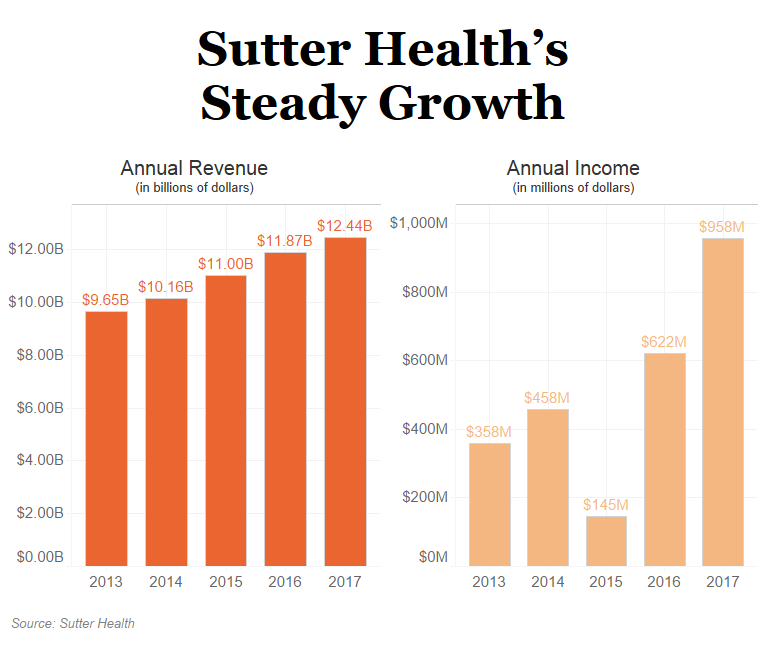 For years, doctors and consumers have also accused Sutter of cutting hospital beds and critical services in rural communities to maximize revenue. “Patients are the ones getting hurt,” said Dr. Greg Duncan, an orthopedic surgeon and former board member at Sutter Coast Hospital in Crescent City, Calif.

Sutter says patients across Northern California have plenty of providers to choose from and that it has held its average rate increases to health plans to less than 3 percent annually since 2012. It also says it does not require all facilities to be included in every contract — that insurers have excluded parts of its system from their networks.

As for emergency room patients like Frizzell, Sutter says its charges reflect the cost of maintaining services round-the-clock and that for some patients urgent-care centers are a less costly option.

“The California Attorney General’s lawsuit gets the facts wrong,” Sutter said in a statement. “Our integrated network of high-quality doctors and care centers aims to provide better, more efficient care — and has proven to help lower costs.”

Regulators in other states also have sought to block deals they view as potentially harmful.

In North Carolina, for instance, the state’s attorney general and treasurer both expressed concerns about a proposed merger between the University of North Carolina Health Care system and Charlotte-based Atrium Health. The two dropped their bid in March. The combined system would have had roughly $14 billion in revenue and more than 50 hospitals. 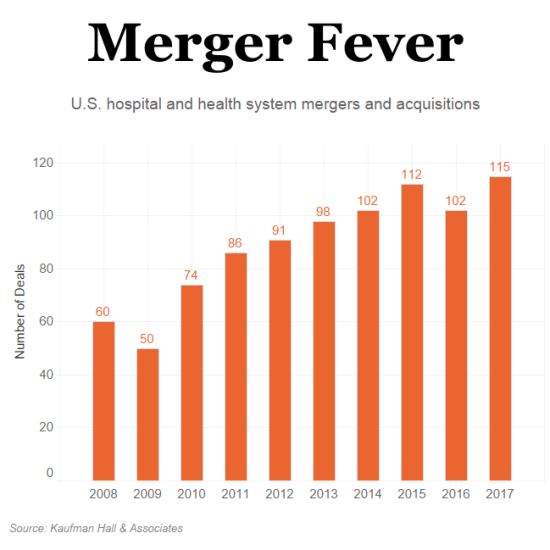 Antitrust experts say states can deliver a meaningful counterpunch to health care monopolies, but they warn that these cases aren’t easy to win and it could be too little, too late in some markets.

“How do you unscramble the egg?” said Zack Cooper, an assistant professor of economics and health policy at Yale University. “There aren’t a lot of great solutions.”

California authorities took their time sounding the alarm over Sutter — a fact Sutter is now using against the state in court.

Becerra, a Democrat and former member of Congress, was appointed to replace Harris last year, took over the investigation and sued Sutter on March 29. His aggressive action comes as he prepares for a June 5 primary against three opponents.

Sutter faces a separate class-action suit in San Francisco state court, spearheaded by a health plan covering unionized grocery workers and representing more than 2,000 employer-funded health plans. The plaintiffs are seeking to recoup $700 million for alleged overcharges plus damages of $1.4 billion if Sutter is found liable for antitrust violations. Sutter also has been sued in federal court by five consumers who blame the health system for inflating their insurance premiums and copays. The plaintiffs are seeking class-action status.

The judge sanctioned Sutter in November after finding that Sutter was “grossly reckless” in intentionally destroying 192 boxes of evidence that were relevant to antitrust issues. As a result, Karnow said, he will consider issuing jury instructions that are adverse to Sutter.

In a note to employees, Sutter chief executive Sarah Krevans said she deeply regretted the situation but “mistakes do happen.”

In an April 27 court filing, Sutter’s lawyers criticized the state for piggybacking onto the grocery workers’ case. “The government sat on its hands for seven years, exposing the public to the alleged anticompetitive conduct. … Rather than driving the agenda, the Attorney General seeks to ride coattails.”

Outside court, California legislators are taking aim at “all or nothing” contracting terms used by Sutter and other hospital chains. The proposed law stalled last year amid opposition from the hospital industry. But consumer and labor groups are seeking to revive it this year.

In the meantime, Frizzell said he will probably wind up at one of Sutter’s hospitals again despite his disgust over his ER bill. “Most of the hospitals here are Sutter,” he said. “It’s difficult to avoid them.”