The 2015 Paris Climate Agreement to limit the rise in global warming to 2°C compared to pre-industrial levels requires massive reductions in CO2 emissions in the next decades and near zero overall greenhouse gas (GHG) emissions from the next century onward. The limiting of total carbon emissions will leave the majority of fossil fuel reservesas ‘stranded assets’ (Carbon Tracker Initiative 2011, 2013, McGlade and Ekins 2015), with companies owing fossil fuel unable to use most of their reserves. The large fraction of potentially unburnable fossil fuels poses substantial financial risk to fossil fuel companies. Nevertheless, fossil fuel firms still largely invest in locating and developing new fossil fuel reserves (Carbon Tracker Initiative 2013). This ongoing investment, together with the already large fraction of potentially stranded assets, suggests that financial markets neglect the possibility that fossil fuel reserves become ‘stranded’ resulting in a ‘carbon bubble’, i.e. that fossil fuel firms are overvalued.

The potential effects of a carbon bubble on financial stability have been recently discussed in the academic literature (Weyzig et al. 2014, Schoenmaker et al. 2015, Batten et al. 2016) and are increasingly appearing on the agenda of regulators and supervisors (Bank of England 2015, Carney 2015, ESRB 2016). However, there is no clear evidence if whether, and to what extent, investors price the risk of unburnable carbon. Studying equity markets, recent research identifies an insignificant impact of climate/technology news on fossil fuel firms’ abnormal returns (Batten et al. 2016, Byrd and Cooperman 2016). This insignificant impact could be due to investors’ difficulties in assessing credible future climate policies and their impact on carbon-intense sectors, to investors believing in climate policy inaction, or to already accurately priced risk of climate-related stranded fossil fuels (Batten et al. 2016, Byrd and Cooperman 2016). Thus, we are missing insights into the effect of climate policy risk on the pricing of financial products.

Is There a Carbon Bubble in the Corporate Loan Market?

In a recent paper, we provide the first evidence for climate policy risk pricing, using evidence from the corporate loan market (Delis et al. 2018). Carbon-intensive sectors are largely debt financed, implying that the impact of stranded fossil fuels can easily spill over to the banking sector. This almost naturally generates the question of whether banks consider the risk that fossil fuel reserves will become stranded when originating or extending credit to fossil fuel firms. Essentially, this implies that if banks thoroughly consider the risk of climate policy exposure in the pricing of corporate loans, then no carbon bubble exists in the credit market.

This implies that we require information on the total amount of fossil fuel reserves of firms across countries. As these data are not readily available in conventional databases, we hand-collect them from firms’ annual reports. Some firms hold fossil fuel reserves in more than one country, so we construct a relative measure of reserves for each firm, in each country, and in each year. Finally, we generate a firm-year measure of climate policy exposure (risk) from the product of relative reserves and either one of the Climate Change Cooperation Index (C3I) by Bernauer and Böhmelt (2013) or the Climate Change Policy Index (CCPI) by Germanwatch. These country-year indices, respectively available for the periods 1996-2014 and 2007-2017, reflect environmental policy stringency and thus risk.

Figure 1 Climate policy exposure and the cost of loan 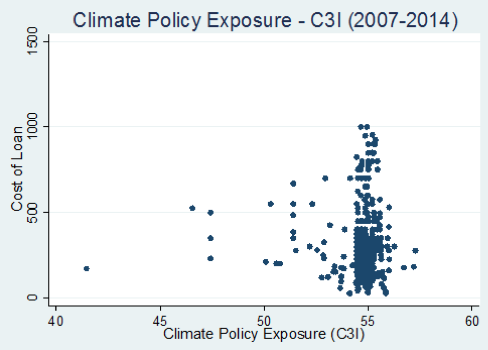 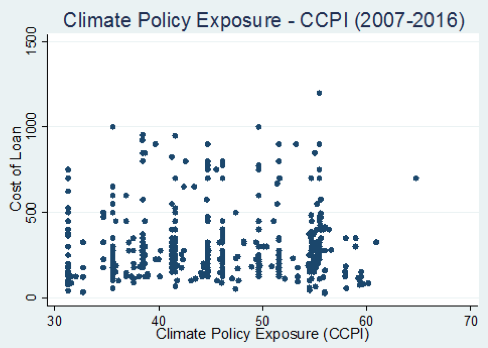 Note: The cost of loan in basis points is defined as the loan spread plus any facility fee.

Our Results: No Evidence of Pricing of Climate Policy Risk Prior to 2015, Some Pricing of Risk after 2015

Our results from the full 2007-2016 sample are consistent with a carbon bubble in the corporate loan market.

To give an impression of the magnitude of this effect, the 2-basis point increase implies an increase in the total cost of the loan with a mean amount ($19 million) and maturity (four years) of around $200,000. Then, we hand collect data on the dollar value of fossil fuel reserves and find that the mean fossil fuel firm in our sample holds approximately $4,679 million in such reserves. Thus, it seems unlikely that the corresponding increase that we identify in the post-2015 period covers the potential losses from stranded assets.

We further investigate this finding by using the actual value of the holdings of proved fossil fuel reserves, instead of simply examining average differences between the fossil fuel and non-fossil fuel firms. Retaining the dichotomy between the pre-2015 and post-2015 periods, we find that a one standard deviation increase in our measure of climate policy exposure implies an AISD that is higher by approximately 16 basis points for the fossil firm with mean proved reserves scaled by total firm assets in the post-2015 period versus the non-fossil fuel firm. This implies an increase in the total cost of borrowing for the mean loan of $1.5 million. This extra cost of borrowing represents noticeable evidence that banks are aware of the climate policy issue and started pricing the relevant risk post-2015.

We also document a direct negative effect of climate policy exposure on the maturity of loans to fossil fuel firms in the post-2015 period.Moreover, we show a tendency of fossil fuel firms to obtain slightly larger loans compared to non-fossil fuel firms when environmental policy becomes more stringent. Even though the respective increase in loan amounts is economically rather small, our finding is in line with a substitution effect due to higher environmental policy risk from ‘lost’ access to equity finance toward bank credit. Finally, we document a slightly higher loan pricing to fossil fuel firms by ‘green banks’ (i.e. those participating in the United Nations Environment Programme Finance Initiative) when climate policy risk increases.

References available in the original