Yves here. Please read past the pearl-cultching opening remarks about naive and short-sighted populism and focus on the analysis.

There has been some disagreement over the roots of the recent rise of populism in Europe. This column examines variations in exposure to economic shocks and in ability to react to them in different regions of Europe to show that the cultural backlash against globalisation has been driven by economic woes. In regions where globalisation was present but that have benefited economically, there has been no such backlash and the populist message has retreated. The message is clear: if one wants to defeat populism, one must defeat first economic insecurity.

The surge of populism in Europe and the US has often put at the centre stage three ideological actors of society: the people, the elite, and the ‘other’ (foreigners, immigrants) to whom, in the populist narrative, the elite has sold the people out.

Populist policies have often picked convenient scapegoats for economic grievances, while hiding real policy trade-offs. They have mastered the art of ‘follow-ship’ as opposed to leadership, where everything has become more short-term and responsive to instant polls. National short-term concerns have become paramount and states, rather than seeing common good for the long run, have become ‘inward-focused’ both in terms of time and space.

What has caused the rise of populist parties in continental Europe? Are the roots of the success of populist platforms cultural, as some researchers advocate, or are they mainly economic as others – us among them – have pointed out?

Rodrik (2018) distinguishes between left-wing and right-wing variants of populism, which differ with respect to the societal cleavages that populist politicians highlight, and argues that these different reactions are related to the relative salience of different types of globalisation shocks. Colantone and Stanig (2018) analyse the impact Chinese import shock and show that this triggered an increase in support for nationalist and radical right parties in Western Europe.

In a recent paper, we show how different exposure to economic shocks and different ability to react to them in different regions of Europe sheds light on these questions (Guiso et al. 2018). We study how the populist vote share1across European regions responded to two major economic shocks: the globalisation shock (i.e. the ‘China Effect’) and the European financial crisis of 2008-2013. Both shocks, in principle, caused economic distress and insecurity, but not equally everywhere. The China Effect – the increased economic insecurity following the globalisation shocks – is known to have boosted populist support in Europe as much as in the US, but we provide two novel and perhaps unexpected findings.

Second, the globalisation shock has a substantially larger effect on populist support in euro area countries than in other comparable Western countries. This finding may be puzzling as all Western European countries were similarly exposed to China import competition. However, euro area countries were not equally capable of reacting to this shock. Indeed, euro area countries were constrained in their policies by what we call a ‘policy strait jacket’: constraints imposed by the single currency which prevented adopting the ‘best’ domestic policies to counteract the shock, for instance through a devaluation of the currency. We estimate that the policy strait jacket effect explains three-quarters of the greater consensus to populist parties in the euro area compared to Western non-euro area European countries. The role of the policy strait jacket in fuelling populist consensus emerges most clearly during the financial crisis and the European sovereign debt crisis. The financial crisis created populist consensus across the board, but its effects were most dramatic in the euro area and particularly in those countries, like Italy, where the strait jacket was particularly tight. This policy strait jacket amplified the effects of the shock, or at least created the perception that it was in part to blame for the lack of recovery. This, in turn, sparked frustration among voters and disappointment towards the domestic and European elites opening the ground to populist proposals.

Consistent with this interpretation, confidence in European institutions and in the ECB has dropped dramatically in the euro area countries and only mildly in non-euro area countries (see Figure 1). Interestingly, among the former countries the voter frustration was greater precisely where the policy strait jacket was tighter, as Figure 2 neatly documents.

a) … in the European Parliament 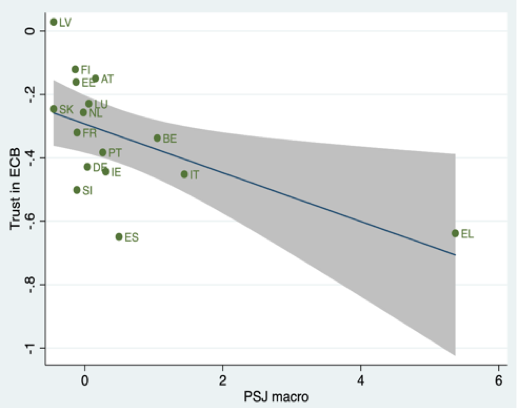 b) … the European Commission 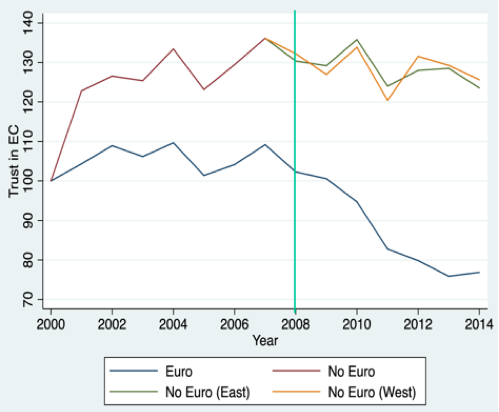 The above results underline the fact that the deep cause of populism cannot be culture, it is economics.  This view is confirmed in our complementary study using individual survey data instead based on the European Social Survey (ESS), which maps the attitudes, beliefs, and behaviour patterns of European citizens taking place every two years since September 2002, by means of face-to-face interviews (Guiso et al. 2017). The ESS, besides reporting on voter’s attitudes towards immigration and traditional politics, also asks people whether they voted in the last parliamentary election in their country and which party they voted for. Therefore, it is possible to identify whether a populist party was voted for. A pseudo-panel analysis allows to study changes in individual economic insecurity and changes in attitudes such as distrust in political parties and anti-immigration sentiments, which are often taken as measures of cultural traits.

a) … trust in political parties 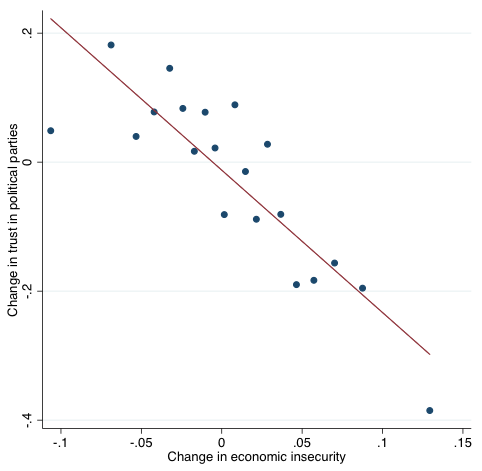 b) … sentiments towards immigrants 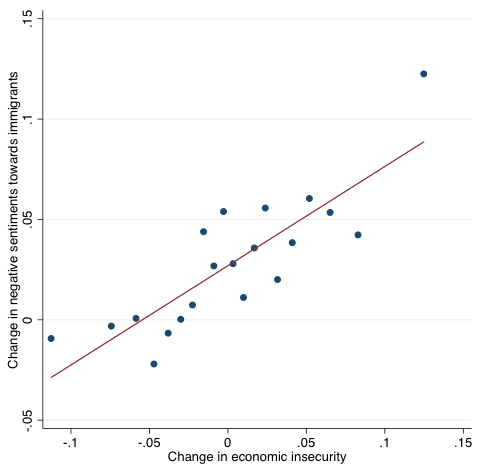 In sum the populist strategy of scapegoating immigrants was very successful – the immigration card has proven to be a powerful grievance that could be awakened by economic downturns.  Moreover, countries where a populist party is present have much more anti-immigrant sentiments, which suggests that the populist rhetoric affects greatly these sentiments.

The cultural backlash against globalisation, traditional politics and institutions, immigration, and automation cannot be an exogenous occurrence, it is driven by economic woes. In fact, as we show, in regions where globalisation was present but have benefited economically there is no such cultural backlash at all and the populist message has retreated. The policy implication and take-home message that stems from our results is clear: if one wants to defeat populism, one must defeat first economic insecurity.

Can consensus towards populist forces persist even after economic insecurity has been reabsorbed? This is the key question today. While the documented culture backlash cannot be the root cause of populist success as it is itself borne out of economic insecurity, it may play a crucial role looking forward. If the new identity politics succeeds in reshaping peoples’ beliefs and attitudes, sentiments can acquire an autonomous role and may continue to exert an effect even when their economic cause is gone.