Yves here. The idea that the effect of tax evasion means that the rich are even richer than they appear ought to be obvious, yet the notion is almost entirely absent from discussions of income and wealth inequality. Not surprisingly, in classic drunk under the streetlight behavior, some analysts do adjust income inequality data for the effect of transfers, which lowers the apparent level of inequality, without trying to adjust for what is almost certainly the much larger impact of tax evasion. Gabriel Zucman, one of the co-authors of this post, has estimated in his important bookk The Hidden Wealth of Nations that 8% of global household wealth is in tax havens, which gives a feel for the magnitude of tax evasion.

Who evades taxes in developed economies? The question is fascinating in its own right and matters a great deal for the study of inequality because scholars typically rely on tax records to estimate the concentration of income and wealth (e.g. Piketty et al. 2018). If the rich dodge taxes more than the poor, tax records will underestimate inequality.

In recent research (Alstadsæter et al. 2017), we set out to estimate how tax evasion varies with wealth and to correct inequality statistics for differences in evasion rates. We conduct a detailed investigation of the case of Scandinavian countries, where particularly good data exist. We start our examination with audits conducted randomly by tax authorities. These audits are the current ‘gold standard’ in the literature to measure tax evasion (e.g. Kleven et al. 2011), but they have a key limitation: they do not satisfactorily capture tax evasion by the very wealthy, because they fail to detect sophisticated forms of evasion involving anonymous shell companies and secret offshore accounts.

To bridge this gap, we use new data leaked from offshore financial institutions and information from recent tax amnesties. These new data sources enable us to capture the forms of tax evasion conducted by households with dozens of millions of dollars in wealth. They allow us to shed a bright light on a world that is not typically observable to researchers. By combining leaked data, amnesty data, and random audit data, we can thus provide a much more comprehensive picture of how much each social group evades in taxes than was available until now.

The first leaked dataset we use is a trove of data leaked from HSBC Switzerland, later known as the ‘Swiss leaks’. In 2007, an employee extracted the internal records of the bank and turned the data over to the French government. The leaked documents included the complete internal records of the more than 30,000 clients of the bank. At the time, HSBC Switzerland was a major actor in offshore banking, managing assets of about $120 billion, or approximately 5% of all the foreign wealth managed by Swiss banks.

This HSBC leak is a unique source of information to study tax evasion because the leak is a random event and because it comes from a large and arguably representative offshore bank. Who owned the wealth hidden in that Swiss bank at the time of the leak?

We find that the wealthier you were, the more likely you were to hide assets at HSBC Switzerland. Moreover, for those who concealed assets in HSBC Switzerland, tax evaders hid on average the equivalent of 40% of their true wealth (with no trend across the wealth distribution). As a result, although HSBC Switzerland had dozens of thousands of clients at the time of the leak, the wealth held there was concentrated in just a few hands.

In a second step, we conduct a similar analysis in other samples of individuals with offshore wealth, namely owners of shell corporations exposed in the Panama Papers, and taxpayers who voluntarily disclosed previously hidden offshore assets by using tax amnesties. We find similar patterns in all these samples. In all cases, offshore wealth appears to be extremely concentrated at the top of the wealth distribution: by our estimates, 50% of offshore assets belong to the wealthiest 0.01% households, and around 80% belong to the wealthiest 0.1%.

When we apply this distribution to available estimates of the macroeconomic amount of wealth hidden in tax havens (Zucman 2013, Alstadsæter et al. 2018), we find that the top 0.01% richest households evade about 25% of the taxes they owe by concealing assets and investment income abroad. Throughout our research, we maintain a clear distinction between legal tax avoidance and illegal evasion. Thus, this estimate only takes into account the wealth held offshore that evades taxes; it excludes properly declared offshore assets. When we add the tax evasion detected in random audits, total evasion in the top 0.01% reaches 25-30%, versus 3% on average in the population (Figure 1).

Figure 1 The ratio of taxes evaded to taxes owed, by wealth group 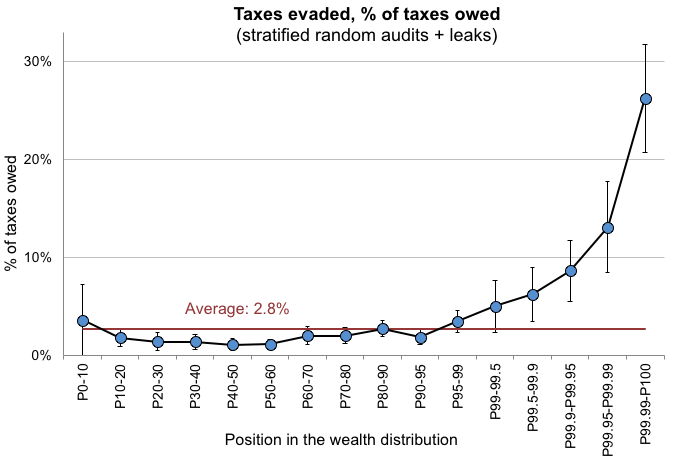 Do our findings apply to other countries? We certainly do not claim that the pattern of evasion by wealth group that we found in Scandinavia holds everywhere as a universal law. If anything, tax evasion among the rich might actually be even higher in other developed economies, given that Scandinavian economies rank among the countries with the strongest respect for the rule of law, highest tax morale, and lowestamount of wealth held in tax havens (Alstadsæter et al. 2018). Down the wealth ladder, other developed economies are likely to have low levels of evasion (like Norway, Sweden, and Denmark), because most economic activity takes place in the corporate and public sectors, where third-party reporting strongly limits tax evasion.

Why Do the Rich Evade Taxes? Because They Can

Why do the rich evade so much? Because for them tax evasion is possible: there is an industry – in Switzerland, Panama, and other tax havens around the globe – that provides wealth concealment services to the world’s wealthiest individuals. This industry typically only targets the very wealthy (people with more than $20 million or sometimes $50 million to invest), as serving too many would-be evaders would increase the risk for these banks and law firms that they would be discovered violating the law. Moderately wealthy individuals (below the top 0.1%) do not have access to these services and therefore do not evade as much tax. Further down the ladder, the majority of the population only earns wages and pension income, which cannot be hidden from the tax authority.

Because it is unevenly distributed across wealth groups, tax evasion has important implications for measured wealth inequality. In Norway, for instance, the wealth share of the top 0.01% increases by around 25% when accounting for hidden offshore assets.

Our final results relate to policy discussions on the ongoing fight against offshore tax evasion. We show that disclosures of offshore wealth under the tax amnesties were associated with sharp increases in reported wealth, capital income, and tax liabilities, but no increase in outcomes associated with legal tax avoidance. These results imply that the potential revenue gains from policies that effectively deter offshore tax evasion are considerable. Past crackdowns on offshore tax evasion mostly induced tax evaders to shift assets to safer havens (Johannesen and Zucman 2014) rather than to disclose more assets at home (Johannesen et al. 2018). However, it remains to be seen whether the most recent enforcement mechanism, automatic information exchange, can significantly reduce the supply of wealth concealment services.

To reduce top-end evasion significantly, it is key to shrink the supply of wealth concealment services. This can be done by changing the incentives faced by the law and financial firms in tax havens, for instance by applying trade tariffs to non-cooperative tax havens and steep financial sanctions to the firms found abetting tax dodging (Zucman 2015).