By Shivali Pandya, a research intern at Bruegel, and Simone Tagliapietra, a Research Fellow at Bruegel, Adjunct Professor of Global Energy at the Johns Hopkins University SAIS Europe and Senior Researcher at the Fondazione Eni Enrico Mattei. Originally published at Bruegel

The EU is currently working on a new framework for screening foreign direct investments (FDI). Maritime ports represent the cornerstone of the EU trade infrastructure, as 70% of goods crossing European borders travel by sea. This blog post seeks to inform this debate by looking at recent Chinese involvement in EU ports.

In September 2017 Jean-Claude Juncker, president of the European Commission, proposed a new EU framework for screening foreign direct investments (FDI), arguing that ‘if a foreign, state-owned, company wants to purchase a European harbour, part of our energy infrastructure or a defence technology firm, this should only happen in transparency, with scrutiny and debate’.

This proposal sparked a large debate in Europe over whether the EU should have the power to vet FDI and how this would work in practice.

In light of these events, we seek to inform this debate by looking at the figures of China’s involvement in EU maritime ports.

Maritime ports are a vital asset for the competitiveness of the European economy. With over 70% of goods crossing European borders travelling by sea, ports are indeed the gateway to the EU. European ports employ 1.5 million people and currently handle €1,700 billion-worth of goods (Figure 1). 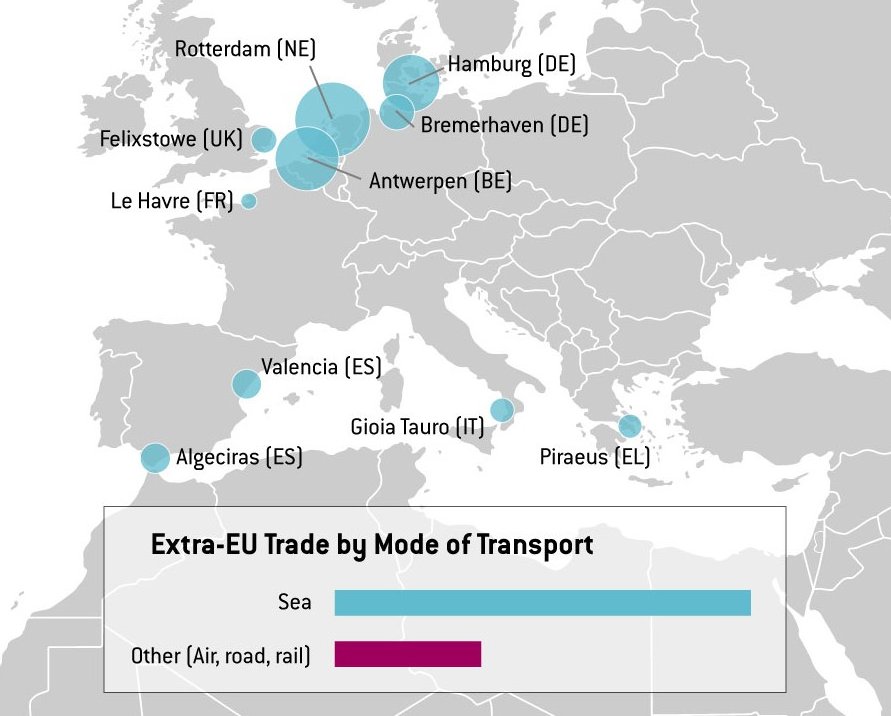 EU ports have recently caught the attention of various Chinese corporations, as China undertakes infrastructure projects around the world as part of its Belt and Road Initiative (BRI).

The BRI is an international infrastructure and trade development project led by the Chinese government in an effort to pursue greater cooperation and deeper integration of China into the world economy. It is, in the simplest sense, a vision to carry on the ‘Silk Road spirit’ – “communication and cooperation between the East and the West”.

The “Belt” includes overland transportation routes spanning Eurasia that connect China, Europe, Russia, and the Middle East. The “Road” refers to maritime routes starting in China that go on to Sri Lanka, Pakistan, the Middle East, eastern African states and eventually end in the Mediterranean Sea and northern European countries.

In 2016, the China Development Bank provided $12.6 billion in funding to BRI projects. China also set up the Silk Road Fund solely to invest in BRI ventures.

In this context, over the last decade, private and state-owned Chinese firms have acquired stakes in eight maritime ports in Belgium, France, Greece, Italy, the Netherlands, and Spain (Figure 2). 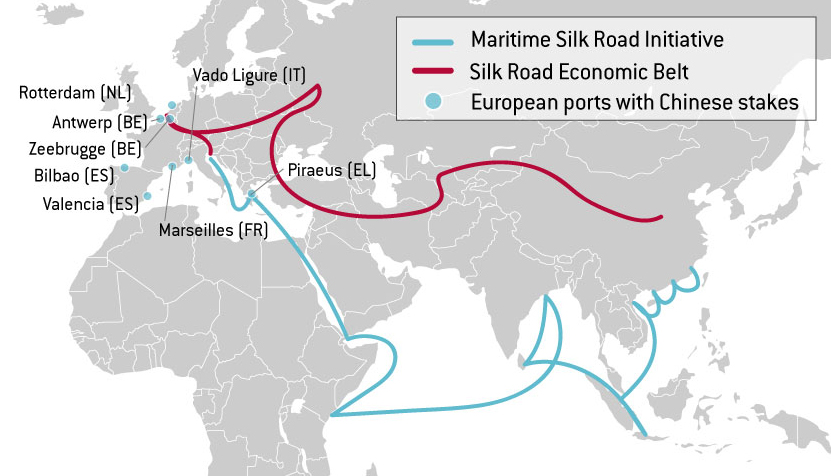 As the only multi-billion dollar port investment in the EU, the acquisition of a 35-year lease of Greece’s Piraeus Port by the China Ocean Shipping Company (COSCO), certainly represents China’s flagship project in this field.

Since its acquisition by COSCO, the port has experienced unprecedented growth due to new technology and infrastructure upgrades. In six years, port traffic grew by over 300%. Under new management and with millions of euros spent to expand port capacity, COSCO aims to have Piraeus rank as one of the busiest ports in Europe.

This major investment reflects the fact that China considers the southern and eastern European regions as strategic. The Piraeus investment indeed extends beyond the maritime port itself, as China also plans to build the Land-Sea Express Route – a network of railroad connections from the port to the western Balkans and northern Europe.

In 2013 the Piraeus port was connected to the Greek railway system, but the current railway connections in the region have fewer tracts, low travel speeds, and cannot accommodate larger trains. China’s project to establish new railway lines connecting the Piraeus with the western Balkans and northern Europe could revolutionise EU trade routes. Compared to existing shipping routes, which go around the Strait of Gibraltar, the Land-Sea Express Route could indeed decrease shipping time between China and the EU by 8-12 days.

These plans to increase rail connectivity have already attracted large companies to the Piraeus. Hewlett Packard (HP), Hyundai, and Sony have all decided to open logistics centres in the Piraeus and use the port as their primary distribution centre for shipments to eastern and central Europe, as well as to northern Africa.

HP’s decision to shift operations from the port of Rotterdam in the Netherlands to the Piraeus indicates that, with expanded rail and freight connections, Piraeus could represent a cheaper and more viable option compared to northern European ports.

Though the port of Rotterdam will likely maintain its primacy as the busiest port in Europe, the Piraeus port is set to continue to see an uptick in business upon the completion of more BRI projects.

Hungary, Serbia, and China already signed a trilateral plan to build a new railway line between Budapest and Belgrade, financed with loans from the Export-Import Bank of China. Construction has already begun in Serbia but remains stalled in Hungary due to an investigation by the European Commission, since Hungary did not open the project up to public tender until recently.

New cargo routes will require new storage and shipment centres and will bring more business to south-eastern Europe. The Land-Sea Express Route, in conjunction with other BRI projects, is thus set to enhance the role of southern and eastern European countries in the continental trade routes.

Notwithstanding these major developments, the EU remains divided over its response to the BRI. To date, only 11 EU Member States have officially joined the BRI project. Though most recognise the increasingly important political and economic relationship between the EU and China, there are still reservations over China’s motives behind the BRI and the impact it would have on domestic markets.

For instance, despite stating his support for increased EU-China cooperation, France’s president Emmanuel Macron expressed his hesitations by stating that the new “roads cannot be those of a new hegemony” and “cannot be one-way”. Germany’s chancellor Angela Merkel has taken a similar stance, pushing for reciprocity and stating her worry that economic relations will be linked with political questions.

Unlike France and Germany, Greece has warmly welcomed Chinese investment, with its prime minister Alexis Tsipras affirming Greece’s desire to “serve as China’s gateway into Europe.” In 2017 Greece blocked an EU statement on Chinese human-rights violations, further feeding into the fear that the BRI could be used by China to exercise political leverage over involved countries.

China maintains close ties in its 16+1 framework of cooperation with 16 central and eastern European countries, all of which are either EU Member States or official EU candidate countries. The 16+1 setup has been perceived by several EU leaders as a Chinese effort to undermine EU unity.

Maritime activities are already an important component of China’s economy, and the country seeks to expand its international naval presence and operations by creating partnerships with ports in which it has stakes. China also aims to ensure access to critical infrastructure and resources it will need to drive economic growth.

Given their strategic relevance, we consider that the Council and the European Parliament cannot avoid taking maritime activities into consideration during their discussions on the EU framework for screening foreign direct investments.