By Alex J. Wood, a researcher at the Oxford Internet Institute, University of Oxford. Originally published at openDemocracy 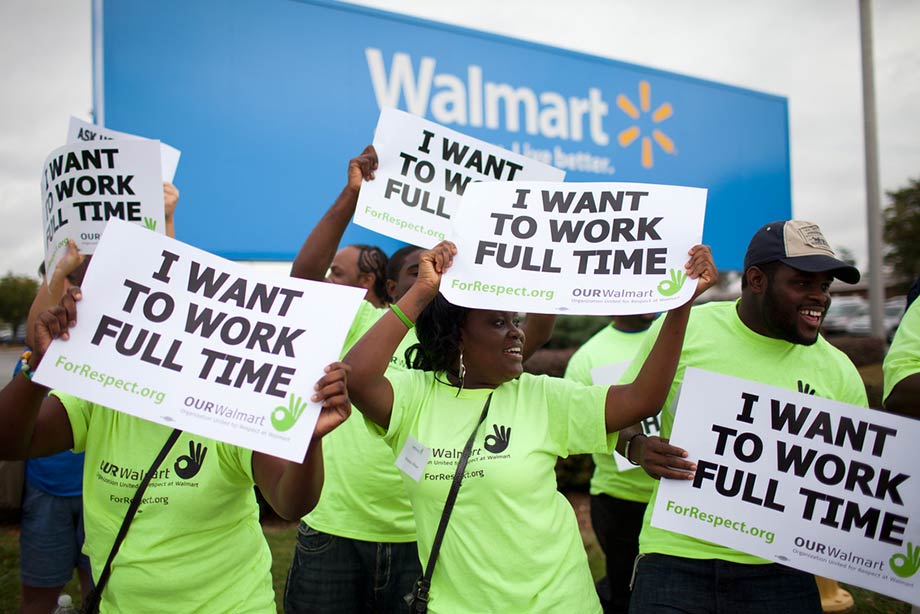 An OUR Walmart demonstration in 2011 outside the Walmart Home Office in Bentonville, Ark. Marc F. Henning/OUR Walmart/Flickr. CC (by-nc)

Across Europe trade union strength is diminishing. In many countries union membership is falling. Even where membership and collective bargaining appear robust this is mainly due to legal supports rather than unions’ retaining structural power. Sectoral agreements are being hollowed out and the problem for unions is structural. Union power in Western Europe was at its height in the 1960s – a period marked by large-scale industrial production and Keynesian economic policy. Since the 1970s new information, communication and transportation technologies have enabled networked forms of production, distribution and finance to develop in which product markets, corporate ownership and labour process are internationalised. In combination, these processes seriously undermine the possibility for effective formal collective bargaining in many sectors.

If unions in the twenty-first century are to remain relevant, they must embrace what is an ever more connected and networked world. The Fight for 15 movement in the United States provides an illuminating example of some ways in which the internet can benefit organised labour. Below I discuss three lessons which UK trade unions should take from the early stages of the low-wage worker movement which shaped the ‘Fight for $15 an hour’. This mobilisation can be traced to the founding of the Organisation United for Respect at Walmart (OUR Walmart). OUR Walmart was founded as an independent worker association in 2011 by the United Food and Commercial Workers’ (UFCW) union, a union with a broad membership of more than 1.3 million across the retail, food processing and meat packing industries. This article draws on six weeks spent participating in the campaign in California and 43 interviews with workers and union officials (for a more academic account of this work see ‘Networks of injustice and worker mobilisation at Walmart’ in Industrial Relations Journal).

At the beginning of this decade the retailer Walmart was the world’s largest private sector employer with a global workforce of 2.2 million, 1.4 million of whom are hourly paid workers in the United States. Walmart was also renowned for its hostility to organised labour and its ability to defeat unionisation attempts. However, the UFCW had identified small numbers of workers at a number of stores who were fed up with their low pay and hours, and the prevalent managerial abuse which they routinely faced, and were open to a collective attempt at improving working conditions. With the unionised retail sector coming under pressure from the growth of Walmart, the UFCW decided to try something radical: instead of running a traditional union organising campaign aimed at collective bargaining recognition, the union would support workers in forming an independent organisation with the aim of pressurising Walmart to raise labour standards. The campaign was surprisingly successful. Walmart increased starting pay to $10 per hour in its wake, improving the pay of over 500,000 workers, and in addition the local minimum wages was raised in a number of jurisdictions.

Lesson 1. The Transformative Potential of Social Media for Participatory Organisation

Social media was crucial in enabling the existence of OUR Walmart. It provided a discursive space in which workers could interact and discuss their working lives, and in doing so they were able to develop new understandings of their situation. Walmart’s extreme hostility to unions made the existence of this space outside of the workplace crucial. Walmart not only expelled union organisers from stores but also operated a workplace regime of surveillance and fear. Workers faced high levels of monitoring and the threat of being punished if caught talking about unions or collective organisation. This made it extremely difficult for workers to discuss their grievances face-to-face with each other or with union organisers. The importance of social media in framing working conditions as unjust is illustrated by Facebook posts such as:

You have to be kidding. That’s 1,000 times what an average Walmart Associate makes. . . [link]

As a consequence of the fear of retaliation, those brave enough to join OUR Walmart ended up being a small number in each store and were thus dispersed across the company’s numerous different stores and/or different shifts. Social media provided workers with the opportunity to overcome this fragmentation and connect with each other and with union organisers. Through engaging in discussions over Facebook, workers were able to learn of similarities in their experiences and provide each other with practical and emotional support. In doing so they fostered identification with each other’s situation and interests. Akira, a recently terminated worker who was working as an organiser, explained this process particularly clearly:

It is basically an outlet for, not only, frustration but also networking . . . seeing . . . what Walmart is doing now to other associates and comparing our similarities . . . just being there for one another so you know that you’re not the only one going through what you’re going through and spreading the word about trying to change Walmart and get others to join in.

Tim, a worker in his late 20s, explained how realising that their sense of injustice was shared by others had a profound inspirational effect:

You’re used to dealing with your individual store and then when you see it is nationwide and you’re talking to other people—it kinda blows your mind away. A lot of workers think that the problems they are experiencing are just this store or it’s just that manager, but everything else is great.

A sense of group identity was further fostered visually by the uploading of videos on Facebook and YouTube of speeches by charismatic leaders and totemic actions. Importantly these connections were possible despite the network being geographically dispersed across a vast country. Bill, a senior UFCW official, explained how social media massively expanded worker communication and interaction:

It’s been transformative . . . there’s thousands of conversations happening every day amongst members of OUR Walmart … this campaign wouldn’t have been possible five years ago . . . it breaks down the barriers.

OUR Walmart also made use of other internet-based forms of communication such as online video conference calls and voting apps. These online tools enabled workers from across the country to link together and discuss major issues, provide feedback and make decisions. By using a range of internet tools the mobilisation was able to take a novel participatory organisational form independent of the union.

Lesson 2. Expansive Solidarity and the Power of Reputational Damage

A further advantage of social media is that it does not entail rigid organisational or communicative boundaries. In the case of OUR Walmart this enabled an expansive form of solidarity to develop in which community and church groups, as well as other low-paid workers and labour unions and advocates could easily connect to the mobilisation without themselves needing to be formal members of OUR Walmart. For example, social media enabled traditional and self-generated coverage of these actions to be widely disseminated. OUR Walmart claims there were over 300,000 posts on Facebook and 60,000 tweets on Twitter regarding their 2012 ‘Black Friday’ strike. Facebook ‘Events’ facilitated spreading the word about the dozens of disparate but simultaneous actions which workers undertook as part of the campaign and meant that significant solidarity was mobilised both physically and financially. For example, the sheriff’s department reported that at the main 2012 Los Angeles demonstration, there were around 1,000 supporters.

The interconnection provided by social media enabled the amplification, coordination and aggregation of dozens of small disparate simultaneous actions. In sum this provided workers with a new form of collective voice: reputational damage. As two union organisers explained:

Our goal is not to go to election and then [legally] represent but to get Walmart to publicly commit to certain standards – Jenny, union organiser

We are much more about taking direct action… and doing something about it now rather than waiting for the law [i.e. holding union certification elections] to do something – Ali (union organiser)

The force multiplier effect of social media meant that a relatively small number of workers were able to cause significant reputational damage to Walmart. For example, the 2012 ‘Black Friday’ strike only involved around 600 workers out of a workforce of over a million. Nevertheless, working conditions at Walmart gained a significant level of media coverage. For example, during November 2011, the only coverage relating to working conditions at Walmart in the New York Times amounted to just 57 words in one article, whereas during November 2012, there were 2,089 words across six articles. According to a senior UFCW official, the print and website coverage generated by OUR Walmart alone was equivalent to $24 million of advertisements in 2012 and $31 million in 2013. As Michael Bender, president of Walmart West, put it:

the media coverage created the illusion that Walmart’s associates were protesting instead of serving customers.

Lesson 3. Don’t Bureaucratise Communication but Be Aware of Surveillance

Key to this mobilisation was the fact that the union did not attempt to use social media in a traditional hierarchical manner based around vertical downwards communication. Instead, the union acted as a facilitator of network participation, seeking to increase the bottom-up communication. Network forms of organisation do not require total autonomy but rather an orchestrator which can provide strategic oversight. This means that the orchestrator union must not attempt to bureaucratise communication and instead limit itself to allowing the quick and easy sharing of information across the network.

OUR Walmart demonstrates how, despite the union being necessarily bureaucratic, it was still possible for it to engage with networks in a horizontal manner.  Although the UFCW played a vital role in the decision making of the mobilisation, it did not do so in a bureaucratic manner. Instead, the network’s meetings, whether online or in person, were run in a participative manner, departing from the formal process-heavy manner typical of union meetings. Union organisers played the role of facilitators, actively seeking out workers’ views and encouraging participation. The result was that membership was experienced as empowering and workers felt ownership of OUR Walmart and the decisions it made.

Another important role for unions is in providing workers’ protection from the risks entailed by such campaigning. For despite the potential of social media to renew the labour movement, the internet is not a neutral space; its infrastructure, especially social media platforms, is largely shaped by a corporate logic which can enable surveillance. Walmart hired Lockheed-Martin to analyse social media dataduring the OUR Walmart campaign with many worker activists consequently being fired. Unions then must not only make greater use the internet but must also to take on a greater role in fighting for data justice.