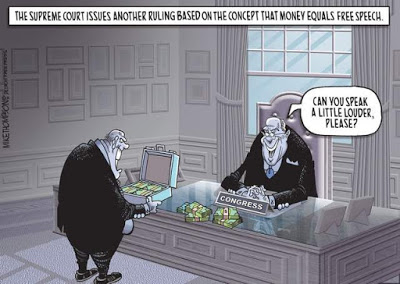 Like “swing vote” Justice Sandra Day O’Connor before him, “swing vote” justice Anthony Kennedy has been one of the worst Supreme Court jurists of the modern era.

With swing-vote status comes great responsibility, and in the most consequential — and wrongly decided — cases of this generation, O’Connor and Kennedy were the Court’s key enablers. They

Each of these points is critical in evaluating the modern Supreme Court. For two generations, it has made decisions that changed the constitution for the worse. (Small “c” on constitution to indicate the original written document, plus its amendments, plus the sum of all unwritten agreements and court decisions that determine how those documents are to be interpreted).

These horrible decisions are easy to list. They expanded the earlier decision on corporate personhood by enshrining money as political speech in a group of decisions that led to the infamous Citizens United case (whose majority opinion, by the way, was written by the so-called “moderate” Anthony Kennedy); repeatedly undermined the rights of citizens and workers relative to the corporations that rule and employ them; set back voting rights equality for at least a generation; and many more. After this next appointment, many fear Roe v. Wade may be reversed.

Yet the Court has managed to keep (one is tempted to say curate) its reputation as a “divided body” and not a “captured body” thanks to its so-called swing vote justices and the press’s consistent and complicit portrayal of the Court as merely “divided.”

The second point above, about the illusion of the Court’s legitimacy, is just as important as the first. If the Court were ever widely seen as acting outside the bounds of its mandate, or worse, seen as a partisan, captured organ of a powerful and dangerous political minority (which it certainly is), all of its decisions would be rejected by the people at large, and more importantly, the nation would plunged into a constitutional crisis of monumental proportions.

We are in that constitutional crisis now, but just at the start of it. We should have been done with it long ago. Both O’Connor and Kennedy are responsible for that delay.

O’Connor’s greatest sin, of course, was as the swing vote in Bush v. Gore, the judicial coup that handed the 2000 election to George W. Bush and Dick Cheney. It was also widely reported that on election night at a dinner party “Sandra Day O’Connor became upset when the media initially announced that Gore had won Florida, her husband explaining that they would have to wait another four years before retiring to Arizona.” (More on that here.)

Consider: If the Supreme Court were part of coup that makes a losing presidential candidate the winner, and makes that ruling along partisan and preferential lines that can’t be judicially defended, how could any decision issued by that court be deemed legitimate afterward?

Yet here we are, still publicly asserting the Court’s legitimacy, whatever people think privately, and still watching in horror as decision after decision dismantles old constitutional agreements and erects new ones.

The Legacy of Anthony Kennedy

Kennedy will be praised for his so-called “moderate” or “case-by-case” ideology, bolstered largely by decisions protecting gay rights. Perhaps that will be his legacy.

But in the main he has been horrible, a record of ideological and indefensible votes capped by his landmark decision in the Citizens United case. Enough has been written about that to make repetition here unnecessary. As noted, Kennedy not only provided the crucial “swing vote,” he also wrote the majority opinion, which in essence, reduced the broad and complex sweep of both public corruption and the appearance of corruption only to provable, documented, evidence-based quid pro quo exchanges. This is beyond naïve and touches itself the broader meaning of corrupt.

If justice exists in the world, his legacy will be this: First, in giving to Donald Trump the ability to hand a person of relative youth the fifth and deciding Republican vote on the Court, Kennedy has changed the Court for a generation. After his successor is confirmed, no good thing will come from the Court for the next 20 years, and much, perhaps fatal, damage will be done.

Second, thanks to Kennedy’s handing his seat to Trump, the next new justice will be unable to claim the propagandistic “swing vote” mantle held by O’Connor and Kennedy, which fact should destroy the Court’s perceived, illusory legitimacy forever. The full consequences of loss of legitimacy will be considered elsewhere, but suffice it to say that when a nation’s highest court is not just captured, but widely seen to be captured, a constitutional crisis is at hand.

This is the legacy Justice Anthony Kennedy, and though he may bask for the next few months in the glory of his pronounced moderation, the awful truth, to his enduring shame, should follow him to the grave — and be printed on it.

The Crisis to Come

Let’s close by quoting Anthony Kennedy in the Citizens United case, the most bizarre defense of a decision in the modern era. (There have been many bizarre decisions — the “money is speech” decision in Buckley v. Valeo is among the worst in the last 50 years, but none has been as bizarrely defended by the Court as Citizens United.)

To the objection that unlimited campaign contributions would foster widespread public corruption, Kennedy countered with this absurdity (quote taken from Jonathan Cohn here). In his majority opinion, Kennedy wrote:

[W]e now conclude that independent expenditures, including those made by corporations, do not give rise to corruption or the appearance of corruption. …

The fact that speakers [i.e., donors] may have influence over or access to elected officials does not mean that these officials are corrupt. …

The appearance of influence or access, furthermore, will not cause the electorate to lose faith in our democracy.

Each assertion above strains belief that the writer is sane. Consider those assertions in simpler language:

The obvious explanation is the latter.

But the worse of his assertions may be the fourth, which is also patently wrong. That assertion, which says in effect “and people will let us get away with all these changes,” has set the final table for the constitutional crisis to come — the one that questions the legitimacy of the Court itself and with it, perhaps, our entire political process.

That crisis, if it comes, will threaten the national fabric as fundamentally as any of the earlier three — the crisis of 1776, the crisis of 1860, and the Great Depression. We’re now much closer to that point than anyone with a microphone or media column inches will say. But you did hear it here. Stay tuned.