I am a blogger. It is my job to blog, which I’ve been doing on a daily basis since 2003. Reading and writing is what I do all day. I’m lucky to be able to survive doing it, and I’m happy to be doing it[1]. I hate Google because it tries to make me a stupid reader. I hate Twitter and Facebook because they make me a stupid writer. I’ve been wanting to get this off my chest for some time, so allow me to explain.

Let’s where I start, with reading. As a blogger, I need to process and filter enormous amounts of newsworthy content hours a day, every day (as does Yves). I am like an enormous baleen whale nourished by krill. So here is how the insanely stupid and wasteful Google News helps me — and you, dear readers! — do this: 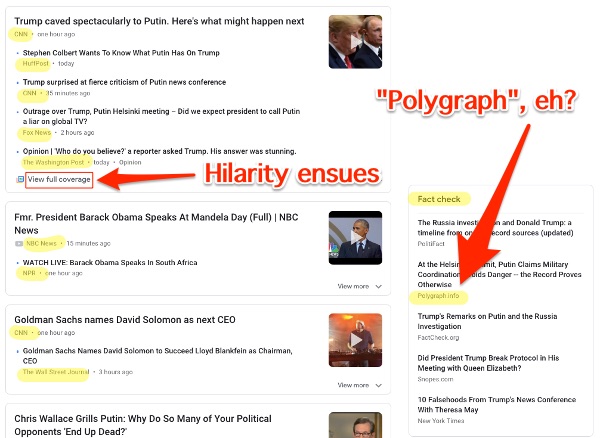 (I’ve erased the Weather box at top right, which is Google’s little way of letting me know it’s tracking my location even though cookies are off.) First, look at the page, which is a complete screenful on a laptop (i.e., on the screen of professional content creator who values his time, not a teensy little cellphone screen). In the news links column at left, there are a grand total of nine (9) stories. Please, can we get the steam-era list of blue links back, where we could scan 30 or 40 headlines in a single second’s saccade? And note the sources: CNN, HuffPost, Fox, WaPo, NBC News, NPR, CNN, and the WSJ. This is an ecoystem about as barren as my neighbor’s lawn! (And if you click on the laughingly named “View full coverage” link, you’ll see a page just as empty and vacuous though slightly less barren, with more obcure sources, like Reuters. Or Salon.) You will also note the obvious way in which the page has been gamed by gaslighters and moral panic engineers, who can drive every other story off the front page through sheer volume Finally, you’ll note that the fact checkers include organs of state security, in the form of polygraph.info, “a fact-checking website produced by Voice of America (VOA)​ and Radio Free Europe/Radio Liberty.”

Now let’s try to use Google News for search. (I find Google proper, though still crapified, better for news, especially if I limit the search by time.) I chose “start treaty,” for obvious reasons. Here is the results page: 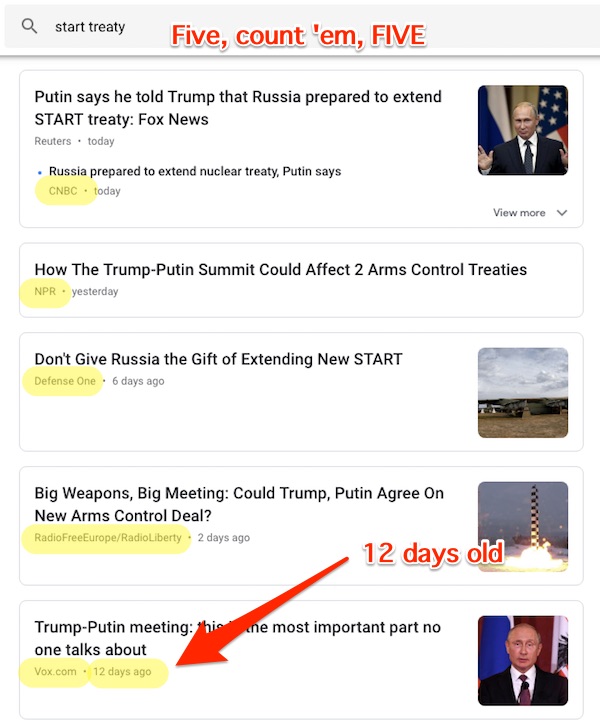 Yes, on a complete, entire laptop page, there are in total five (5) hits, 3 from the impoverished ecosytem noted above, and one from an organ of state security (RadioFreeEurope/RadioLiberty). The last hit, from Vox, is twelve (12) days old. Surely there’s something more current? Note also the random ordering of the hits: Today, yesterday, 6 days ago, 2 days ago, 12 days ago. (There is, of course, no way to change the ordering.) A news feed that doesn’t organize stories chronologically? That doesn’t surface current content? What horrible virus has rotted the brain matter of the Google engineers who created this monstrosity? And one more thing: 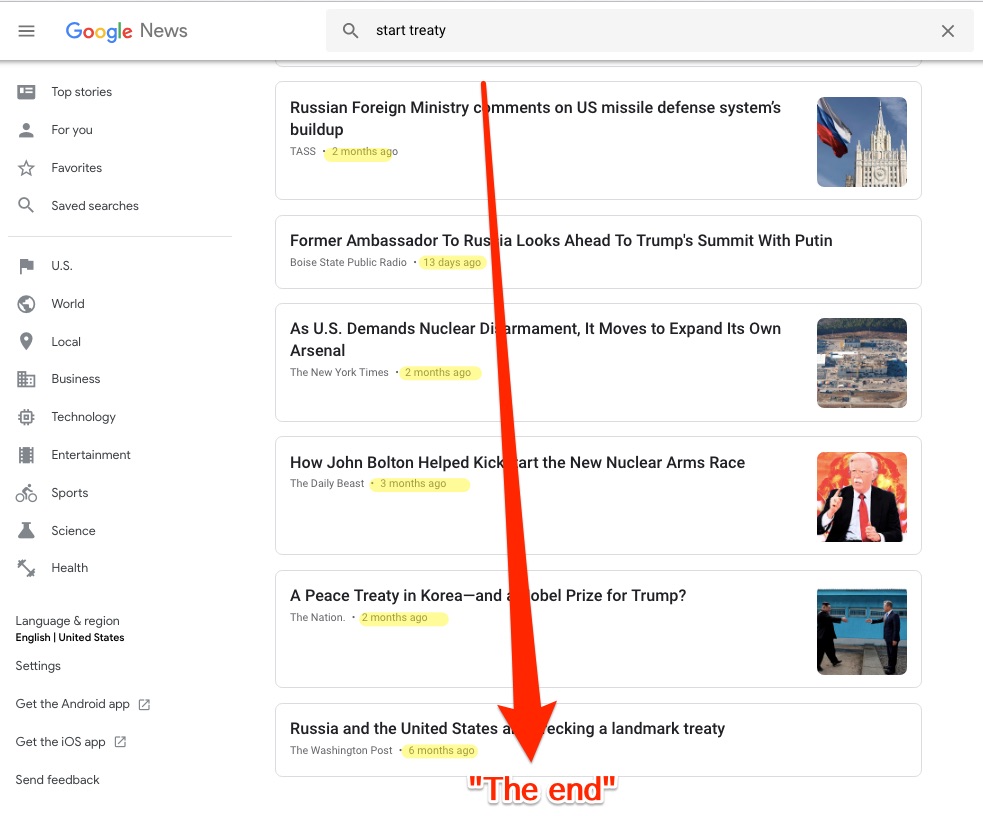 Famously, the normal Google search page ends with “1 2 3 4 5 6 7 8 9 10 Next.” Crapified though Google search results are, if you spend some time clicking and scanning, you’ll generally be able to come up with something useful five or ten pages in, maybe (if you’re lucky) from a source you don’t already know exists. Not so with Google “News.” When the page ends, it just ends. When the algo has coughed up whatever hairball it’s coughed up, it’s done. No more. Again, this is news? What about the same story a week ago? A month ago? What does “our democracy” have a free press for, if Google gets in the way of being able to find anything?

So, the Google News experience is so vile and degrading in its stupidity and insolence that I use another tool for reading the news: Twitter. And despite its well-deserved reputation as a hell-site, Twitter — carefully curated — does the job, as long as you don’t ask too much of it, like news that’s more than a month or so old. My beef with Twitter is not as a reader, but as a writer. Here is how you create a tweet in Twitter: 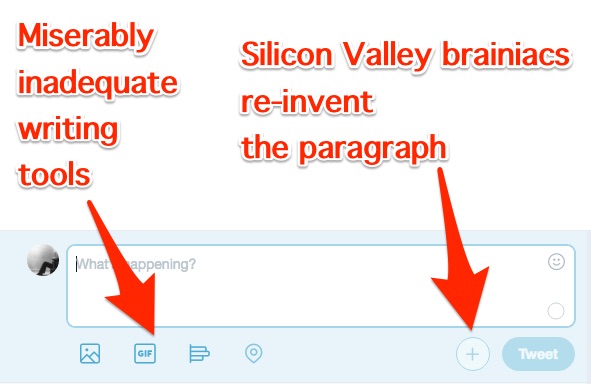 I’ll have a sidebar on those miserably inadequate writing tools, at left, in a moment. For now, look at the bottom right: Those disruptive Silicon Valley engineers have innovated the paragraph: 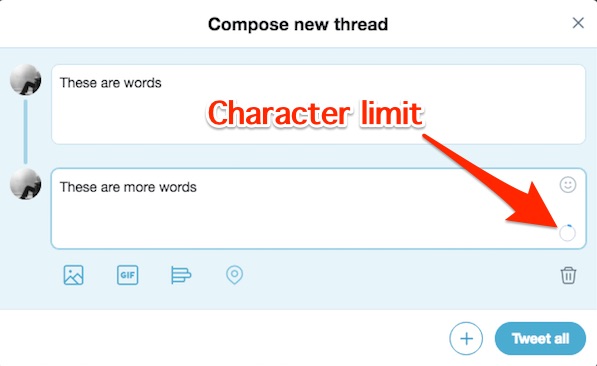 Here, I remind you of the steam age of Blogger, where you could — hold onto your hats, here, folks — create a post, composed of paragraphs — or, if you were a poet, lines; or an artist, images and captions; or an accountant, tables — all with at least some degree of “flow” and ease. You could even have subheads, to divide your content into sections! The billionaire brainiacs at Twitter have managed to create that first, minimal functionality — the paragraph — but without the ability to re-arrange, or even to edit your paragraphs after posting! Does Jack laugh alone at night?[2].

Sidebar. Here is what an editor that is not miserably inadequate looks like. A real editor: 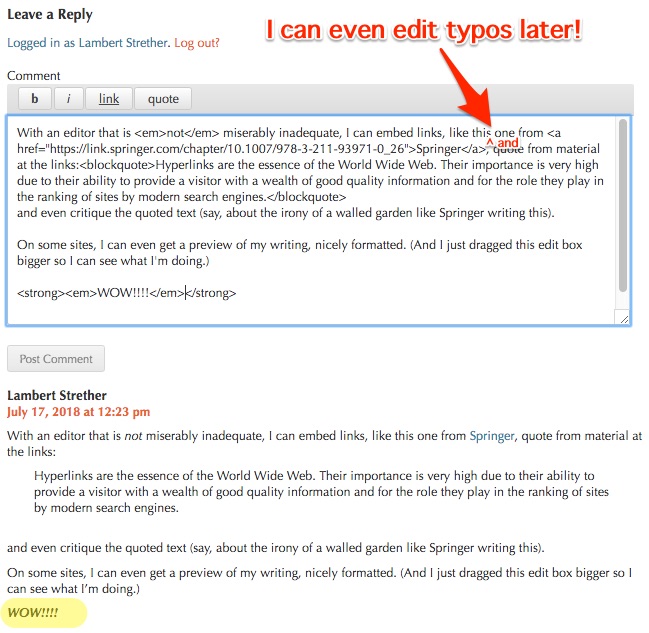 Yes, readers, a tiny blog like this one — whose only virtue is an ability to take scalps in the financial industry — provides, as you can see, far better writing experience, with more powerful tools, than Twitter (or, as we shall see below, Facebook). Tags! Now, bold and italic tags I can live without (unless I want to treat them as implicitly semantic tags for headings and titles, respectively). But the paragraph (&lt;p&gt;), link (&lt;a&gt;) and (&lt;blockquote&gt;) tags enable you, as a writer, to express your critical thinking skills and provide evidentiary back-up for the claims you make, exactly as footnotes — perhaps Humanities’ greatest invention — do in works of scholarship. Indeed, when I was a mere prat, in 2003, debunking the last great gaslighting episode our political class ginnned up, they enabled an editorial formula that we called “the media critique.” The formula looked like this:

Rinse, repeat. (You can see the same structure when Yves tears apart a CalPERS presentation.) Twitter (and Facebook) make the media critique difficult or impossible because they don’t provide the edit tools to make it easy. (The tags are not in a toolbar. The platforms don’t even recognize them when you type them in.) Do you think there could be a reason for that? This wouldn’t matter so much if countless thousands of writers — activists and organizers, especially — didn’t use Silicon Valley platforms for their work. But they do. How well is a movement without the tools to write critically going to do? A question that answers itself once asked.

End sidebar. Now we turn to the loathesome Facebook, which I haven’t used for about a year, thankfully. Here’s the login screen: 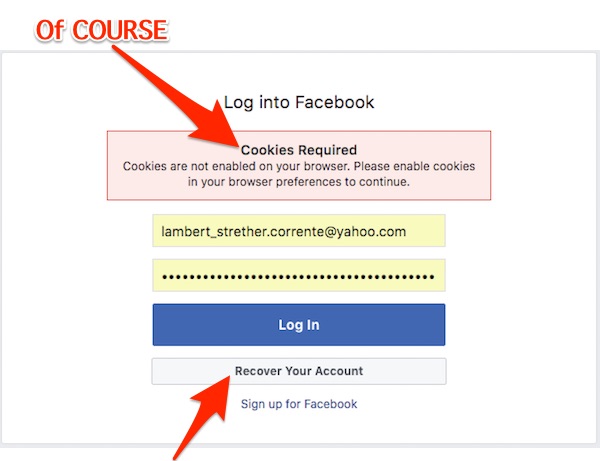 OK, cookies to sell me to data brokers, I get it. And apparently I’m not the only Facebook expat, which I for one find encouraging. Now to Facebook’s editor: As you can see, it’s as miserably inadequate as Twitter’s and for the same reasons, technical and (no doubt) political[3]. But to a writer Facebook is uniquely insulting and degrading, first because the big type of the default text and the small size of the edit box both drive me to post material that’s not even short form. Worse is the space devoted to an entire menu bar of buttons for cute backgrounds, instead of a menu bar of writely tools, like links, and blockquotes, and paragraphs. And you can’t even drag the modal dialog box bigger!

What frosts me above all else is the disrespect that Google, Twitter, Facebook show to their billions of ordinary users. All readers should be empowered to research as deeply as they like. And all readers should also be empowered to become writers, and powerful edit tools that enable the expression of critical thought should be made available to them. Democracy is good! But the squillionaires of Silicon Valley think very, very differently.

[1]For a brief, shining moment from 2003-2006, the then (liberal/left) “blogosphere” thought it could replace the mainstream media. That moment died when a critical mass of top bloggers decided they wanted to join the media, not replace it. Some of us soldiered on.

[3] Many brain-damaged programmers believe that content is data, without internal structure, which can be dumped into a database field. The engineers who butchered Twitter and Facebook’s edit tools probably thought that way. And don’t @ me that doing the right thing would be h-a-a-a-r-d. These guys are the ones with the billions to crack the problem, including performance.