This is not the prettiest garden I’ve ever had, sadly; although it suits my purposes admirably, as we shall see. I went out around 5:00 this afternoon and took photographs of it, some of which you see below.

I started gardening in 2006-2007, when first my personal economy collapsed, and then the entire economy. So I concentrated on learning how to grow vegetables in case I needed to feed myself, and learned something of permaculture. However, I gradually discovered that what I really enjoyed about my garden was not growing vegetables, especially since vegetables mean work — I don’t like work — even when sheet-mulched, but sitting in it while working. Here is a frontal view of my office: Running that orange power cord from the house, across the garden, to a “desk” so I could plug in my laptop is one of the best things I’ve ever done for myself; I encourage those of you who work from home on laptops to try it. (Note that although the sun keeps the air warm, I have arranged to sit in shadow, so I don’t get reflections on the screen. Sometimes if I get up too early, I have to drag the desk to follow the shadow around, but who wants to get up early?) The shovel at left, behind the man-bag, I keep there to dispose of any gifts left for me by the cat. 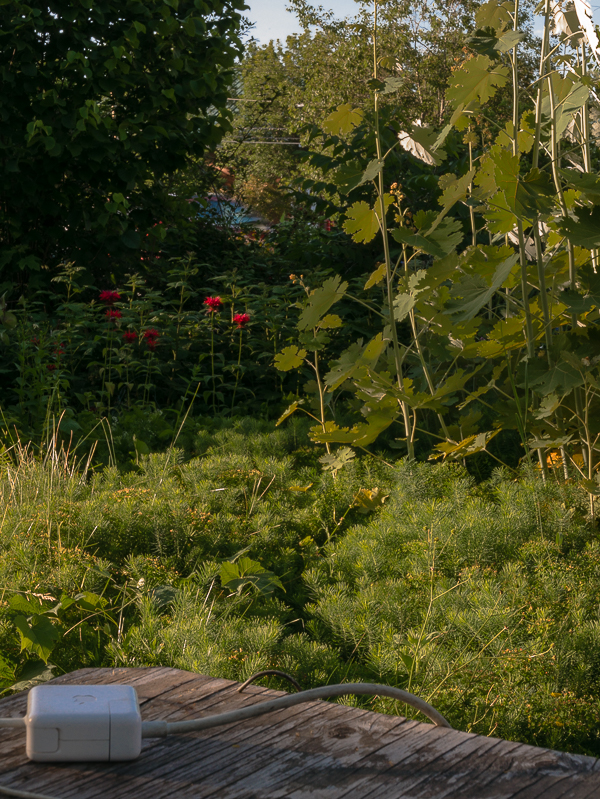 Here is a view of the garden from my desk; this is what I see when I look up from the screen. In past years, I’ve counted as many as twenty-three species of flowers from this vantage point, but my ecology is simpler this year. However, the original garden design is still holding up: In the background, the filbert trees and raspberries are providing both food and privacy (and in the case of the raspberries, protection, from the prickles). You can see the blur of a passing car between the trees in the background, but it’s very doubtful they noticed me. And we have our invasive species: I forget what the spiky plants in the foreground are, but the red flowers are bee balm; hummingbirds like it, and I saw my first one the other day. Birds are happy with my garden, despite the presence of a predator; birds love a mess. I hear them singing throughout my workday. 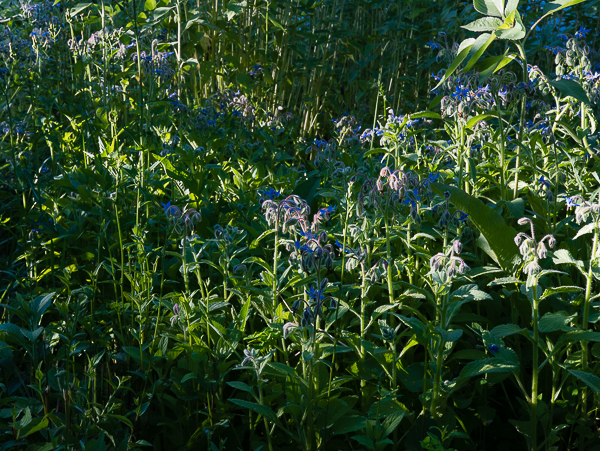 Here is a “mass of color,” in this case the blue flowers of borage, which has happily invaded what used to be the vegetable beds. Here is another mass, of basil, another invasive species. The sunflowers at right are self-seeded; I have a lot, but most have not yet flowered. My principle is to see which plants appears, each year, and then either leave them alone, weed them, or move them. Here, I transplanted some Black-Eyed Susans from a patch near my desk, because they’re one of my favorite flowers and I want them to propagate; they had a dieback last year, for some reason. 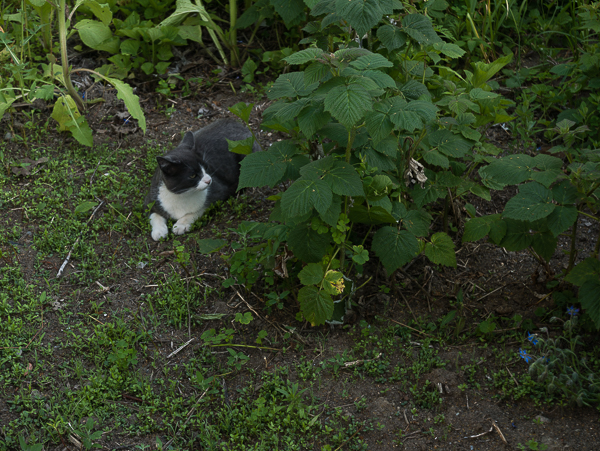 Here is the cat, visibly posing in what used to be a sheet-mulched vegetable bed. Unfortunately, last year an unruly tenant ran his dirt-bike over the beds, ruining them; I didn’t feel like rebuilding the beds, and so I abandoned vegetables entirely. Here, I ripped out an enormous quantity of weeds to expose the soil, and then scattered wildflower seeds, which have sprouted as you see. In about four or five more weeks I should have a pollinator-friendly patch of flowers, some of which I hope will reseed themselves. You can also see borage, raspberries, and violets; I have lots of them. 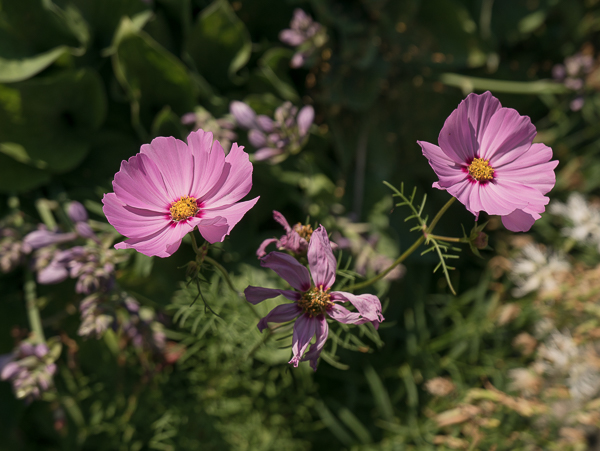 I forget what these flowers are; I bought them at the Farmer’s Market. 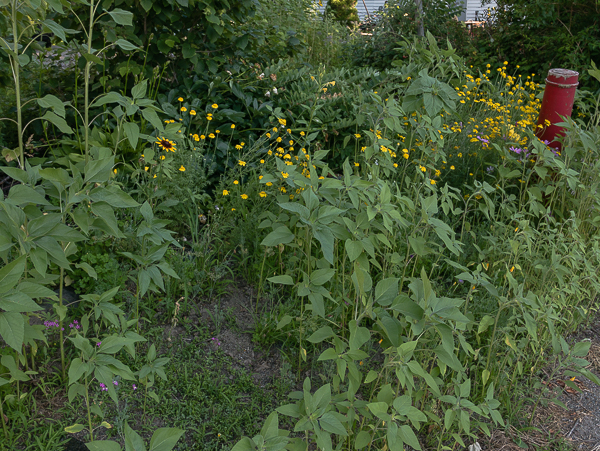 Stage One of my gardening every year is to get the beds going that are next to the sidewalk where the church ladies walk past; I don’t want to give rise to comment in the town (the central function of these beds). You can catch a glimpse of my desk in the sunlight at top right; and in front another mass of self-seeded sunflowers, a patch of wildflowers that’s sprouted, with some grass I haven’t pulled; a few orange self-seeded poppies, shut for the evening; those yellow thingamajigs that are, I think, a weed but are really fighting their corner hard; peonies; filberts; hostas… The flowers whose name I forget… The whole arrangement is quite pleasant to look at. 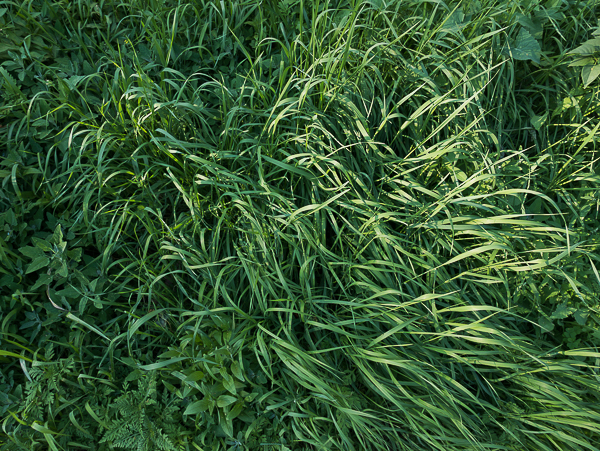 Quack grass. After I weed-whacked the area. Maybe I should plant some sort of wheat here; even though wheat is a grass, it would still be better than this horrid stuff!

* * *
All in all, an inordinate amount of pleasure for very little investment in money or labor. I heartily recommend gardening. How is your garden coming?