When we think about what determines an economy’s productivity, typically what comes to mind are technology, workforce skills, or management practices. But an important determinant that receives less attention is resource allocation.

Market economies continually reallocate resources, such as workers, to more efficient patterns of production and exchange. For example, behind the net job growth numbers are the flows of jobs between businesses. This job reallocation is the sum of jobs created by expanding (and entering) employers, plus jobs destroyed by those that are downsizing (and exiting). A high pace of job reallocation is costly to workers and firms, but it reflects continual movement of resources away from low-value or unproductive activities toward higher-value ones.

Distorting or slowing down this process can have a negative effect on productivity. We find evidence that this process has slowed down noticeably since the year 2000, with an implied drag on aggregate productivity.

The Slowdown in Job Reallocation

Previous research has found a decline in the pace of job reallocation in the US since the early 1980s. Causes include changing patterns of worker turnover (Hyatt and Spletzer 2013), reduced migration (Molloy et al. 2017), an ageing work force (Engbom 2017), and less entrepreneurship (Decker et al. 2014).

Figure 1 shows job reallocation for selected sectors. A striking feature of reallocation data, which we highlight in Decker et al. (2016), is the contrast between the overall economy, in which reallocation has declined steadily for decades, and the high-tech sector, where reallocation was flat or rising before it began declining in the 2000s. 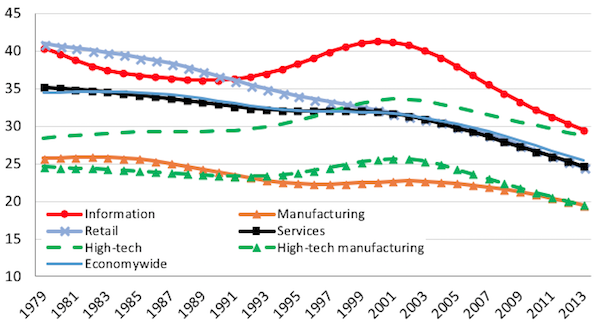 Job reallocation is costly for firms and workers, so a decline in reallocation may improve welfare. In the retail sector, for example, the shift from ‘mom and pop’ firms to retail chains has led to greater firm stability and higher productivity. Other shifts in business model may have similar effects. On the other hand, evidence suggests that much reallocation is increases productivity, so whether the patterns of reallocation in Figure 1 have been detrimental to productivity depends on what caused them.

In recent research (Decker et al. 2018), we shed light on this question by applying insights from canonical models of firm dynamics with adjustment frictions. These models propose two alternative hypotheses for explaining the decline in job reallocation:

Standard models provide convenient empirical predictions that allow us to distinguish between these alternative hypotheses:

Figure 2 shows the standard deviation of firm-level revenue per worker for young and mature high-tech and non-tech firms in the US. Labour productivity dispersion has been gradually increasing. We also use manufacturing data starting in the 1980s that show gradually rising total factor productivity (TFP) dispersion.1 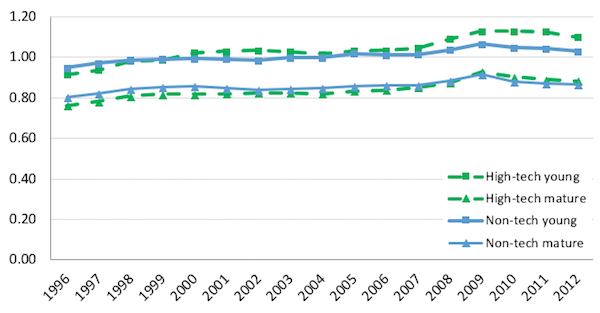 Investigating the Decline in Responsiveness

We calculate this for different types of businesses (young and mature, high-tech and non-tech) and different time periods (1980s, 1990s and 2000s). During the 1990s, employment in establishments of high-tech young firms that were one standard deviation above their industry’s TFP average grew by 16 percentage points more in a year than the industry average.

Source: Authors’ calculations from the LBD, the ASM, and the CM.
Note: Young firms are less than five years old. High-tech is defined as in Hecker (2005). Growth rate of plant with TFPR one standard deviation above industry mean vs industry mean.

Rising labour adjustment costs and frictions are not the only potential explanation. An increase in market power of firms or rising prevalence of winner-takes-all competition would be likely to reduce responsiveness, but it would not affect productivity dispersion in standard models. If technological diffusion across firms was slower (as argued by Andrews et al. 2015), this may produce rising dispersion of output per worker, but slower diffusion alone would not explain weakening business-level responsiveness.

The Effect on Productivity

Source: Author calculations from the LBD, the ASM, and the CM.
Notes: Figure depicts diff-in-diff counterfactual from TFPR concept. High-tech is defined as in Hecker (2005).

To interpret Figure 4, consider the high-tech line in 2010. The value of -0.02 implies that, given the actual distribution of establishments’ size and productivity in 2009, aggregate (industry) productivity in 2010 would have been about 2% higher if productivity responsiveness were still at 1980 rates.

This timing is similar to the timing of US productivity growth generally. Fernald (2014) documents the productivity acceleration of the late 1990s and slowdown of the mid-2000s, which was concentrated in IT-using and producing industries.

Discovering the cause of changing patterns of job reallocation is important. These patterns have significant implications for aggregate productivity and living standards. Our investigation suggests that researchers should focus on potential sources of rising adjustment frictions. These could include any policies or other factors that raise the cost of, or reduce the incentive for, hiring and downsizing.

Authors’ note: We thank Cathy Buffington for helpful comments. Any opinions and conclusions expressed herein are those of the authors and do not necessarily represent the views of the US Census Bureau or of the Board of Governors of the Federal Reserve System or its staff. All results have been reviewed to ensure that no confidential information is disclosed.