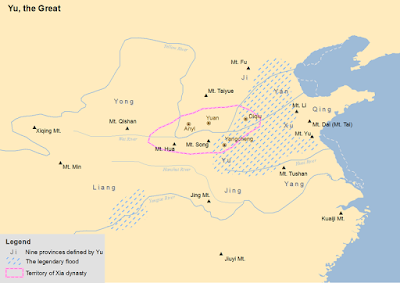 The legendary, pre-historic “great flood of China,” which was said to have lasted several generations. The flooded area to the east is roughly what is now called the North China Plain, one of two Chinese breadbaskets. Chinese civilization starts from this region. The smaller flooded area on this map is in the Sichuan Basin, China’s other major growing region. (The circled area is thought to be the territory of China’s first dynasty, the Xia, said to have rule there starting about 2200 BC.) Image credit: SY – Own work, CC BY-SA 4.0, link.

It’s common among a certain group of historians to call the 20th century “the American century,” named for the political superpower that dominated it. Americans especially revel in the phrase.

The term [“the American century”] was coined by Time publisher Henry Luce to describe what he thought the role of the United States would be and should be during the 20th century. Luce, the son of a missionary, in a February 17, 1941 Life magazine editorial urged the United States to forsake isolationism for a missionary’s role, acting as the world’s Good Samaritan and spreading democracy. He called upon the US to enter World War II to defend democratic values.

It is in this spirit that all of us are called, each to his own measure of capacity, and each in the widest horizon of his vision, to create the first great American Century.

That was written before Pearl Harbor, but the phrase endured throughout the post-war world of American hegemony, as Luce’s dream of global freedom was snuffed out by America — deliberately and repeatedly, in Guatemala, Iran, Vietnam, Chile and a dozen other countries — so that American hegemony, not global freedom, could remain the order of the day.

China, recovering from a century of humiliation and foreign domination, has risen fresh from its own colonial wounds and seeks to reverse American hegemony, to make the 21st century a “Chinese century,” an outcome Americans fear, of course, and the U.S. government claims to work to avoid.

Americans should have no fear of a Chinese century. The one we’re in will not be a Chinese century, any more than it will be anyone else’s. In fact, I can predict with confidence that unless this species gets global warming under control, China will not even be territorially intact by the end of the 21st century. (For the same reason — its many mountain ranges — neither will the United States.)

Consider the North China Plain, one of China’s two breadbaskets. As I wrote in 2015:

In a world without a climate crisis, China will win economically. The U.S. has already, as part of an unspoken national economic policy, handed China control of the world’s manufacturing, in exchange for major additions to American CEO bottom lines, like Phil Knight’s at Nike. Put simply, U.S. national economic policy is to make China and Phil Knight rich at the expense of most Americans. Both China and Phil Knight have taken that deal.

But in a world with a climate crisis, the North China Plain is at risk. If 45°N latitude is roughly the cutoff for livability in the latter half of the 21st century (sorry, can’t find the link), Beijing at 39°N will boil, as will the North China Plain, directly south of that.

The deadliest place on the planet for extreme future heatwaves will be the north China plain, one of the most densely populated regions in the world and the most important food-producing area in the huge nation.

New scientific research shows that humid heatwaves that kill even healthy people within hours will strike the area repeatedly towards the end of the century thanks to climate change[.]

At just 50 meters above sea level, the North China Plain will also flood, as this National Geographic map, from their piece “What the World Would Look Like if All the Ice Melted,” illustrates: 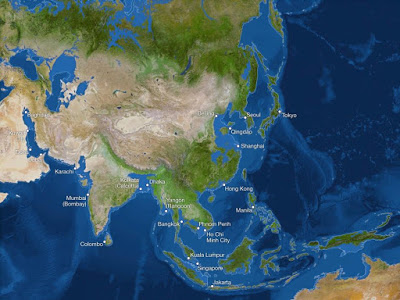 Asia after all the ice melts. Everything blue is water (click to enlarge).

China’s other breadbasket, the Sichuan basin, will likely fare no better, as it sits even further south. Climate models predict average temperature in the Sichuan Basin will increase 4°C (7.6°F) from the start of this century to the end, with an increase in the number of extreme heat waves of the kind we’re seeing this summer in the U.S. and elsewhere:

Not only has Britain sweltered in the five-week heatwave that finally ended last Friday, record-breaking heat has subjectedNorway, Sweden and Finland to unheard-of temperatures – above 32C, that’s 90F, recorded 60 miles north of the Arctic Circle. Meanwhile in Ouargla, a Saharan desert city in Algeria, a temperature of 51.3C (124.2F) recorded on 5 July is thought to be the highest ever reliably measured in Africa. And so in Japan, and so in Greece, and so in Canada: all over the northern hemisphere, record-breaking heat.

There will be no Chinese century. Should we fail to bring our climate, and our billionaires, under the people’s control, this century will be no one’s century at all, not even the billionaires’. After all, those billionaires, far from planning our joint survival, are busy instead plotting their own escape.

ADDED: I can’t imagine why people who look into the future, seeing better smart phones, smarter door locks, driverless cars, the next big thing only bigger, don’t see this, don’t factor in the tsunami that even now wets their faces. But it’s clear they don’t. I guess the day they do is the day we might make progress. We’re certainly not making it now.