By Alex Randall, who coordinates the Climate and Migration Coalition – a network of refugee and migration NGOs working together on climate-linked migration and displacement. Originally published at openDemocracy

Of course this is nonsense. Not everyone who opens that hatch and sees themselves looking back is equally dangerous. We are not all equally responsible for destruction of the world’s ecosystems. Some humans who open the hatch probably are responsible for a great deal of destruction. Other are not. Many people bear the brunt of someone else’s destruction.

The idea that all humanity is equally and collectively responsible for climate change – or any other environmental or social problem – is extremely weak. In a basic and easily calculable way, not everyone is responsible for the same quantity of greenhouse gasses. People in the world’s poorest countries produce roughly one hundredth of the emissions of the richest people in the richest countries. Through the chance of our births, and the lifestyle we choose we are not all equally responsible for climate change.

But we are not all equally responsible in a more fundamental way. Some people through the power they wield, have stood in the way of halting climate change. Not because they were stubborn or incompetent or failed to understand the seriousness. But because they acted in pursuit of a fundamental re-organising of our economies during the 1970s and 80s. And this shake-up militated against the kinds of policies and government intervention that might have halted – or at least slowed – climate change.

This is the point that is missed in ‘Losing Earth’, the New York Times’ 30,000 word feature on climate change. The piece charts the failure of the US government to act on climate change between 1979 and 1989. During this period we knew enough about the issue to act, but didn’t. The piece sets out to explain this failure.

‘Losing Earth’ presents the failure as one of political tragedy. Politicians and policy makers simply couldn’t agree. Not because of the undue influence of lobbyists, but because – as humans and politicians – they could not look far enough into the future. They could not take political risks now, in return for the long term safety of the planet.

As humans we cannot engage with complex long term problems. We favour short term comfort over long term safety, even when this is illogical. Our political systems are set up to favour short term political wins. Our politicians think only as far ahead as the next election. This failure to stop climate change was no one’s fault, ‘Losing Earth’ argues. It happened because we’re human, and because our electoral systems aren’t geared up for this kind of problem.

But is this really why the US didn’t act on climate change during the 1980s?

The late 70s and 80s were also a time when the economies of most developed countries underwent a fundamental restructuring.

Since the end of the Second World War the economies of Europe and the US had been growing steadily. Ordinary people had been taking home and ever growing slice of this new economic growth. In the US, unionised workforces were consistently negotiating better pay and conditions. In Europe people also began to see the benefits of nationalised healthcare and house building.

The very richest people in society had also been getting richer as developed economies grew. But the slice of the pie they were keeping was shrinking. In 1940 the wealthiest 0.1% kept about 20% of all the money earned. While the poorest 90% (almost everyone) kept about the same. By the mid 70s the slice kept by the 0.1% had dipped to around 7%, while the slice kept by the 90% had climbed to over 30%. The US economy was still vastly unequal, but it was becoming more equal. Many working people were gaining, at the expense of very rich. 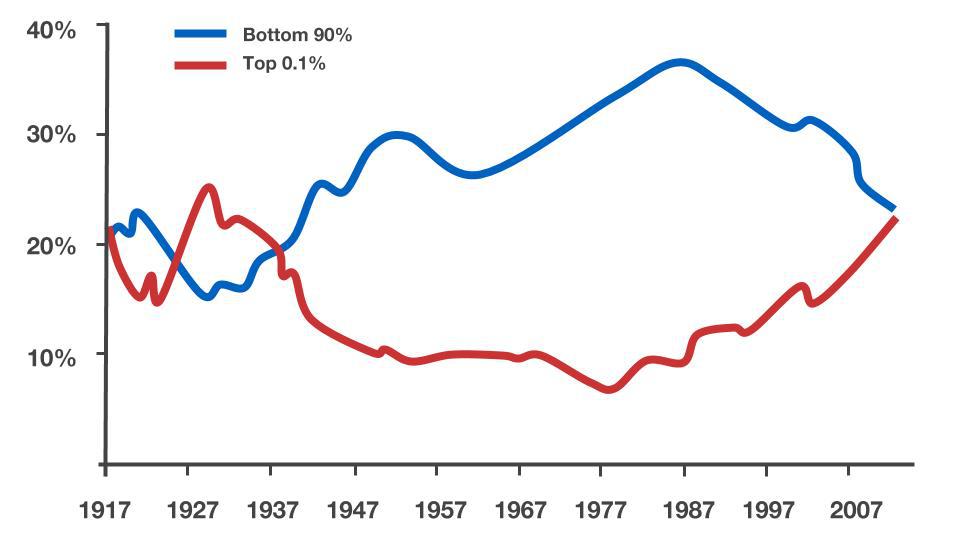 We should not pretend that the gains of working people were evenly shared. These figures disguise cruel inequalities amongst the 90% shaped by race, religion, gender and geography.

By the middle of the 1970s it was clear to the wealthiest in society that something had to change. More and more of the spoils of economic growth were going into the pockets of ordinary people. Across the Western world, governments were taxing growing profits and spending them on housing, healthcare and education – mainly for the benefit or ordinary people.

The economy, and people’s expectations of it, needed a shake up. Crucially, a shake up that reversed the growing trend of economic equality. A shake up which would return the 0.1% to the position they had been in during the 1930s and 40s when they were keeping a much greater cut of the all the money that was earned.

To do this they turned to a collection of political ideas that had been largely ignored since their formation in the 1920s. These ideas and the economies shaped by them have come known as neoliberalism.

These ideas held that the role of the state should shrink. Government – neoliberals believed – stood in the way of prosperity. The size of the state should be reduced, the number of people on the public payroll should go down. Areas that had been the domain of government – healthcare, house building, transport, energy – should no longer be. Instead these should become the domain of private enterprise.

Markets should decide what receives investment and what does not. If there is demand (say) for new energy generation then the price of electricity should provide the signal for power companies to build it and profit from doing so. The government should step back and let the market decide what happens.

In addition, regulation and corporate taxes of all kinds should be stripped back. This – they argued – would drive more investment. Environmental regulation controlling pollution simply prevented businesses providing energy to people cheaply, they argued. Taxes on polluting substances did the same. Stripping these away – they argued – would give people what they wanted. In place of regulation the proposed consumer choice. If people wanted non-polluting products – if that mattered to them – they would pay extra for them. And businesses would respond to this demand by providing them.

The ideology and the practice of neoliberalism were not always consistent. While the ideology demanded the withdrawal of the state, many private businesses continued to demand (and receive) vast government subsidies. In the US during the 1980s the government continued to sponsor billions of dollars worth of research into fossil fuel extraction.

For an introduction to the rise of neoliberalism these podcasts are very good.

The impact of these changes on the overall economy was also well understood by those who proposed them. As responsibility for infrastructure, energy, housing and the other usual domains of the state – moved to the private sector so did the money. These became new areas in which to make profit. The lack of regulation, lower taxes and subsidies meant making these profits was easier.

The wealthiest 0.1% began to see their share of the society’s wealth increasing. Starting around 1974 the economy swung around in favour of the richest. Their slice of all the money earned began to climb, while the slice taken home by the 90% began to fall. This trend has continued until now. In the US levels of income inequality have returned to where they were before the Second World War. This was the drive behind this vast shake up, and it worked.

The reshaping of the US economy took place during the period covered by ‘Losing Earth’. It was during the decade – 1979 to 1989 – that neoliberalism truly entered the political mainstream.

In order to address climate change the US (and other nations) needed to do things that were no longer politically possible. Fossil fuels needed to be taxed in order to reduce their consumption. Carbon emissions needed to be taxed, or capped. The government needed to invest heavily in renewable energy. Or it needed to force energy companies to do so through legislation.

These things might have been possible in previous decades, when governments saw this kind of investment and legislation as their job. But in this new neoliberal era, these kind of interventions were impossible – especially for the US.

So the US government’s failure to act was not a political or human accident as ‘Losing Earth’ holds. Rather, the economy of the US had very deliberately been re-shaped. It had been re-shaped in order to return economic advantage to the very wealthiest people, who had been losing that advantage over several decades. However in doing this, the US government had stripped itself of the tools it needed to address climate change – regulation of polluting businesses, taxation of carbon emissions and state investment in energy alternatives.

We did not lose the earth in the 1980s. Rather, the tools governments needed to act had be taken from them.