During Naked Capitalism’s comment holiday, Yves and I visited the Maine Narrow Gauge Railroad Co. & Museum in Portland, before the meetup. Unfortunately, we arrived to late to take the “leisurely train ride” along the Eastern Promenade of Casco Bay, which I’m sure would have been very pleasant. (There are also operating two-footers at the Wiscasset, Waterville & Farmington Railway Museum up in Alna, at the Sandy River and Rangeley Lakes Railroad in Phillips, and at a “railway village” in Boothbay.) This post is a trip report from that visit, with some comments on the history and economics of Maine’s unique narrow-gauge system, followed by a fanciful policy proposal.

First, the trip report from the Portland Museum. A diminutive (ok, “cute”) locomotive: 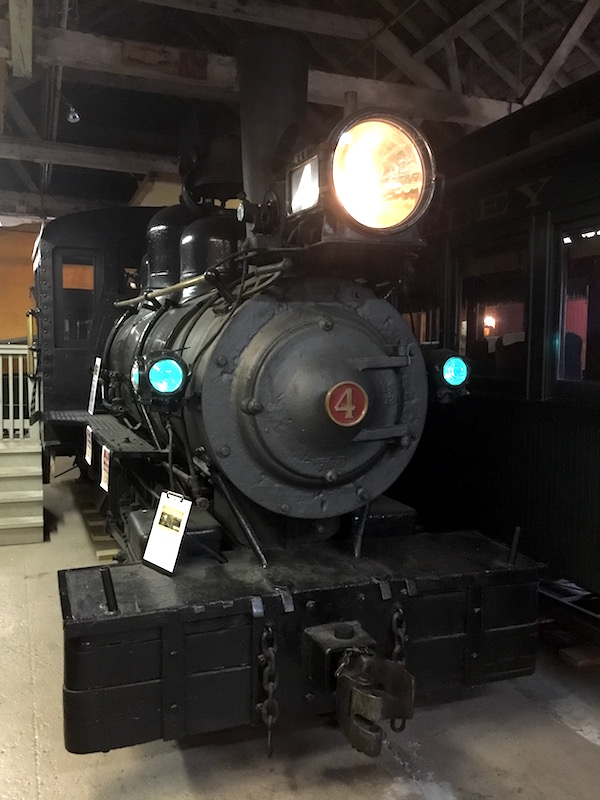 The locomotive cab, showing the careful but amatuer labels (amateur volunteers being a good thing): 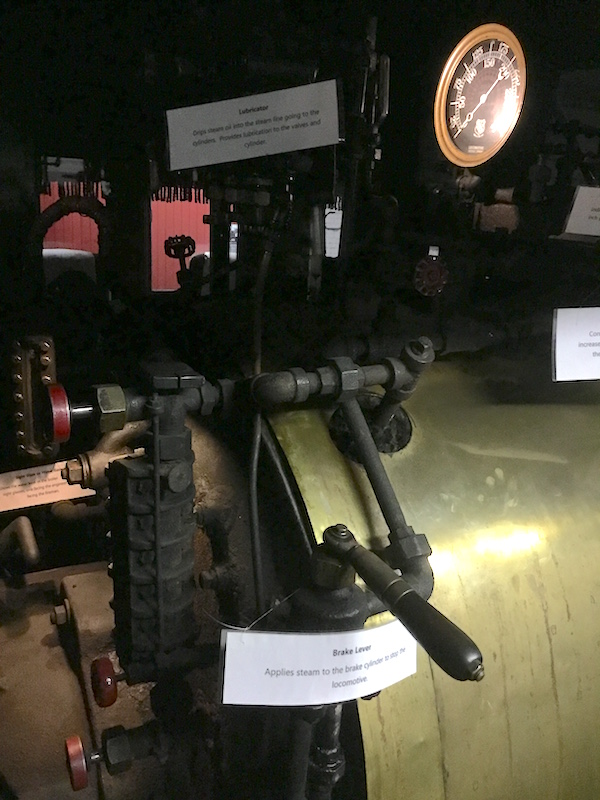 The incredibly ornate woodwork of a passenger car’s vestibule: 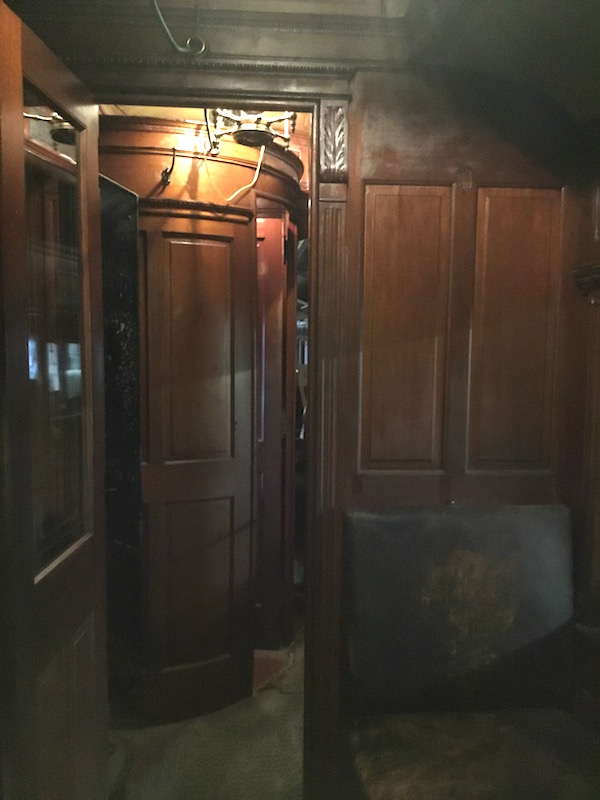 (Yes, I’m photographing it with the camera of a powerful, computing slab of glass connected to the Internet, but that doesn’t mean we could afford that woodwork today, or even know how to manufacture it.)

A chair car, with IIRC custom-made chairs to fit the narrow width of the car: 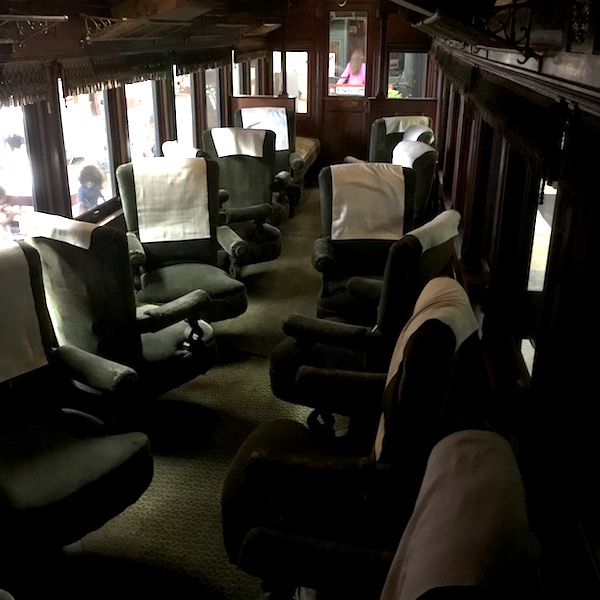 A caboose, showing the width of the two-foot gauge. That’s really narrow! The two-footers served a not-neglible area in Maine. Here’s a map: Maine: An Encyclopedia, describes their origin:

The idea of a two foot railroad developed after George Mansfield of Massachusetts visited Wales in the 1870’s and saw the Ffestiniog Railroad (which was actually only 23 1/2 inches wide)… the world’s first narrow-gauge public railway.

At their peak, the Maine Two-Footers operated on over 200 miles of track transporting both passengers and freight in and out of rural Maine. They played a key role in the timber industry as well as early tourism efforts. These companies were the smallest narrow gauge common carrier railroads in the United States. Track gauge is measured between the inner faces of the load-bearing rails. Gauge matters because all of the equipment running within a network needs to have running gear to match the gauge. The U.S. standard railroad gauge is 4 ft. 8.5 in. Maine had a unique system of narrow gauge railroads on track just 24 inches apart developed to lower the cost of railroad construction and operation, allowing them to be built in areas where it would not otherwise be economically feasible.

A model railroader from Australia (!) documents two of the lines:

The [Sandy River and Rangeley Lakes Railroad (SR&RL)] was the largest and most financially sound of the Maine two-footers. Its prime focus was moving lumber from the timber-getting areas to the various mills on the road, and moving timber products to a connection with the Maine Central at Farmington. The mills were either plywood mills or turning mills producing things like axe handles, broom handles, and toothpicks. At one time Strong was the (self-proclaimed) toothpick capital of the world. The mills required logs in 6 to 8 foot lengths, so the SR&RL had none of the log bunks usually associated with logging operations. The SR&RL was also home to a series of baggage/combine/cabooses and to a number of rail busses in later years.

[The Wiscasset, Waterville, & Farmington (WW&F)] was basically a granger road, bringing farm products (mostly milk and potatoes) to the dairies in Wiscasset, and transporting farm supplies and mail back. Because its key commodity was so perishable, the WW&F ran a very tight ship in regard to the speed and scheduling of milk and express (usually combined) trains.

The last line closed in 1943. Most of the lines became the victims of competition with trucks.

(Maintenance was also an issue for these low-margin operations, which is an argument for “publicization.”) Or, rather, to the fossil fuel-dependent transportation system that included trucks.

To the fanciful policy proposal. Here’s the best map I could find of the Maine railroad system as it at the beginning of the twentieth century. The red lines are the Maine Central, but other railroads are shown with thin grey lines. There’s even rail service in the unorganized territories! (I’ll get to “Why not?” in a minute.) 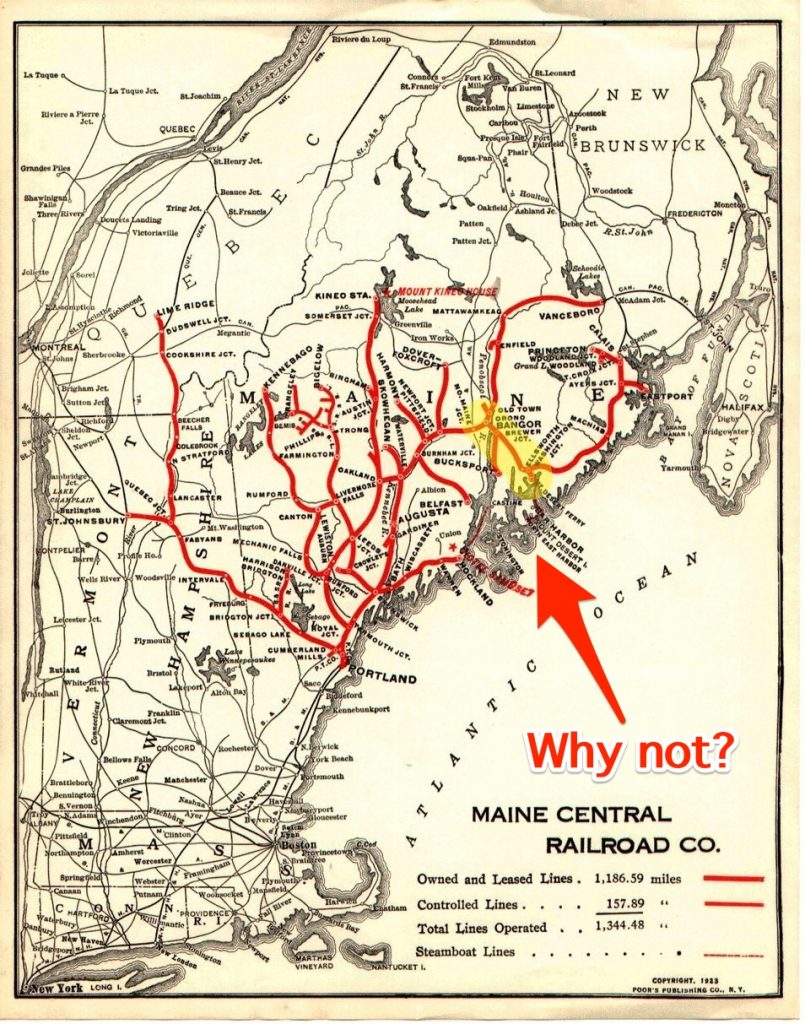 I think intermittently, though perhaps more than most, of what William Gibson has called “The Jackpot“; for which read collapse. It seems evident, even today, that fossil fuel (gas) vehicles running over fossil fuel (tar) roads really aren’t long for this world; even today, localities are reverting to gravel (if “reverting” is the word I want). And electric vehicles, their supposed replacements, depend on an extremely complex and fragile supply chain that may not be long for this world, either. But was the Maine transportation system of 1923 — a thick network of railway lines, with smaller vehicles[2] connecting the stations to local destinations as feeders — so very bad, really?

Bringing me to my policy proposal: I think the great state of Maine should revive the two-footers with a view toward making them our primary transport medium after the Jackpot. I don’t think that’s how one would sell the project, but that would be the ultimate goal. The arrow labeled “Why not?” points to first route I suggest, which is highlighted: From Bangor to Bar Harbor. You will note that there’s already roadbed on that route, from trackage abandoned by Maine Central.

The business case for the (state-owned) Bangor & Bar Harbor Railway would be — as for so much else in Maine — tourism, from the cruise ships at Bar Harbor; a day trip through the Maine country-side to whatever destinations would spring up in Bangor would be quite pleasant[3]. The business case would also include ordinary passenger transport. The lower construction and operation costs of the two-footers apply just as much today as they did a century ago. The locomotives, besides being cute, would be — naturally — steam, and fired by wood, which Maine has in plenty. (Building the locomotives and the rolling stock would also be a new light industry for Maine.) There would be, no doubt, howls of protest at the use of tax money; but the (fossil fuel-based) road system has enormous public subsidies, and we have to either cut those back, or have the Jackpot cut them back for us. Why not get out in front of the problem?

Of course, I welcome commentary from actual transportation experts, being myself but a humble railfan!

[1] I can’t seem to find the sketch where Dodge’s protaganist takes the train home on the day the railroad closes down. The conductor calls out a magnificent list of station names, and we hear the receding train whistle. “And in a minute, she’ll be gone.”)

[2] I’m eliding “horse-drawn” because it’s possible that somebody who’s thought through these transportation issues more deeply than I have may have a different solution.

[3] Several of the museums run “ice cream trains.” How about a “lobster train”? Or a blueberry train in the morning, and a lobster train on the return trip? Yes, that would require a dining car. And?