Yves here. I hate to sound like my usual nay-sayer self, but as a young thing, it seemed obvious that that idea that women could have it all, which meant a career and a family, was a myth. I do know women who have done it, but in the majority of those cases, either the wife or the husband has such a high income that they could afford a full time nanny (one woman I know had two). And those women, unlike aristocrats of the past who were perfectly content to fob off children to nannies and governesses, the women who had good nannies often felt the most guilty because their kids seemed to be developing stronger ties to them than to their mother.

But this post also discusses how “employment costs” of motherhood have increased because women spend more time childrearing…and query how much of that extra time is necessarily all that beneficial to the child. I’m thinking of changes like parents being expected to pick up their kids from school rather than letting them walk home and the pervasiveness of “play dates” (which entail parental scheduling and shuttling) as opposed to kids being trusted to organize their own time and get home by a specified hour.

Despite women having surpassed men in earning college degrees, having children later than ever, and accumulating increasing amounts of on-the-job experience, convergence in labour force participation between men and women has stalled. This column argues that one reason for this is women failing to anticipate the effect that children will have on their careers. The findings also suggest that the employment costs of motherhood have risen unexpectedly, and especially so for educated mothers.

Women’s lives have changed drastically over the past century. Women have surpassed men in earning college degrees, and they are having children later than ever, accumulating increasing amounts of on-the-job experience. Yet, since about 1990, convergence in labour force participation between men and women has stalled, even as societies have made progress on workplace gender discrimination (Blau and Kahn 2017). Why has this stalling occurred, especially as women are more prepared for the labour market than ever?

In a new paper, we propose a novel explanation for this phenomenon – that when they are making their key human capital decisions, women do not anticipate the effect that children will have on their careers (Kuziemko et al. 2018). We conclude with some speculations as to why and focus on a key trend – that the employment costs of motherhood have risen unexpectedly, and especially so for educated mothers.

Children continue to pose a considerable cost to careers, and that cost is disproportionately borne by women. Recent studies by Angelov et al. (2016) and Kleven et al. (forthcoming) using rich administrative data from Sweden and Denmark, respectively, provide compelling evidence that women’s careers diverge from that of men’s only after the birth of the first child.  Using several nationally representative longitudinal datasets in the US and the UK, we replicate these findings, and estimate that in the five to ten years after birth, women’s employment rates decline by about 25-40 percentage points and show little evidence of recovery relative to the counterfactual no-baby trend (Figure 1 for the US). For men, we find little to no analogous effect. 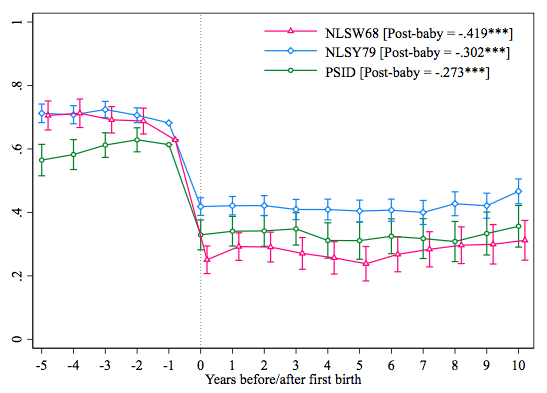 Our focus, however, is not primarily on these child penalties, but instead on why women continue to invest so heavily in their human capital development and yet drop out of the labour force at such high rates upon motherhood. We provide several pieces of evidence that suggest a potential role of the lack of anticipation of the career costs of motherhood, both in the short run and in the long run.

If women are not fully anticipating the employment effects of motherhood, we would expect that the birth of the first child serves as an information shock, causing them to update their beliefs regarding their ability to maintain both family and work commitments. Consistent with this idea, we find that women become more traditional in their attitudes about gender roles regarding work and family after the birth of their first child. For example, after becoming a mother, a woman is more likely to agree with statements such as “A family is harmed when the mother works outside the home,” and disagree with statements such as “Both a husband and a wife should contribute to household income.” Using an index of gender role attitudes that we construct using the available questions in each dataset, we find that women’s attitudes become significantly more ‘anti-work’ in the first two years post-baby and exhibit no recovery in the five years after birth (see Figure 2 for the UK). In fact, in the UK, women’s attitude change post-baby is morethan the average difference in gender-role attitudes between men and women. Interestingly, college-educated women appear most caught off-guard by motherhood, as they experience a larger ‘anti-work’ shift in their views than non-college-educated women. We find little evidence of a significant shift in men’s attitudes. 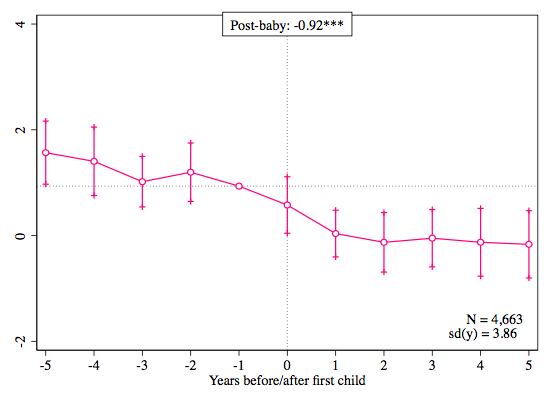 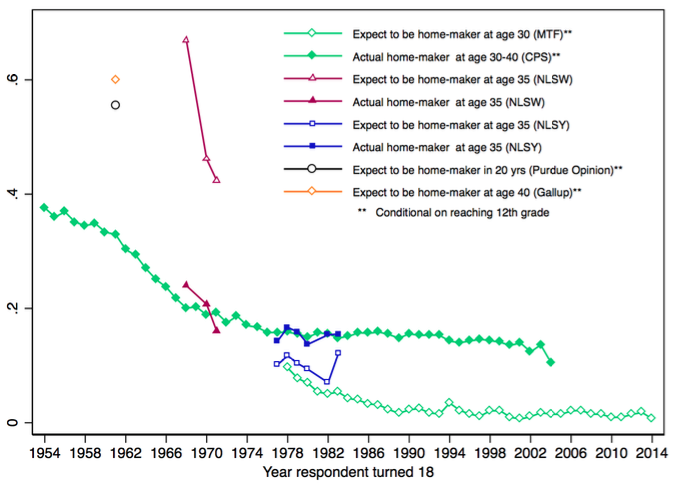 Why has this reversal in expectations versus reality occurred? We argue that the employment costs of motherhood play a key role and, specifically, that across generations, there has been an unexpectedincrease in these employment costs. Several papers have emphasised the decline of costs of motherhood as a key driver of the rise in female labour force participation over much of the 20thcentury. For example, electrification that led to the widespread adoption of labour-saving household appliances (Greenwood et al. 2005) and medical innovations such as reduced morbidity associated with childbirth and infant formula (Albanesi and Olivetti 2016) enabled women to better reconcile work and family responsibilities, allowing them to enter the labour force in large numbers.

More recent data, however, suggest that these trends may have played out and employment costs of motherhood may, in fact, have risen for more recent cohorts of women. Time-use surveys document that time spent on childcare rose drastically around 1990, and especially so for college-educated mothers (Ramey and Ramey 2010). Figure 4 plots these time-use estimates, as well as other indicators that suggest that the employment costs of motherhood at different child ages have risen for more recent cohorts of new mothers. 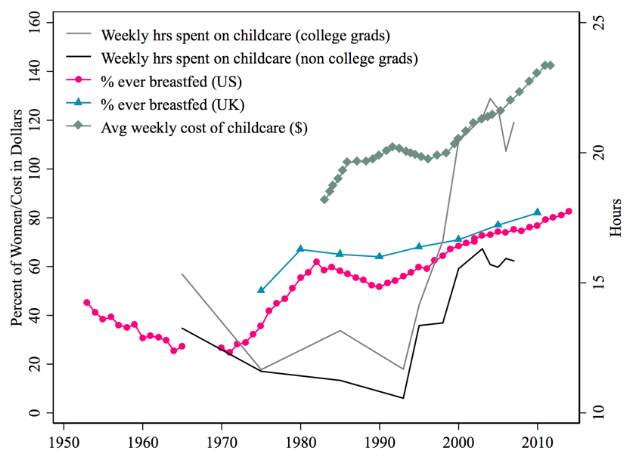 Childcare costs over the past 50 years have roughly followed a U-shape. For example, breastfeeding rates fell in the 1950s and 1960s (in the US) but then began rising again in the 1970s. Other proxies for employment costs of motherhood, such as the dollar cost of childcare, have also been on the rise in the recent few decades.

Researchers have puzzled over the stalling of the gender gap in labour force participation, especially given concurrent trends that suggest that women have been investing increasingly in human capital accumulation. We propose a novel explanation for this puzzle: that when women are making key decisions about human capital investment, they underestimate just how costly child-rearing will be to their careers. We use several pieces of evidence to provide support for our hypothesis. Most notably, women (but not men) become more ‘anti-work’ in their attitudes about gender norms regarding work and family upon becoming mothers, and educated mothers are most surprised by the employment costs of parenthood. Over the longer run, cohorts of graduating female seniors once overestimated the probability that they would stay at home and raise children, while more recent cohorts of graduating seniors now increasingly underestimate that probability. We provide some speculative evidence that rising costs of childcare, after decades of decline, may be responsible for this lack of anticipation on women’s part. To address the remaining gender gaps in the labour market, there is a pressing need for future work to examine the underlying causes of this apparent increase in the employment costs of motherhood.