Yves here. It should not be news that inequality imposes a health cost even on the wealthy, including on mental health.

By Tabita Green is a worker-owner at New Digital Cooperative, a digital communications firm based in northeast Iowa, and a new economy advocate. Follow her on Twitter @tabitag. Originally published in the  The Mental Health issue of YES! Magazine.

n early June of this year, the back-to-back suicides of celebrities Anthony Bourdain and Kate Spade, coupled with a new report revealing a more than 25 percent rise in U.S. suicides since 2000, prompted—again—a national discussion on suicide prevention, depression, and the need for improved treatment. Some have called for the development of new antidepressants, noting the lack of efficacy in current medical therapies. But developing better drugs buys into the mainstream notion that the collection of human experiences called “mental illness” is primarily physiological in nature, caused by a “broken” brain.

This notion is misguided and distracting at best, deadly at worst. Research has shown that, to the contrary, economic inequality could be a significant contributor to mental illness. Greater disparities in wealth and income are associated with increased status anxiety and stress at all levels of the socioeconomic ladder. In the United States, poverty has a negative impact on children’s development and can contribute to social, emotional, and cognitive impairment. A society designed to meet everyone’s needs could help prevent many of these problems before they start.

To address the dramatic increase in mental and emotional distress in the U.S., we must move beyond a focus on the individual and think of well-being as a social issue. Both the World Health Organization and the United Nations have made statements in the past decade that mental health is a social indicator, requiring “social, as well as individual, solutions.” Indeed, WHO Europe stated in 2009 that “[a] focus on social justice may provide an important corrective to what has been seen as a growing overemphasis on individual pathology.”

The UN’s independent adviser Dainius Pūras reported in 2017 that “mental health policies and services are in crisis—not a crisis of chemical imbalances, but of power imbalances,” and that decision-making is controlled by “biomedical gatekeepers,” whose outdated methods “perpetuate stigma and discrimination.” Our economic system is a fundamental aspect of our social environment, and the side effects of neoliberal capitalism are contributing to mass malaise.

In The Spirit Level, epidemiologists Kate Pickett and Richard G. Wilkinson show a close correlation between income inequality and rates of mental illness in 12 Organisation for Economic Co-operation and Development member countries. The more unequal the country, the higher the prevalence of mental illness. Of the 12 countries measured on the book’s mental illness scatter chart, the United States sits alone in the top right corner—the most unequal and the most mentally ill.

The seminal Adverse Childhood Experiences Study revealed that repeated childhood trauma results in both physical and mental negative health outcomes in adulthood. Economic hardship is the most common form of childhood trauma in the U.S.—one of the richest countries in the world. And the likelihood of experiencing other forms of childhood trauma—such as living through divorce, death of a parent or guardian, a parent or guardian in prison, various forms of violence, and living with anyone abusing alcohol or drugs—also increases with poverty.

Clearly, many of those suffering mental and emotional distress are actually having a rational response to a sick society and an unjust economy. This revelation doesn’t reduce the suffering, but it completely changes the paradigm of mental health and how we choose to move forward to optimize human well-being.

Instead of focusing only on piecemeal solutions for various forms of social ills, we must consider that the real and lasting solution is a new economy designed for all people, not only for the ruling corporate elite. This new economy must be based on principles and strategies that contribute to human well-being, such as family-friendly policies, meaningful and democratic work, and community wealth-building activities to minimize the widening income gap and reduce poverty. 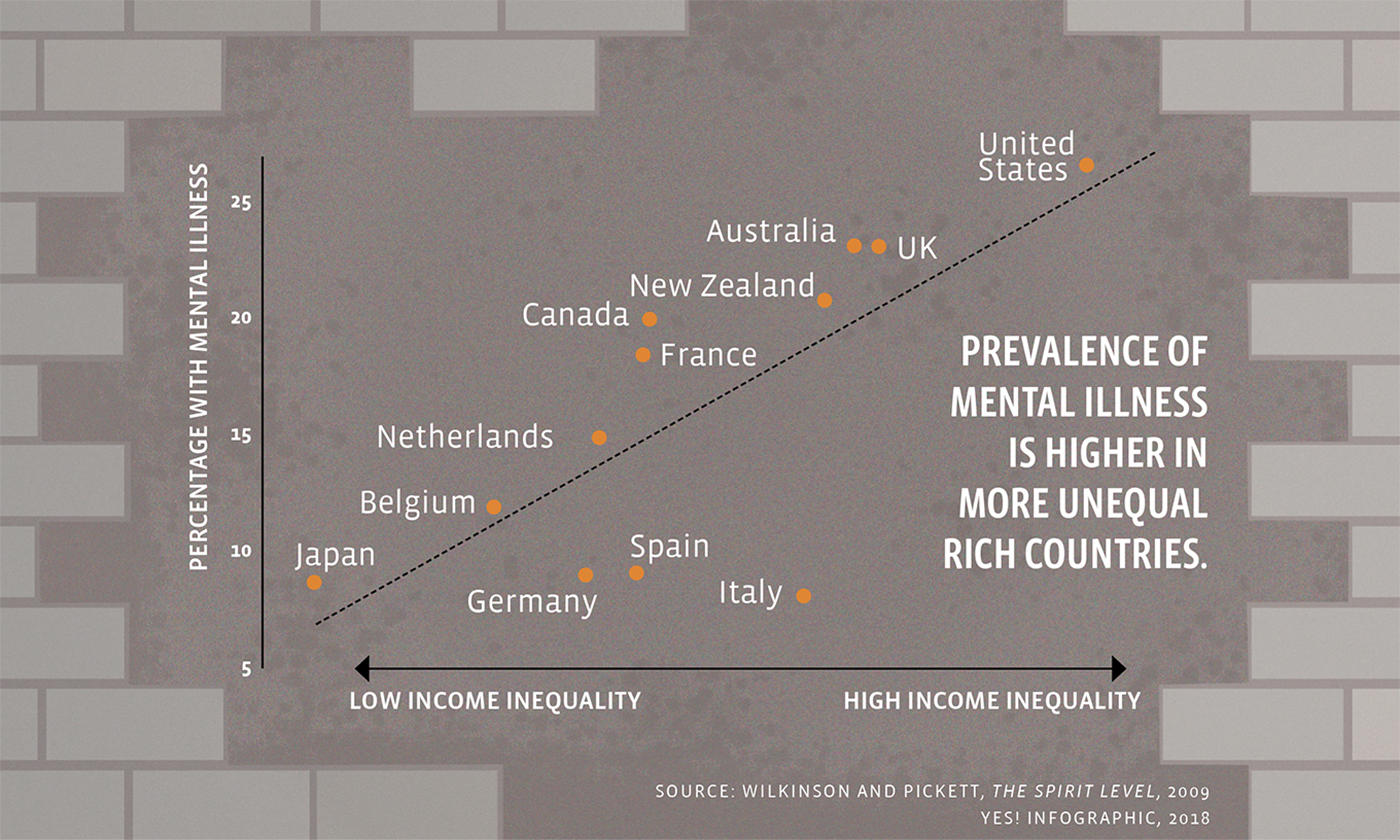 The seeds of human well-being are sown during pregnancy and the early years of childhood. Research shows that mothers who are able to stay home longer (at least six months) with their infants are less likely to experience depressive symptoms, which contributes to greater familial well-being. Yet in the United States, one-quarter of new mothers return to work within two weeks of giving birth, and only 13 percent of workers have access to paid leave. A new economy would recognize and value the care of children in the same way it values other work, provide options for flexible and part-time work, and, thus, enable parents to spend formative time with their young children—resulting in optimized well-being for the whole family.

In his book Lost Connections, journalist Johann Hari lifts up meaningful work and worker cooperatives as an “unexpected solution” to depression. “We spend most of our waking time working—and 87 percent of us feel either disengaged or enraged by our jobs,” Hari writes.

A lack of control in the workplace is particularly detrimental to workers’ well-being, which is a direct result of our hierarchical, military-influenced way of working in most organizations. Worker cooperatives, a building block of the solidarity economy, extend democracy to the workplace, providing employee ownership and control. When workers participate in the mission and governance of their workplace, it creates meaning, which contributes to greater well-being. While more research is needed, Hari writes, “it seems fair … to assume that a spread of cooperatives would have an antidepressant effect.”

Worker cooperatives also contribute to minimizing income inequality through low employee income ratios and wealth-building through ownership—and can provide a way out of poverty for workers from marginalized groups. In an Upstream podcast interview, activist scholar Jessica Gordon Nembhard says, “We have a racialized capitalist system that believes that only a certain group and number of people should get ahead and that nobody else deserves to … I got excited about co-ops because I saw [them] as a place to start for people who are left behind.”

A concrete example of this is the Cleveland Model, in which a city’s anchor institutions, such as hospitals and universities, commit to purchasing goods and services from local, large-scale worker cooperatives, thus building community wealth and reducing poverty.

The worker cooperative is one of several ways to democratize wealth and create economic justice. The Democracy Collaborative lists dozens of strategies and models to bring wealth back to the people on the website community-wealth.org. The list includes municipal enterprise, community land trusts, reclaiming the commons, impact investing, and local food systems. All these pieces of the new economy puzzle play a role in contributing to economic justice, which is inextricably intertwined with mental and emotional well-being.

In Lost Connections, Hari writes to his suffering teenage self: “You aren’t a machine with broken parts. You are an animal whose needs are not being met.” Mental and emotional distress are the canaries in the coal mine, where the coal mine is our corporate capitalist society. Perhaps if enough people recognize the clear connection between mental and emotional well-being and our socioeconomic environment, we can create a sense of urgency to move beyond corporate capitalism—toward a new economy designed to optimize human well-being and planetary health.

Our lives literally depend on it.