This is Naked Capitalism fundraising week. 1441 donors have already invested in our efforts to combat corruption and predatory conduct, particularly in the financial realm. Please join us and participate via our donation page, which shows how to give via check, credit card, debit card, or PayPal. Read about why we’re doing this fundraiser and what we’ve accomplished in the last year, and our current goal, more original reporting.

By Julie Dermansky, a multimedia reporter and artist based in New Orleans. She is an affiliate scholar at Rutgers University’s Center for the Study of Genocide and Human Rights. Visit her website at www.jsdart.com., NY. Originally published at DeSmog Blog In Mexico Beach, Florida, Russell King’s house is the only beachfront property that survived Hurricane Michael with little damage. But the fact it survived the latest record-breaking hurricane doesn’t give King peace of mind. Can it withstand the next storm that comes its way?

Climate scientists predict that storms will continue to intensify, and King takes this to heart, worrying the next one could take down his house. I met King on October 14, four days after Hurricane Michael made landfall and wiped out a large portion of Mexico Beach, a small town on Florida’s panhandle. The storm swept into the area with winds of up to 155 miles per hour (mph), just two shy of reaching a Category 5 storm designation. 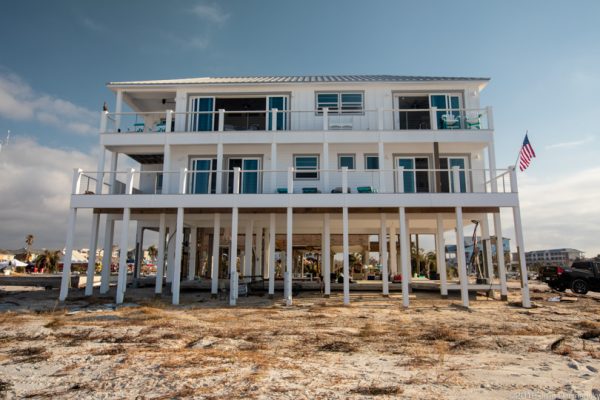 King’s home, which he owns with his nephew, Dr. Lebron Lackey, was built to withstand 240 mph winds, well beyond the standards of the current building code. Nearby houses built to the latest code all sustained substantial damage. Most of those still standing will likely need to be torn down. About a mile east on Highway 98, the main road along the coast, the top two floors of a four-story house moved from the beach to the road. The bottom floors were obliterated. 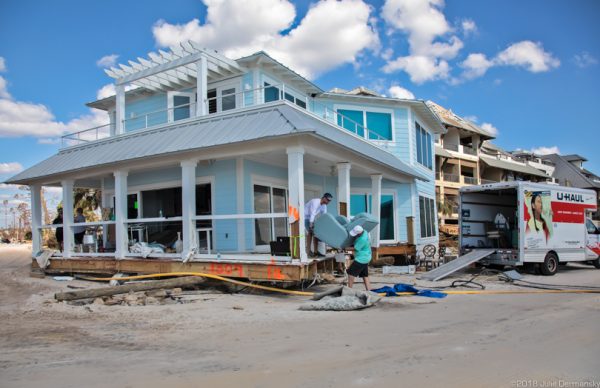 Owners of a home built to the latest building code in Mexico Beach, Florida, retrieve belongings from the top two stories that were pushed by Michael’s storm surge onto Highway 98. 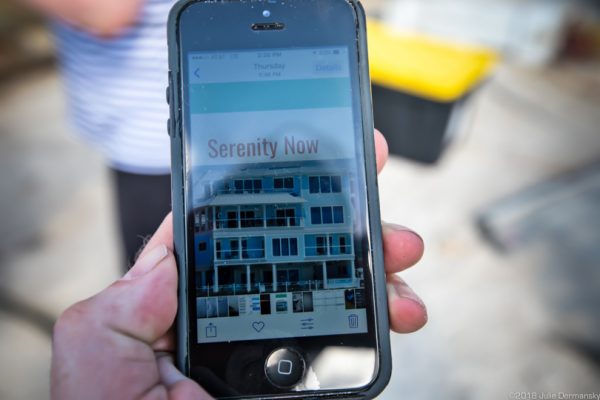 Owner shows me on his cellphone what his four story home looked like before Hurricane Michael.

I was preparing to camp out in my car on the beach near King’s home when he graciously invited me in. “We still have dry beds,” he said. That night we talked over candlelight about climate change and politics.

King, a former Air Force Lt. Colonel and practicing lawyer, is a Republican, but voted for Hillary Clinton in the last presidential election because he sees Donald Trump’s stance on climate science as a threat to the country. “Let’s get to the facts and truth, and don’t worry about if it comes from the right or the left,“ King said.

It troubles him that people are confusing the message with the messenger when it comes to science. King pleads with his climate-denier friends to watch Al Gore’s latest film, An Inconvenient Sequel: Truth to Power, and form their own opinions, rather than going along with what politicians say.

As the sun came up, we gazed out from the balcony over the destruction below. The few structures still standing appeared damaged beyond repair. Many others were completely gone. Home on Mexico Beach near the Kings’ home. “This is what my view is going to be for a long time,” King said. He worries things will never be the same there, and feels terrible for his neighbors. Many of the houses in Mexico Beach were decades old, owned by middle-class families who won’t have the money to rebuild to the current building code, even though the code is not strong enough to protect from a storm like Michael.

A command center for first responders and the military was set up to the right of his house, in the midst of an apocalyptic landscape of cars wrapped around bare trees and cement slabs where houses once stood. To the left of his house destruction stretched as far as the eye could see. The view of the beautiful beach is marred by the remains of the town’s wooden pier, now ripped apart. 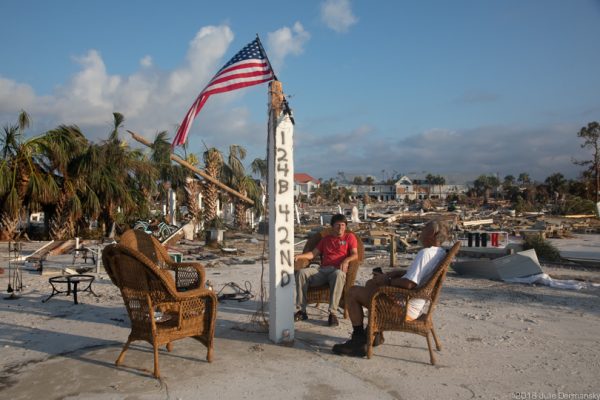 Russell King and his nephew, Dr. Lebron Lackey, in Mexico Beach, Florida, a couple blocks from their home.

“I’m tired of politicians lying to us. The American people need to understand they are lying,” King said. “The people who are denying climate change are not telling the truth.”

He likened the misinformation campaign against climate science to the campaign to protect the tobacco industry, which claimed cigarettes were no threat to human health. He was well aware that the fossil fuel industry is using the same tobacco industry playbook and lobbyists to sow doubt about climate change. “There is nothing clean about coal,” King said, just like there is nothing healthy about smoking cigarettes.

King’s nephew, on the other hand, is not convinced that humankind is playing a key role in changing the climate, despite the overwhelming scientific evidence, and doubts that there is much humans can do now to slow the warming climate. He voted for Trump and, though he doesn’t agree with everything Trump does or says, readily repeats common climate denial talking points.

On October 15, I photographed hand-painted signs on Highway 98 that said: “Make Mexico Beach Great Again.” As I focused on the signs and documented the destruction, a number of helicopters flew over, one of them with President Trump and the First Lady aboard. They were surveying the damage from the air before visiting Lynn Haven, a small town next to Panama City. 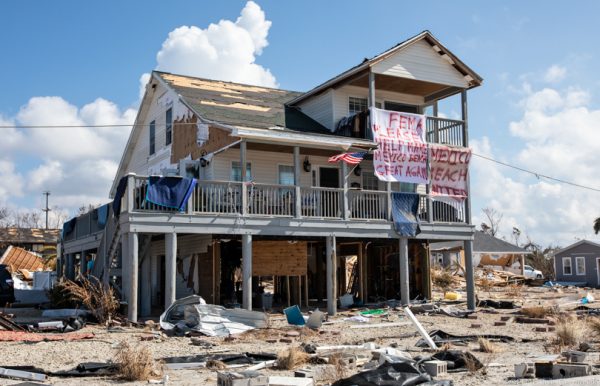 Building damaged by Hurricane Michael with a message for Trump.

Trump described the destruction as “tough to see,” but the experience had no effect on his stance on climate change. Following his visit to Florida and Georgia to see the storm’s damage, he told Leslie Stahl on 60 Minutes that he doesn’t deny climate change but then went on to say the climate would swing back on its own.

Florida Governor Rick Scott, who is trying to win a Senate seat, is, like Trump, a climate change denier. Scott reportedly banned the use of the terms “climate change” and “global warning” by the staff of the Florida Department of Environmental Protection. During an October 14 press conference at a command center outside of Panama City, he reiterated his stance that climate science is undecided.

Most of the people I spoke to in Mexico Beach held the view that the climate is changing, but that it has little to do with humankind. Despite their personal loss, they told me that they have faith that God and the Trump administration will help them rebuild. 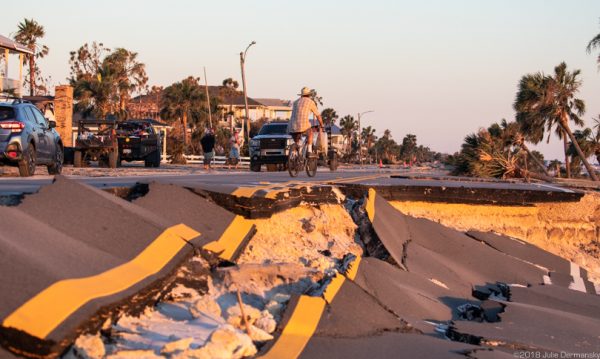 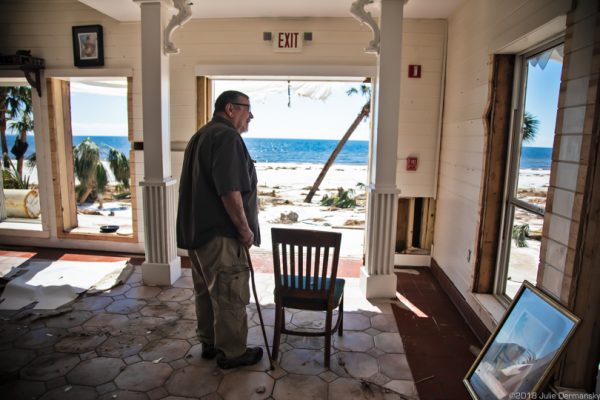 Owner of the Driftwood Inn inspecting the damage to his hotel in Mexico Beach, Florida.

I met the owner of the Driftwood Inn in front of his hotel on Highway 98. “Forty-two years down the drain,” he said, surveying the damage to his beloved inn. When asked what he thinks about humanity’s role in the recent record-breaking storms, he didn’t see a connection. He mused that Democrats will likely blame Trump for Hurricane Michael’s damage. Inside the shell of his hotel, tears ran down his face as he looked out on to the Gulf.

Further up the road, I climbed over big chunks of highway collapsed onto the beach in order to get to the El Governor Motel, an area landmark also badly damaged by the storm. There was a familiar whiff of red tide. For a moment, my breathing was restricted and the back of my throat felt scratchy.

As the storm approached, many wondered if it might break up a persistent red tide event that has lingered since last year, following Hurricane Irma and resulting in an unprecedented fishkill. I found my answer in that moment and the next day when I found dead fish along the Gulf shoreline: Hurricane Michael did not clear this persistent bloom of toxic algae affecting both Florida coasts. 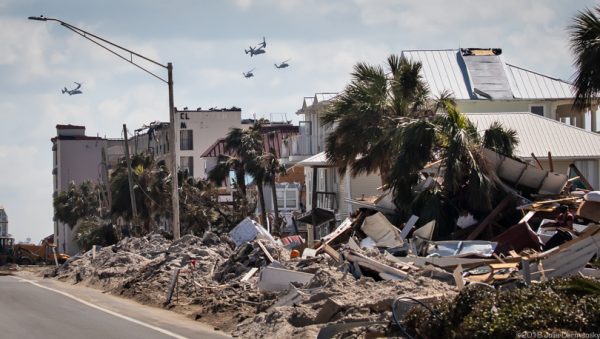 Though King was the only person I met in Mexico Beach who advocated that society should take whatever actions possible to prevent further global warming, he’s not the only one calling out politicians for their denial on climate change. The American Meteorological Society responded to President Trump’s 60 Minutes interview with a letter to Trump that both confirms the scientific consensus on climate change and states: “You also said that scientists are making this political, which is misleading and very damaging. The scientific community welcomes all who commit to the pursuit of understanding through science, irrespective of their political views, religious beliefs, and ethical values.”

King believes politicians who continue to deny science for their own personal gain lack a conscience. Though he is glad his home withstood Michael, it is little consolation to him, knowing that the path humans are on is leading to planetary peril. On my way out of the area, I stopped in front of a home in Lynn Haven that had been crushed by trees. As I photographed a sign tacked to a damaged tree offering free firewood to anyone who cut it, I ran into David Passey, an external affairs director for FEMA, who I met a few days earlier. 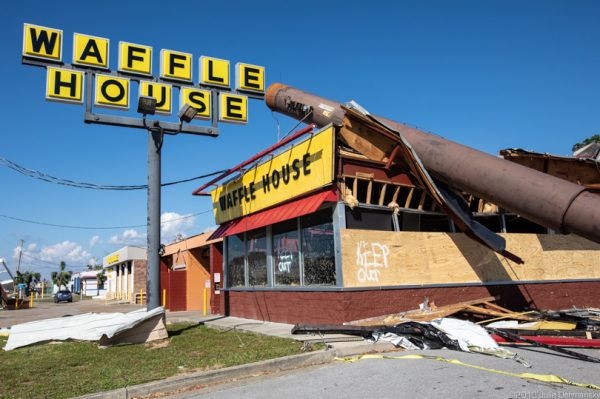 He is based in California, and said he’d be headed back west soon, where the risk of wildfires continues to rise due to warming temperatures. That morning, he received an advisory stating that power companies were preemptively shutting off power in six counties in Northern California that were under threat of a new round of fires. It was the first time he believes PG&E had taken such a defensive move. He told me the company reasoned it would lessen the damage if fire arrived, and make it possible to restore equipment faster.

Back at my desk just outside of New Orleans, I am aware that my own house would not likely survive a Category 4 storm. The National Weather Service’s storm surge chart shows my location under water with a Cat 4 storm.

With the midterm elections heating up, I reached out to climate scientist Michael Mann for his thoughts on politicians’ culpability around climate change.

He did not mince words: “Climate change-denying politicians are quite literally putting people in harm’s way by refusing to acknowledge the heightened threat posed by hurricanes supercharged by warming seas,” Mann said. “They are putting humanity in harm’s way by denying the larger climate threat and blocking policies in support of climate action.” 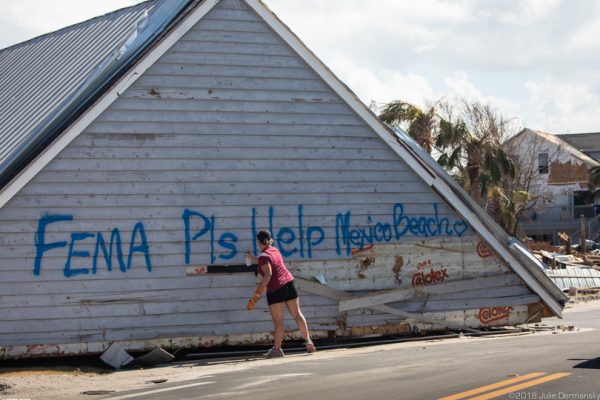 Brandy Wood Jessen spray-painting a message on the roof of a home on Highway 98 in Mexico Beach, Florida.